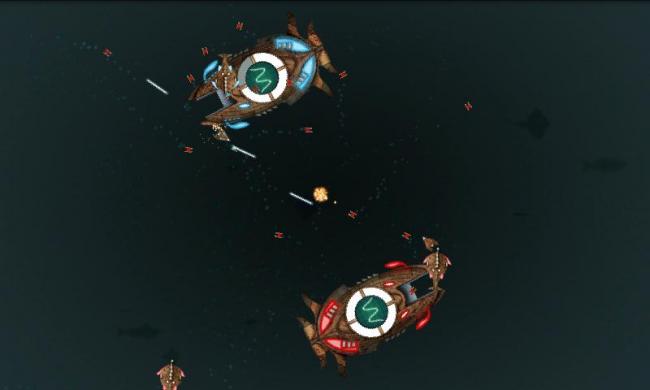 The term “Pax Brittanica” refers to a roughly one hundred year period of peace in Europe following the Battle of Waterloo in 1815. The British controlled most of the maritime trade routes and went generally unchallenged in the sea. Trade expansion was widespread for the British as they began to dominate the overseas markets. The free Android game Pax Brittanica was made by a small team of Canadians and is a futuristic one touch real time strategy game where you try to blow up a rival submarine seacraft. Hopefully the parallels are as easy to see for you as they are for me.

With any luck, what stuck out the most to you of that previous paragraph of nonsense was when I mentioned “one touch real time strategy.” Pax Brittanica (the game, not the history lesson) delivers what it promises when using that term. Players use one finger to press on the screen, and that spins the needle on a radial menu in the middle of your factory ship. The menu has four sections to choose by timing the release of your press. Three sections of the menu release a different ship, and the fourth upgrades your factory ship allowing you to gather resources faster and therefore reach the farther sections of the menu more quickly. The ships then fight and attack automatically until one of the factory ships has been destroyed.

This “one touch” control actually makes for a much more interesting take on strategy gameplay than you might initially think. A timed press in conjunction with a radial menu that awards you for your patience is the entire basis for the strategy itself. Learning how and when to think offensively or defensively is key to winning the match and keeps you on your toes. It’s easy to quickly pick up and play and you’ll appreciate the clean design and graphics.

The biggest problem with Pax Brittanica is the utter lack of content. There’s one underwater arena, one type of factory ship and only four choices on the radial menu. Even with the highest amount set for factory ship starting health, the matches don’t last longer than a couple of minutes – and they end with no fanfare other than some explosion effects overlaid on the ship that’s been defeated. The game does provide the ability to play against another human on the same device, but it’s tough for two people to huddle over such a small screen. The multiplayer is a feature adapted from its original freeware desktop release, where four people could one touch fight at the same time, and it makes more sense in that context.

There’s a really unique and intelligent strategy game at the heart of Pax Brittanica. The saving grace for the lack of content is the free price tag that accompanies the game. Otherwise it might be hard to suggest picking it up at anything more than a dollar. That said, I find myself being repeatedly drawn-in by it. There’s definitely something special here worth checking out, and even if you don’t stick around that long I guarantee you’ll be back.