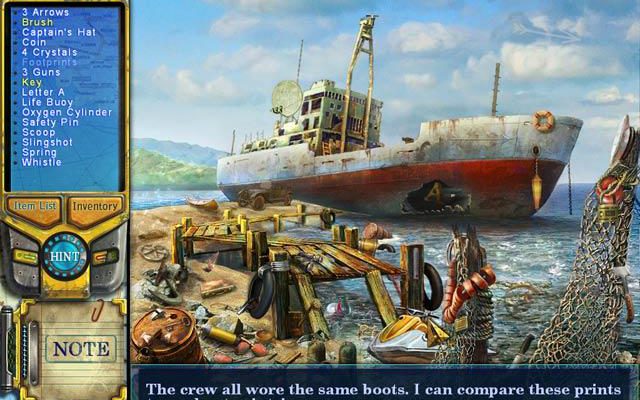 I’d like to take a moment to tell you about my new business venture, Mysterious Island Clean-up Maid Service Inc. Never would I have assumed that a mysterious island would need such a company, but after making my way from one side of a “deserted” island to another in the new hidden object game Pathfinders: Lost at Sea I can personally attest to the amount of trash strewn across the beautiful landscape.

Of course it only looks like piles of junk to the untrained eye. Hidden among the rubble are the clues to take you on a grand adventure. You and your crew set out on a boat expedition to hunt down a signal from a mystical artifact supposedly pointing you towards the lost city of Atlantis. However you wake up to find yourself totally alone on the yacht, the entire crew missing! The game follows your travels from your ship to the nearby shore, on through ancient temples and old war bunkers in search of your fellow crew members. Along the way you’ll uncover secrets both earthly and supernatural, and hopefully unravel the mystery of the island.

You’ll accomplish all this by searching the world for a wide variety of hidden objects. The scenes are varied and beautiful to look at, with small embellishments of animation to make the world look alive without being distracting to the task at hand of finding items. On the left hand side of the screen you have an alphabetized list of the items you’ll need to find in each scene displayed on your cell phone, and a big “hint” button in case you get stuck.

Not only is each scene quite beautiful, but only a few of them look alike. The designers seemed to want to make sure you weren’t stuck in the same looking environment for too long. The only real problem with the locales is the junk clutter, which only gets worse as you get deeper into the game, though I suppose that’s to be expected in this genre. I still can’t figure out why anyone would need 4 tomahawks, 5 keys and a smattering of hats sitting outside a temple, but there they were. In truth, while there are quite a few items strewn about, they almost always have a connection to the world they exist in. For example when you come across a plane wreck you need to find a propeller and control lever, or a pistol and radio in the abandoned war bunker. Sometimes you’re finding carrots or chess pieces as well, but even those items blend into the world nicely.

You’ll sometimes come across certain items that trigger a separate puzzle to solve. My favorite one had you using various weights to try and balance a scale. Each one is different and though none are difficult you can click a “skip” button to just automatically solve it and get back to the object searching if you can’t be bothered.

I only have two complaints. First is the music, which got old in about 10 minutes, and had to be turned off after about 15 minutes. I went back and turned it back on much later in the game just to see if it had changed and if it did I couldn’t tell. It sounds like a very short loop and was actively dragging down the experience of playing the game until I turned it off. Small complaint though, since it’s so easy to ignore. 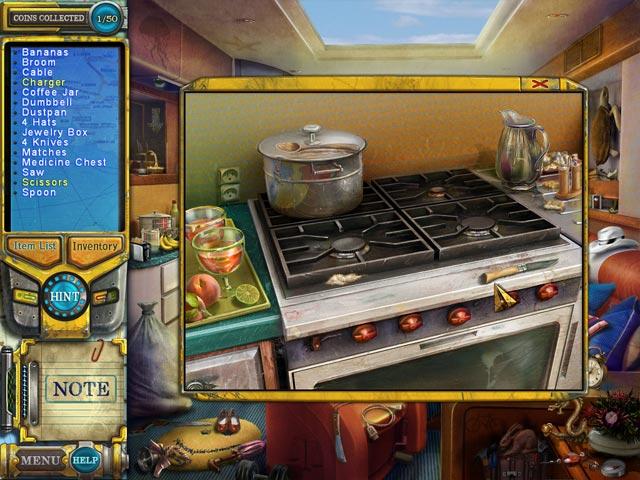 The other issue is replayability. With no other modes besides the story mode I can’t see wanting or needing to play through it again a second time. The game took me a little over four hours to complete, but I definitely sped up towards the end and I started getting used to where they liked to hide items.

Pathfinders: Lost at Sea wasn’t really a difficult game, and it really doesn’t appear that they meant it to be. Everything seems to be in place to make this a gentle, fun game. There’s no difficulty selection, no timers, no real penalty for clicking the wrong objects (the cursor spirals out of control for about two seconds) and you have pretty frequent access to a hint option that will highlight one of the objects you’re searching for.

Hidden object vets will likely find the game too easy for their tastes, but that puts the game solidly into the personal taste category. It really depends on what experience you’re looking for or what fancy you’d like to tickle.