Partyrs Review: Bring Your Own Brain 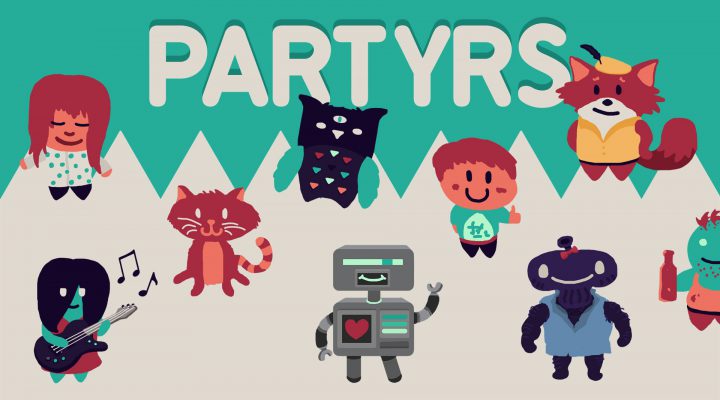 Clever logic puzzles with a surprising amount of depth and challenge.

Quirky and endearing art and characters.

A few minor bugs still need to be worked out.

Would like a couple more variations on levels and gameplay to mix things up.

Partyrs is a charming logic puzzler that breaks social gatherings down to a simple truth: most party goers come excited for one feature, and leave dejected because of another. There will be snacks, but your grade school nemesis will be present. Your best friend is going, but the music is way too loud. That guy who’s always backdoor bragging on his iPhone will definitely be there, but hey, we’ve also got robots.

The goal of Partyrs is to appease a group of picky party attendees by simultaneously satisfying everyone’s primary desire. Most of the partyrs want to be near a specific person or item—like the robot and his battery–or away from someone they’re trying to avoid—like the cat and Stan the fish. Each level has a different party layout, number of attendees, and requests. Although the parties aren’t exactly crowded, there are a limited number of standing spaces and guests need to swap spots in order to move around. To transfer one guest closer to the snack table, another will need to move. Doing so is as simple as dragging one partyr on top of another, regardless of their location: they don’t have to be standing near one another or any other physical requirement. 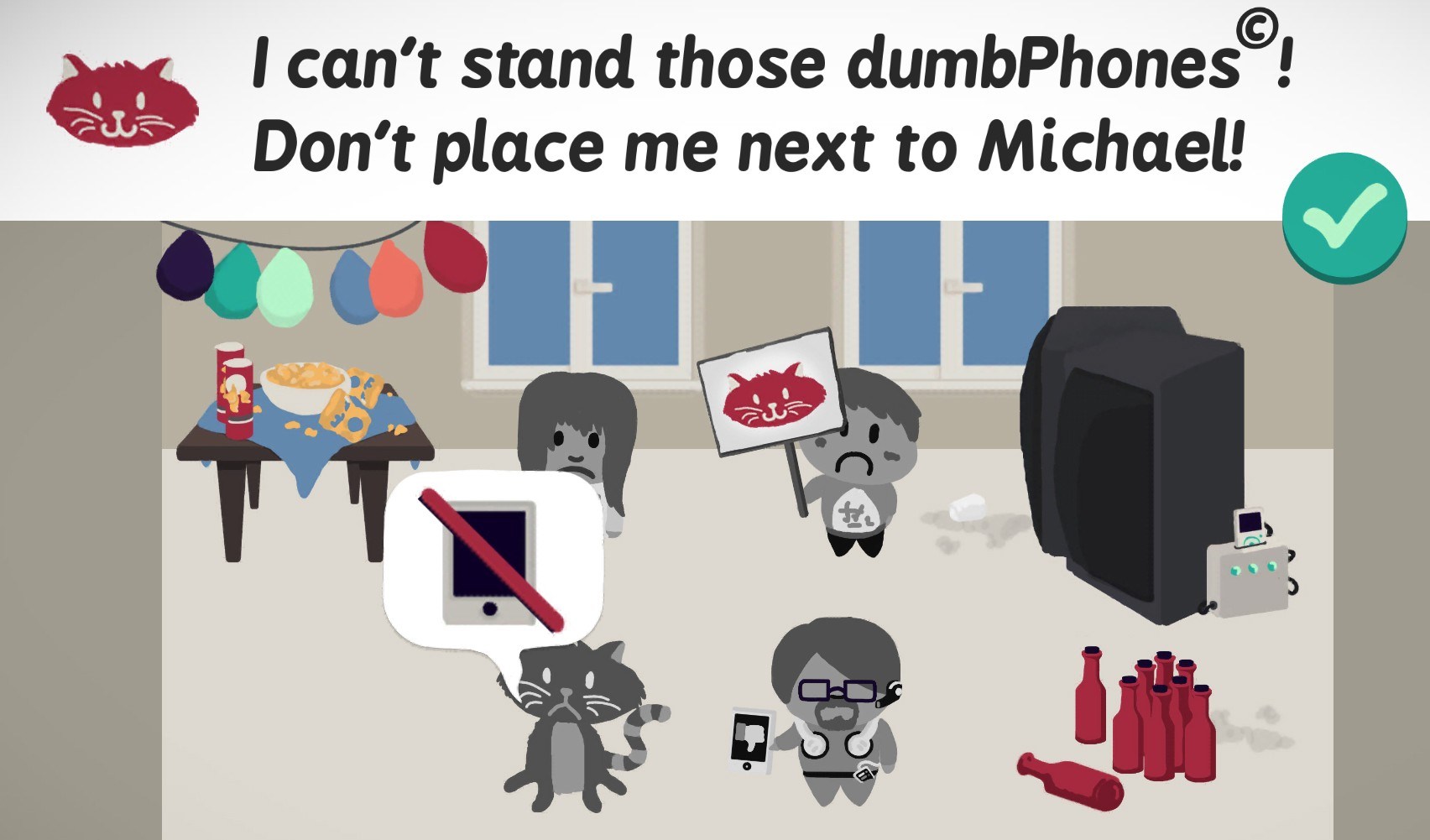 This is the sole gameplay element of Partyrs: the rest of the experience is about the puzzling challenge of soothing your guests in as few swaps as possible and the joy of meeting new, bizarre partyrs along the way. Although the partyrs don’t have overt backstories or conversations, you begin to learn their personalities as you fulfill their needs: laid-back Mia is happy as long as there’s music, Dorothy the owl likes to stick close to her friends, unkempt Borgi is just crashing for the drinks.

Fans of Adult Swim Games’ Girls Like Robots will find plenty to love in Partyrs’ quirky satisfaction Sudoku, but its focus on pleasing everyone instead of totaling up happiness points is actually more reminiscent of a Professor Layton-style brain teaser. Levels are untimed and unhurried, allowing you to concentrate on planning out your swaps and making deliberate choices. While some stages may have more than one solution—the cat could be next to the speaker or the drinks—there’s usually one best arrangement that requires fewer swaps. Figuring out that arrangement is the first puzzle, and getting there in the minimal number of swaps is the second.

Both of these challenges are often more difficult than Partyrs’ youthful graphics may indicate. While its untimed, endless-retries format is friendly to players of any age, actually three-starring the levels via the fewest swaps can be a lesson in repeated failure. However, Partyrs also has an inconsistent level of difficulty, so some stages will seem nearly impossible to three-star while others can be bested even after numerous mistakes. It’s a strange fluctuation that would have been better presented through selectable difficulty levels instead of random dips, but the overall challenge average is satisfying.

One of Partyrs’ greatest strengths is the simplicity of its presentation. Characters’ desires are visible via icons on signs they hold, or through a dialogue box that appears when you tap on them. If someone’s desire has been fulfilled, they will be colored in and smiling—otherwise, they are black-and-white and frowning. This feedback system is immediate and obvious without being distracting or cluttering the party space. We did run into an occasional bug in which a partyr was colored (or uncolored) incorrectly, or their desire-thought failed to pop up, but this mostly affected specific partyrs—such as Eggk, the mid-hatch dinosaur baby. 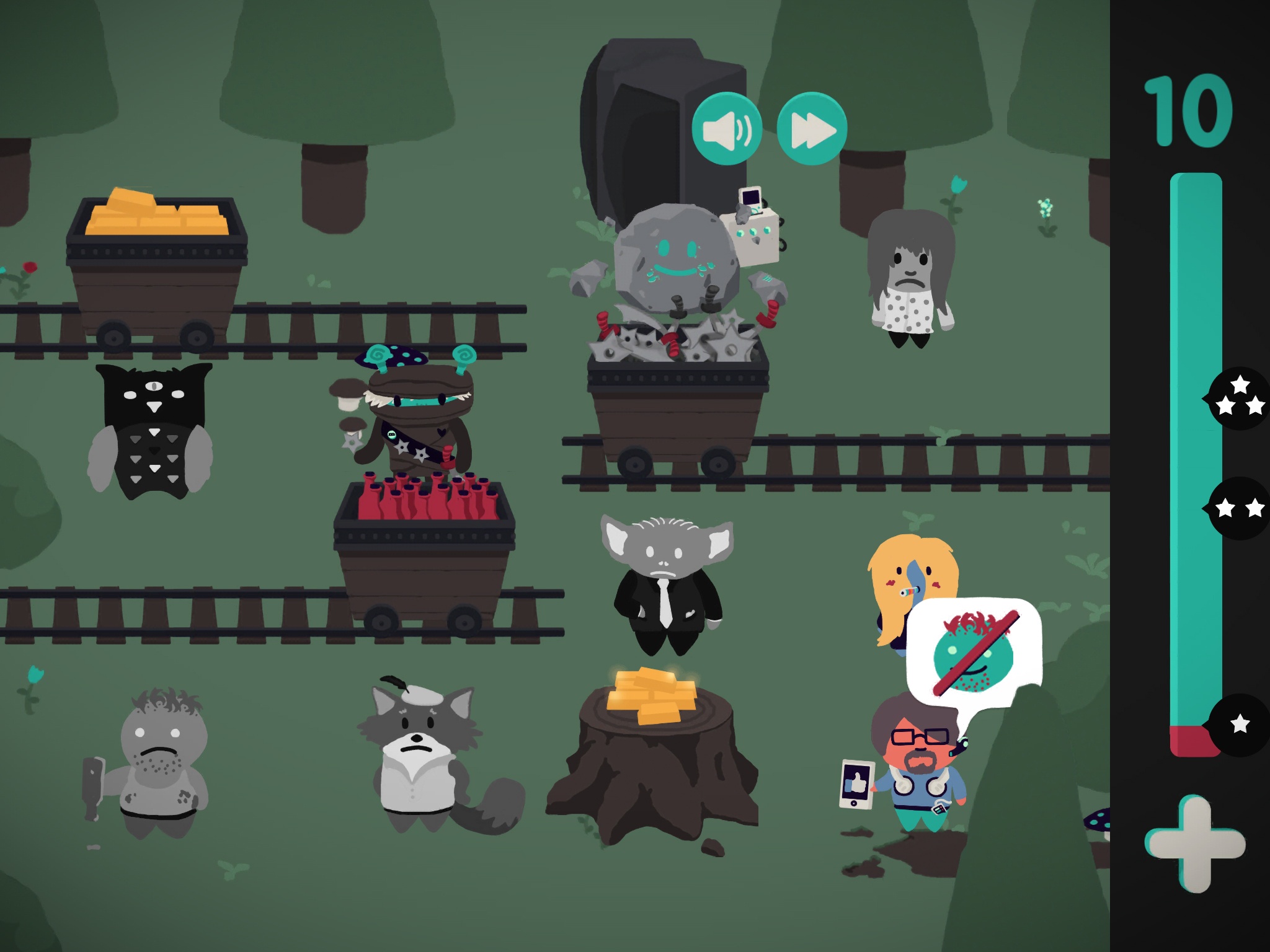 Unfortunately, this simplicity doesn’t extend to Partyrs’ map menu, which is a jumbled collection of stages accessible in somewhat random order. Each party environment—the house, forest, and space—contains about 20 stages. You only need to complete half of these to move onto the next environment, and then extra levels open up on the map. Finding these levels is almost a puzzle in itself, but it’s a surprisingly messy arrangement for such a clean and otherwise organized game.

Thankfully, we don’t need to spend too much time on the map: there’s plenty of actual gameplay to keep party organizers occupied. While every level is based on the primary goal of swapping partyrs and meeting their needs, developer Shelly Alon has incorporated a number of variations to keep things interesting. The occasional timed level offers a more frantic challenge, while each environment introduces a new feature to contend with: players will have to utilize movable carts of party favors, unmovable or sleeping guests stuck in one location, and even teleporters to keep everyone content. Little touches, like the speaker changing the background music and the partyrs’ subtle happy animations, add yet another layer of charm to an already highly endearing experience. 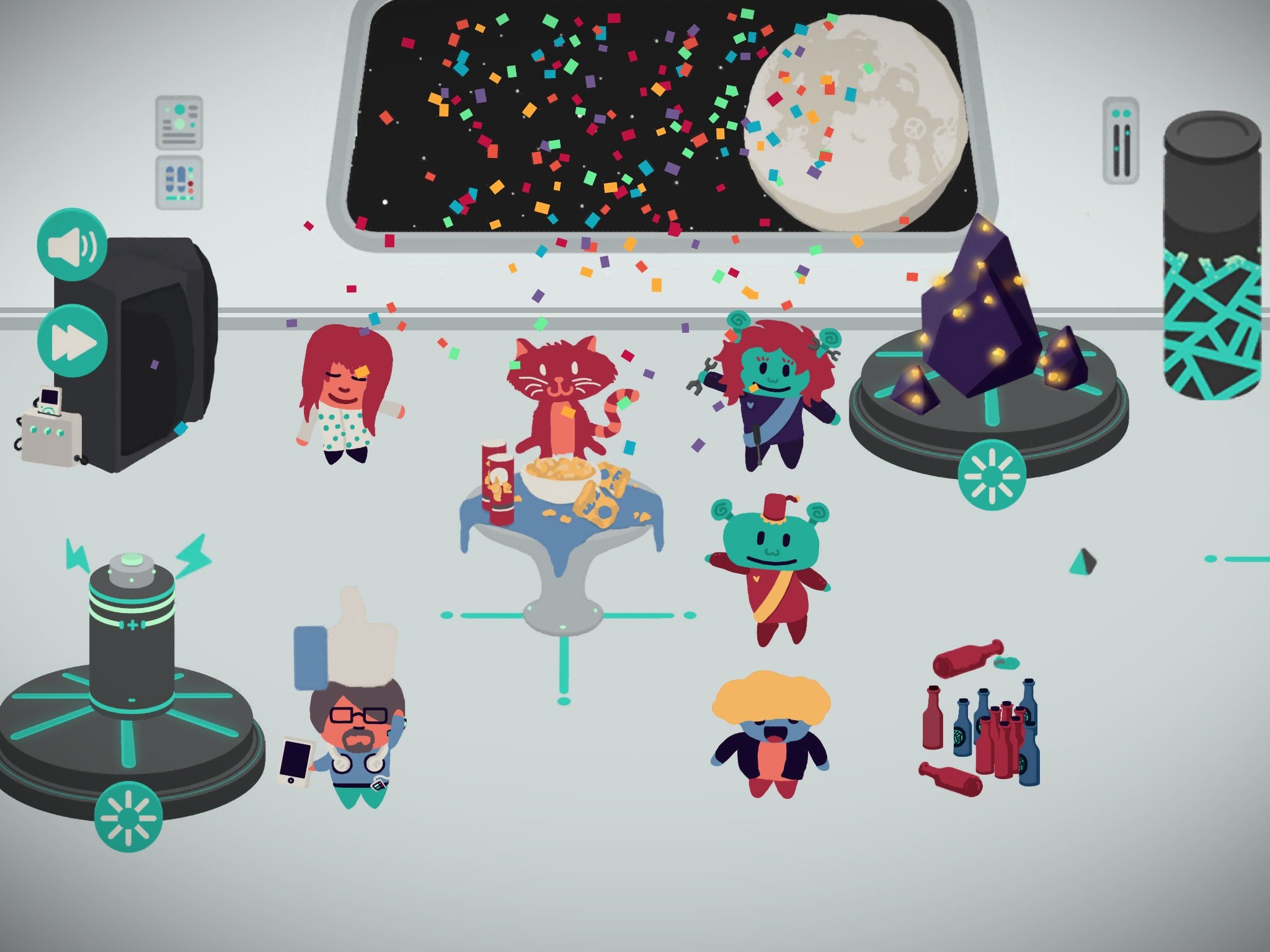 Partyrs is an easy recommendation for anyone who enjoys logic puzzles, quirky characters, and laid-back brain teasers. Its swap-based star system, generous number of levels, and surprisingly formidable difficulty offer hours of head-scratching enjoyment. A few minor issues don’t change the fact that this is a great party, worth telling your friends about.

Dragon Quest I Review: The Start of a Dragon’s Tale