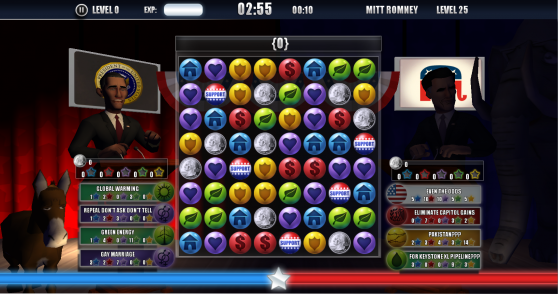 As someone whose primary source of news consumption is The Colbert Report, the idea of debating head-to-head against today’s brightest political pundits is a little intimidating.  Luckily, the articulate elite of Party Politics use Match-3 battles as their arena and experience points to determine bureaucratic aptitude.  With a little level grinding, we can all be the next President.  Yes, we can.

Thanks to the surprisingly positive critical response to 2007’s Puzzle Quest: Challenge of the Warlords, the Match-3/RPG hybrid genre has begun to take off, with variations on the theme appearing from indie devs (D&Tech7’s Jewel Fighter), heavy-hitters (PopCap/Square-Enix’s love child, Gyromancer) and everyone in between. Checkpoint Studios has now thrown their hat into this consistently growing ring with Party Politics.

The game features two ways to play.  In the single-player “Campaign Trail,” you’ll tour the country and face one famous AI opponent after another in an attempt to gain voters’ support.  The multiplayer mode allows you to quick-match friends and random Facebook players in one-off battles with your current campaign character.  In each mode, the goal is the same: complete the 3-minute, turn-based debate battle with more “support points” than your rival.

Those ever-crucial “support points” are essentially the health bar for the two debaters.  What makes Party Politics unique is that this meter is shared, and winning or losing points is a constant tug-of-war with your enemy.  In a match with 150 possible points, if you currently have 100, your opponent is sitting on 50.  If he manages an attack that steals 20 points, the split will become 80:70.

Earning those points—and thus, the victory—is as simple as matching three support tokens on the gem board.  The other gems represent different policy topics (blue for Social, purple for Rights, green for Environment, red for Economy, and yellow for Foreign Policy) that can be used as “debate fuel” for special skills, as well as coins for purchasing upgrades.  Matching four or more of any gem awards an extra turn, and your skills each require a certain amount of “debate fuel” in specific colors to be activated.

What really makes Party Politics charming and more than an election year coattails-rider is its attention to detail.  Each state in the campaign pits you against a different candidate, spokesperson, or generally famous political notable.  These characters, from Mitt Romney to Arnold Schwarzenegger, are not only astonishingly accurate in their 3D Mii-ish representations, but they’re also assigned their own specific one-off skills that have special—and often humorous—significance to them.  George W. Bush hides behind the “War on Terror” skill; Ted Nugent rocks “Kill It & Grill It” (those poor bears); and Newt Gingrich begrudgingly attacks with one of my favorites, “Alimony,” which steals 20-30 support points and also clears every coin from the board.

The skills available to your own character, while not quite as charming, are expansive and highly varied.  Each topic has its own skill tree, with about 12 abilities available in each.  I’ve been doing quite well using a multi-faceted Liberal approach in most debates, with the skills “Global Warming” (clears one column), “Keep Social Programs” (steals 10-20 support and doubles coin value for five turns), and “Free Birth Control” (clears the board entirely and awards an extra turn).  Skill points, used for learning or improving any combination of abilities, are earned upon leveling up or can be bought as IAP.

While you can’t buy skill points with your hard-earned coins, you can accumulate new duds for your avatar, different styles of podiums to speak from, colorful backdrops with defensive powers, and adorable animal friends to help influence the crowd.  Of course, the best of each of these are cash-only purchases, but the items available for coins aren’t to be trifled with.  For only 20,000 coins, “Hope the Stray Kitten” will increase your defense by 10%, while the slightly pricier “John the Gold Eagle” will give you one extra support point on every turn.  Ultimately, the purchasable items are unnecessary to beat the game, but their affordable price points are appreciated.

Beyond its admirable attention to detail and RPG-esque hooks, Party Politics is not without disappointments.  Choosing your party affiliation at the game’s start only affects which opponents you will face; the skill trees for each party, while featuring different named skills, reward the exact same abilities.  For example, the Liberal Economy skill, “Against Bush Tax Cuts,” awards red debate fuel when you match coins for five turns.  The Conservative tree equivalent, “For Bush Tax Cuts,” does the exact same thing.  This reduces replay value as the alternate party.  Additionally, increasing skills without paying real cash is a significant challenge, as leveling up only awards one point per level and even lower-tier skills can take up to seven points to max out.  Minor gameplay issues, like skills resetting before every debate, are annoying, but forgivable.

Despite its almost too-bipartisan nature and low-key attempts at taking your money, Party Politics is an honestly delightful and surprising addition to the puzzle fighting genre.  It’s worth at least one playthrough, even without a Stevicorn by your side.