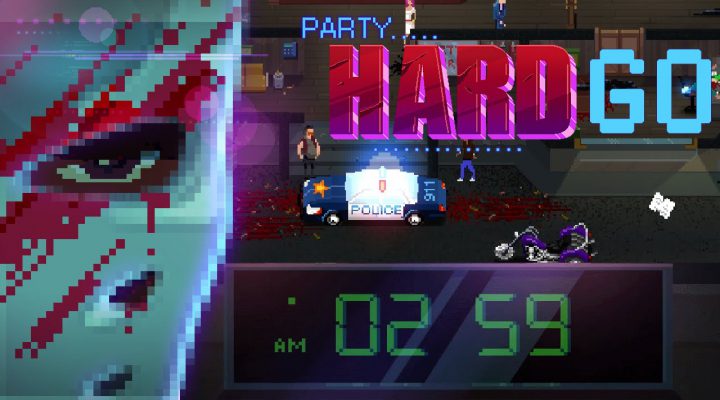 A goofy and gory sort of puzzle game

The screen never quite displays the proper amount of information

Less visually intrusive touch controls could be much better

We’ve all had to deal with noisy neighbors every now and then. Heck, I imagine plenty of us have also had to deal with a bunch of inconsiderate jerks throwing loud parties well into the early morning, to the point where we’d consider doing almost anything just to shut them up and get some sleep. Well, for better or for worse, now you can live out the fantasy of brutally murdering all those self-centered noisemakers with Party Hard. It’s therapeutic, I guess?

What begins as a few spontaneous “shut up I’m trying to sleep” stabbings soon becomes an outright killing spree, with you in control of the knife wielding maniac. A brief story segment will play after completing a stage, detailing a bit more of one detective’s desperate attempt to track the killer down (and punctuated with a twist you can see coming from the very beginning). Each level represents a new party full of victims in his cross-country murder fest, with plenty of ways to take out unsuspecting revelers as well as get yourself caught. 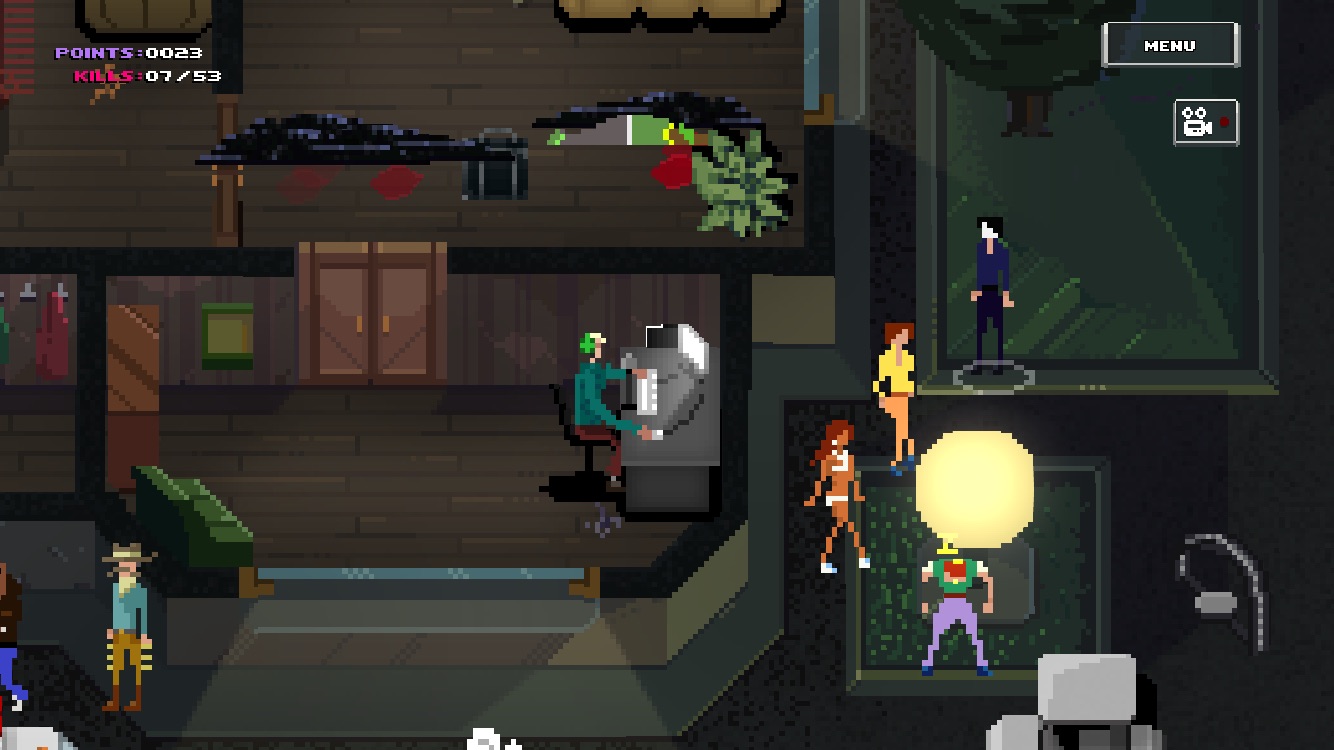 The best way I can think to describe Party Hard is sort of like a real-time version of the board game 13 Dead End Drive where you’re the killer instead of the victims. Each level is full of all sorts of potential hazards and death traps to use – from poisoned fruit punch to angry horses – as well as places to hide the bodies. Your task is to eliminate every single partygoer without getting yourself arrested or killed, which is actually a lot trickier than it sounds.

If you kill someone in sight of someone else, they’ll run off to call the police (or bring an officer over if they’re already on the scene). If someone sees a body, they’ll call the police. If they see you next to a body when they discover it, police. If you’re quick, decisive, and careful you should be able to systematically off everyone little by little without arousing suspicion (because who cares about the dozens of corpses laying around anyway, right?), but one wrong move could ruin everything. 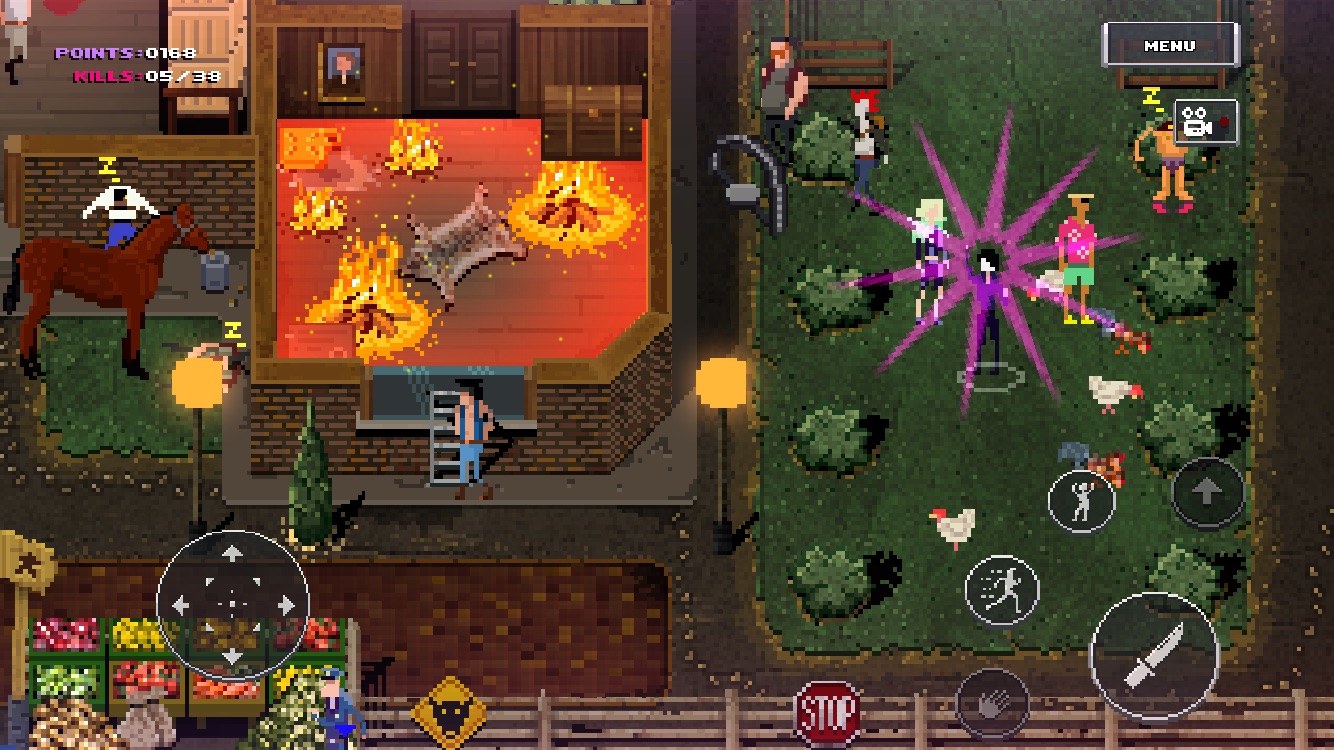 I feel like Party Hard can get away with all the blood and violence and implied sex due to its visual style. The pixel art on display here is definitely simplistic, but it can also be surprisingly expressive. Various partiers look different and dress differently, the environments all look distinct, and the gore is just detailed enough to make you go “eww” without making you nauseous. Unless you have a very active imagination.

A handful of elements might be different from one attempt to the other, which adds a little bit of replayability, but for the most part you won’t see anything terribly new if you go back to a stage you’ve already completed. A bigger issue – okay, an actual issue – is that all of the levels start to feel the same fairly quickly. Sure the backgrounds change, sometimes there are different-looking victims, and there are usually location-specific murder opportunities — but virtually every single time it’s simply a pattern of “stab, stab, wait, hide, stab, carry, dump, activate hazard, hide, stab, etc.” Later stages change things up a teeny tiny bit by adding FBI agents that will chase you down on sight, but other than that, there’s really nothing to set each of the locations apart gameplay-wise. 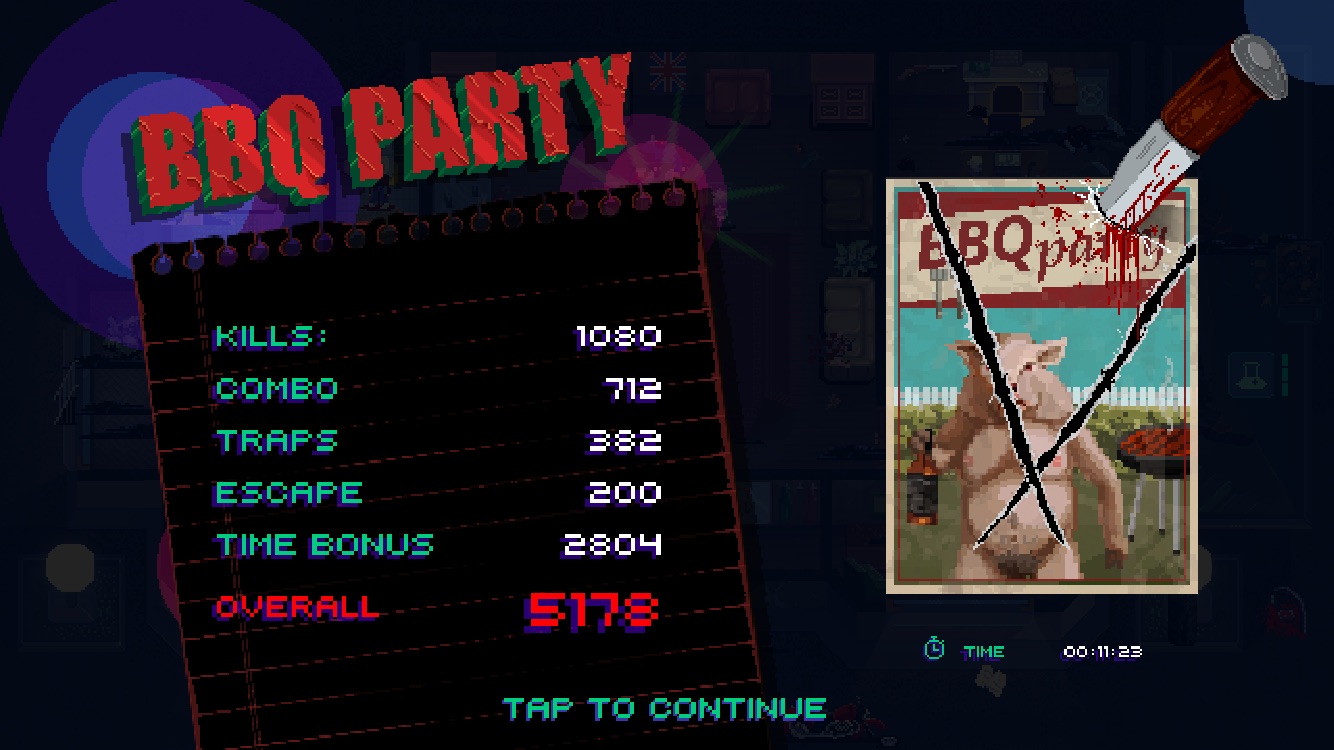 All of this is pretty much universal between the PC and mobile versions of Party Hard, but the mobile port does have a couple of its own wrinkles. One sadly expected problem is the touch controls. The virtual buttons and stick work well enough, save a few instances where I missed hitting a button by a small bit and my character ended up doing nothing, but the touch screen-centric controls aren’t that great. They’re pretty awkward to use (swipe to stab? Really?) and never feel as precise as you need with a game like this. The only positive to be said about them is that they don’t muck up the screen like the virtual controls do.

A more unexpected problem I ran into was the screen itself. It never really feels like I’m seeing enough of what’s going on. Things are either so zoomed in that I can’t see any of the important stuff happening elsewhere in the stage, or zoomed out so far I can’t make out important details like interactive objects or even see where my character is when he’s standing still. With a lot of careful screen pinching I was finally able to find a distance that worked relatively okay, but it still doesn’t beat playing on a computer screen where you can see everything and actually tell what’s going on. 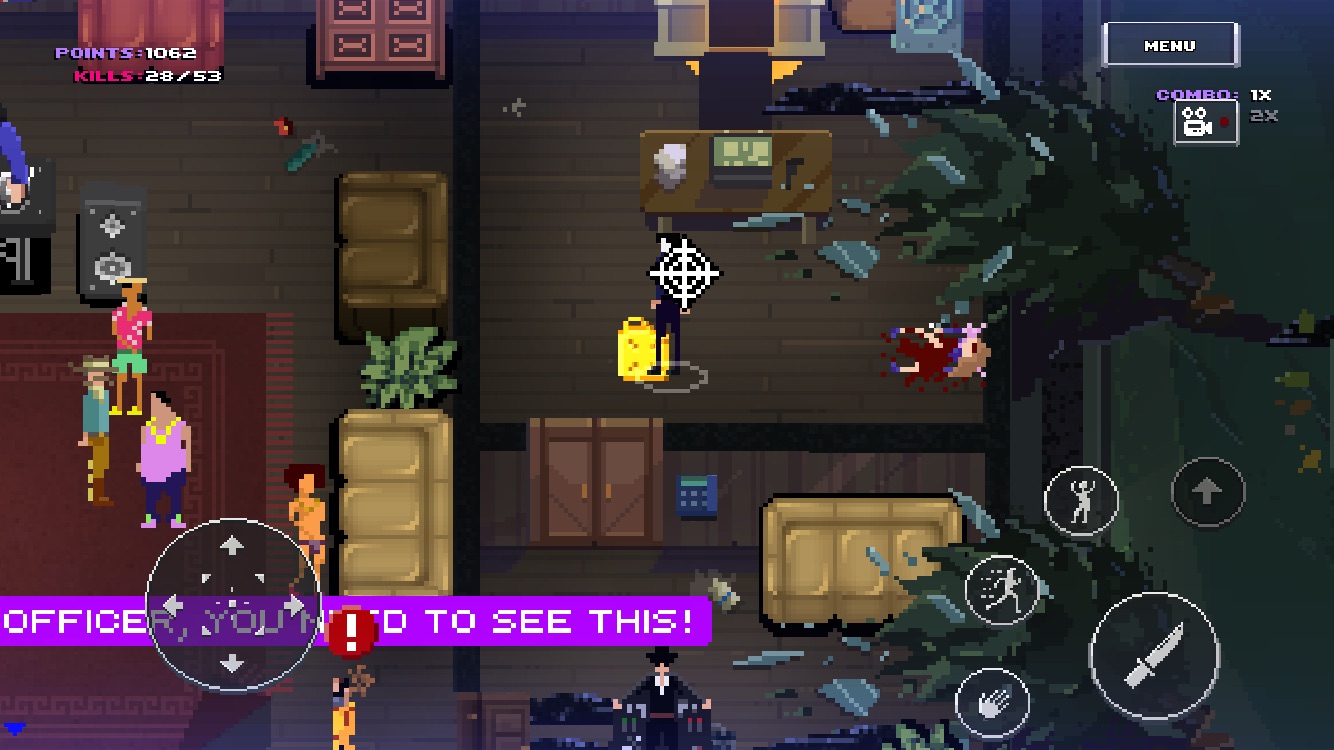 Party Hard is the sort of game that’s more fun when you play it in small doses – maybe one level at a time. The whole “wander around and murder pixel people” thing is an entertaining idea, and -almost cute in a way — but if you try to zip through it all at once, the levels will start to bleed together (no pun intended) and you’ll likely tire of it in short order.