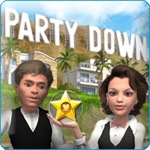 Many people who want to be stars never make it to the big screen – just ask your typical Hollywood waitress what she thinks about the topic! That’s the whole idea behind Party Down, a quirky time management game tied to a TV series of the same name that has you acting as caterer to the biggest celebrities as you dream about making your big break.

You get to play as either Shannon or Dave. Both characters have nearly identical storylines: they are tired of being featured in car or clothing commercials, and want to make it big. The trouble is, they are both having a really tough time breaking into show business. They join Party Down, a celebrity catering service, which gives them a chance to interact with real celebrities, and maybe catch their big break.

A typical example of the scenarios you’ll face in Party Down is your first job, which is to cater Angelina’s birthday party. You get to pick up Brad (literally), and drag him around the house to a place to sit, like the couch. Next, you need to serve him a plate of chicken, for which he’ll pay you $10. Next, he’ll request a drink, which you can pick up at the bar. If there are dirty dishes in front of a guest, you’ll need to clean them up before you can serve them anything further.

You’ll have to help your guests socialize, which is probably the biggest new twist. You have to match people by their interests in order to get them talking. You can see a guest’s interest by looking at the bubble over his head. There are four major conversation bubbles — sports, money, fashion, and movies.

In another interesting twist, you need to network with the celebrities in order to increase the popularity of your staff members. To do this, you need to talk to a certain number of people, shown by the number of speech bubbles at the bottom of the screen. The celebrity will generally be scary, and say things like "I can make or break you," or else accuse you of drinking on the job. It doesn’t matter what they say, as long as you chat with them!

Stars have different popularity ratings. A guest with many stars isn’t interested in talking with a less popular staff member. Your popularity increases by chatting with people who have the same or fewer stars. Once you’ve raised your popularity, you can upgrade some other ability for your staff members, like their speed in conversations or their job.

Guests will also want to dance, so you’ll have to drag them to the dance floor. This can be a bit tricky and annoying, because you have to land them in precisely the right spot or else they bounce back to where they were before.

The guest lists are familiar, with big likenesses, like Britney and Brad. The game characters look similar, but not exactly the same as their real life counterparts. Each has their own distinctive dance moves, which is kind of fun to watch.

You also need to keep your eye on the clock and tip meter. There’s a bronze, silver, and gold goal for each level, and you need at least a bronze in order to advance. You don’t actually finish a level by completing tasks. Rather, you do as much as you can until time runs out. This is alright, but it feels a bit like leaving unfinished business. Granted, once the parties get busy, it’s sometimes nice to leave before you can’t keep up. You can replay levels in order to try and get a better score.

The game is peppered with random events, which keeps you on your toes. You may be called on to break up arguments, stop a rampaging dog, or fix a power crisis by playing a mini-game. You get more tips if you complete tasks before guests lose patience. Some of this is out of your control, like if a guest wants to chat and there’s nobody to talk to. When the parties are small, you can expect to wait around a bit.

Mini-games consist of hidden object and puzzles boards, all simple and no frills, yet challenging enough to keep you busy for a couple minutes.
The artwork is distinctive, although I’m not sure cut scene artwork will appeal to everybody. Picture big heads with grayish teeth on unusually small yet voluptuous bodies (for both women and men). Still, the graphics do look nicely polished.

The strongest feature of Party Down is all of its unique twists. Networking with the stars is fun, and the socialization dynamic is interesting. Random events really keep you on your toes. The length is about standard, so you can expect at least four hours of gameplay, not counting replaying levels for a better score. The music – well, it’s upbeat and happy and simple, suitable for this type of game.

On the downside, the controls can be frustrating. Clicks must be very precise, and often I found myself having to click again and again to get it right and registered. The waiter (or waitress) moves very slowly, which isn’t very nice for the pace of the game. It’s frustrating if you have a long chain of tasks to do, and your waiter takes forever to get around to them all. You can upgrade the waiter’s speed, but it takes a long time to do it.

On the whole, Party Down is definitely something different in the time management genre. If you’re patient and don’t mind a slower pace, it has some cool twists worth checking out.

If you like this game, check out Wedding Dash, Delicious 2 Deluxe, and Burger Shop.

The Serpent of Isis Review