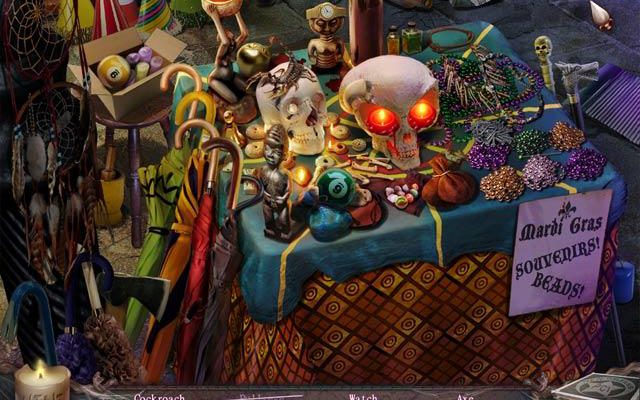 Paranormal Crime Investigation: Brotherhood of the Crescent Snake is a game in need of balance. It looks great, sounds great and serves up some of the most challenging hidden object gameplay I’ve ever run into to. But everything else about it is disappointingly half-baked, from the short, silly story to the dull minigames and even the unimpressive collector’s edition extras. The net result is a game that hints at excellence but ultimately falls short of the mark.

When a string of unexplained deaths occur in the city of New Orleans and the police can’t handle the job, they call you: the best investigator the Paranormal Crime Investigation unit has to offer. Beginning at the grisly scene of the latest murder, you’re tasked with figuring out who’s behind this rash of murders and then putting a stop to it once and for all. All in a day’s work for the sharp minds of the PCI! 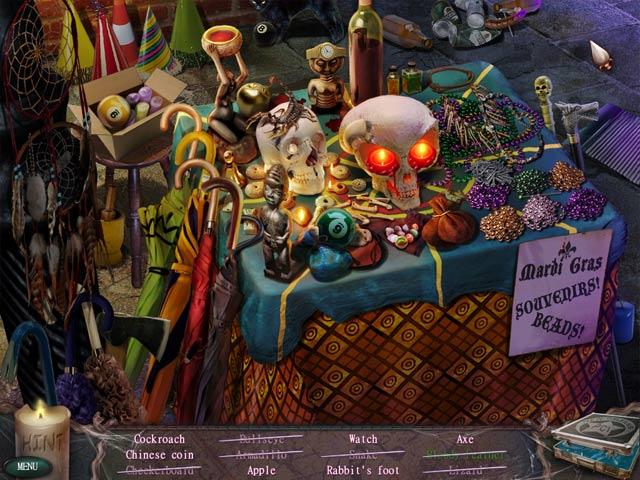 The first thing I noticed was how good the game looks. Brotherhood of the Crescent Snake is sharp, bright and colorful, and notwithstanding the comparatively mundane subject matter – New Orleans is a heck of a town but it still can’t compare to the fantastical and entirely imaginary landscapes found in some games – a real feast for the eyes. Yet it rather oddly offers no support for widescreen monitors, meaning those who have one (like me) will effectively be playing in a window in the middle of the screen, with large, black borders on all sides. It sounds great too, with some of the most listenable music ever to appear in a hidden object game, but there’s nary a peep of voice acting to be heard. (Which, in light of the quality of some voice acting efforts, isn’t necessarily a bad thing.)

Before long I ran into my first hidden object scene, and that’s when I noticed point number two: this game does not mess around. Some hidden objects are very small while others are exceptionally well-camouflaged (and some, naturally, are both), and the scenes themselves are beautifully rendered but also distractingly cluttered. I needed four hints to get through that first scene, more than I use to complete most entire games, and it served as a wake-up call that maybe my HOGging skills weren’t quite as hot as I thought.

I got better as the game progressed, but the game, unfortunately, got worse. The early parts of Brotherhood of the Crescent Snake set my expectations high but the more I played, the less impressed I was. The minigames are largely an uninspired collection, many of them just exercises in following instructions, and with the notable exception of an unusual “match three” puzzle that shows up a few times, those that do pose some degree of challenge are nothing we haven’t seen before. They also tend to repeat, as do the hidden object scenes, while the intriguing “PCI Kit” that chronicles your progress and promises to serve as a portable lab kit, unraveling the mysteries of magic with the magic of science, is of virtually no interest or consequence except as a method of doling out occasional, uninteresting “click where you’re told” activities. 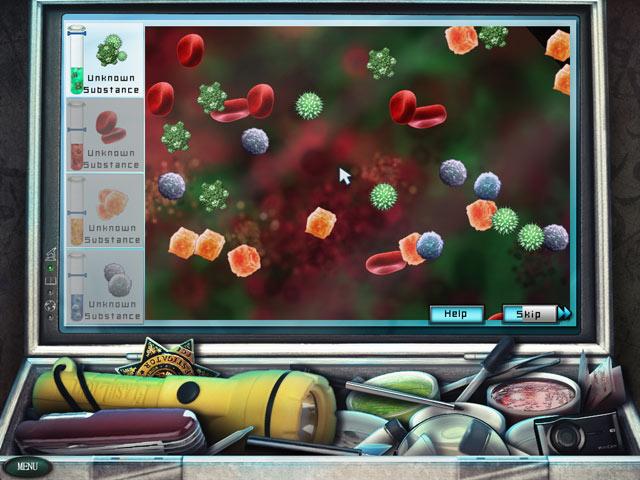 Yet in spite of all that obvious filler, the game is surprisingly short, with not much more than a couple hours of play in store plus the bonus chapter which adds another 30 to 60 minutes of incoherent storytelling. And as long as we’re on the topic, I may as well mention that the whole thing is kind of silly, too. Hidden object adventures aren’t the most riveting tales to begin with, but Brotherhood of the Crescent Snake is a real shark-jumper, with the epilogue chapter in particular feeling almost entirely random and pointless.

As you might have guessed based on the presence of a bonus chapter, this is a “Collector’s Edition,” but don’t expect to be overwhelmed by the extras. There’s a built-in walkthrough that’s accessible anytime, as well as the aforementioned extra chapter; you’ll also be given direct access to all the minigames (once the epilogue has been completed), 18 low-resolution (1024×768) wallpapers and a really good soundtrack that sadly cannot be saved for later listening. That’s it, and compared to some of the better CEs out there, it’s not much .

There are a few other rough edges, like the reversed instructions for two similar puzzles that pop up near the end of the epilogue, which isn’t overly problematic in itself but does speak to a certain lack of attention to detail. It’s also a bit iffy on keeping the action moving forward and although many games will occasionally leave you hanging with no idea of where to go or what to do next, Brotherhood of the Crescent Snake compounds the problem with a hint system that’s limited to hidden object scenes and minigames. If you’re stuck, your only recourse is to wander around until you stumble upon an object search that’s popped up somewhere.

Paranormal Crime Investigation: Brotherhood of the Crescent Snake comes off the line like a rocket but then smashes its knee into every hurdle on the track, never tripping but not able to keep up the pace, either. Its hidden object segments are gorgeous and challenging, but everything else about it falls flat. This is one game that’s definitely a try-before-you-buy.