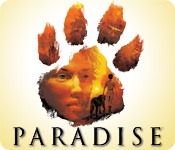 Paradise is a point-and-click adventure game for serious fans of the genre. Though the game features a delightfully mysterious story and a very atmospheric presentation, the difficulty of the puzzles could make it a little too frustrating for most. But for those who can get past Paradise‘s faults, there is a lot to like about this adventure.

Paradise tells the tale of Ann Smith: an unfortunate lady who, after being injured in a helicopter crash, is now suffering from amnesia. She awakens in a magnificent palace somewhere in Africa, and immediately sets about finding her way home. Her journey is quite large in scope, and sees Ann travelling through dusty cities, treetop villages, barren mines, and more. As the story progresses, Ann learns more and more about who she actually is, which eventually culminates in a very satisfying ending.

The game will be familiar to anyone who has played a point-and-click adventure game before: you move Ann around the environment, speaking with characters to learn clues and collecting objects to solve puzzles. Paradise extends its amnesiac theme past the story and into the actual game as well, simply dropping players into the game world and forcing them to figure things out for themselves. This means that there is no form of tutorial, so players will have to learn the ropes on their own. Thankfully things aren’t too difficult to pick up, as the animated icon helps identify who you can talk to, where you can go, and what objects you can pick up/interact with. In fact, Paradise can be played with one hand, as it only requires use of the mouse.

What is difficult though, is understanding the logic behind a large percentage of the puzzles in the game. While this genre of game is infamous for devious puzzles, Paradise takes things a step further. Though it’s normally easy enough to understand what to do, how to go about completing that task is another thing entirely. The solutions to these problems are often so convoluted that most players will probably resort to trial-and-error: randomly clicking the environment or combining objects in an attempt to stumble across the solution. These problems are made worse by the game’s controls, which don’t always work the way they should. Often times clicking an area will cause Ann to run in the complete opposite direction, while the touchy cursor doesn’t always relay the correct information.

The game also occasionally veers off into other types of gameplay, those these are largely hit and miss. The dream sequences where players take on the role of a black panther, for example, both look and control terribly, though thankfully they can be skipped all together. Meanwhile, other sections such as sand fishing help to give players a break from the constant problem solving.

But what the game loses with frustrating gameplay, it makes up for with an incredible atmosphere. From the cut scenes to the superbly detailed backgrounds, Paradise is a beautiful game to look at. Though the backdrops are, for the most part, static, subtle touches like flowing fountains or swaying trees help bring the world to life, and give players a real incentive to explore. A lot of the game’s personality comes from the attention to detail that has been put into the visuals. Small things like a newspaper with the sudoku puzzle half-completed go a long way to making the game world feel more real. The only drawback is that a lot of the different areas in the game look similar, which can make it easy to get lost.

Of course, the game’s main draw is its story. While the focus initially is on Ann and her wonky memory, it eventually shifts to an imminent war, which it turns out Ann plays a big role in. The combination of the personal story of Ann amidst all of the political drama makes for an interesting tale, and one with plenty of twists and turns that most won’t see coming. Throw in a cast of colorful characters and you have a recipe for quite a compelling mystery.

Ultimately though, the joys of Paradise will only be found by those with enough patience to brave its many faults. The frustrating puzzles and annoying controls are a tough barrier to get past, but one that’s worth it if you’re a fan of a good mystery. This is an adventure game made solely for die-hard fans of the genre, and for those people, the good will certainly outweigh the bad. But for those new to the genre, this is not a good place to start out.

For similar games, try The Color of Murder: A Carol Reed Mystery, Sinking Island, and Nostradamus: The Last Prophecy.