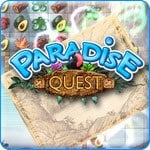 Popular as casual games have become, you can’t turn anywhere without running into a puzzler based on making horizontal or vertical rows of three or more identical objects. Likewise, there’s no shortage of head-scratchers featuring green, or eco-friendly, themes. But tempted as you may be to lump Paradise Quest into either category as just another nondescript offering given a passing glance, don’t. One of the finest examples we’ve seen of both, it’s sure to be a hit with kids, adults and carbon-conscious players of all interests and backgrounds alike.

Mind you, the storyline – told through occasional comic book-style panels, and featuring token hero Dr. Evan Finch’s hunt for mysterious artifacts and exotic animals on tropical isle Isabela – seems like something of an afterthought. Perhaps that’s why, rather than a lengthy narrative, the first sight players are greeted with is instead a stunning opening screen graced by fluttering butterflies, grazing tortoises and a drum- and tribal-chant-heavy musical score that’s tailor-made for adventure.

Like the lovingly rendered, but hauntingly desolate island that serves as a main hub for your journeys, it speaks to the game’s core strengths: Personality and atmosphere. As you’ll quickly discover, the whole package exudes a palpable sense of charisma from every pore.

Swapping two items at a time, you’ll need to create lines of three or more similar objects to make them disappear from the board, with higher-situated tiles falling down to close the gaps, and, possibly, sparking off huge combos in the process. Your main goal: Break enough stone tiles by making matches atop them to free a set number of special habitant fragments, remotely located throughout every level.

Of course, there’s always a catch – playing fields range in scope from sizable to gigantic, so much so that they don’t fit on a single screen. And while a handy mini-map provides a decent overview of general stage layout and where these fragments might lie, navigation’s solely up to you. Capable of scrolling in multiple directions, the closer to any given edge of the screen you make a specific match, the more the view shifts afterwards to travel along the same path. It’s a novel touch that adds considerable depth and strategy, in that each level’s effectively a new adventure.

Moreover, given confined pathways, limited viewing angles (a problem periodically compounded by nighttime scenarios requiring you to light torches to view nearby terrain) and limited playing pieces in range to cope with, forward progress also takes surprising skill and though.

Thankfully, there’s a brisk, yet casual feel to the experience that strikes just the right pitch and pace. What’s more, new surprises are regularly introduced, from patches of sand that hide pickaxes and rafts (necessary for bypassing walls, rivers and other obstacles) to vine bonuses (create matches to fill the meter) that let you instantly shift locations on the map.

There’s even a thrilling spate of power-ups – earthquakes that shake all of one type of tile from the screen, tornadoes that blossom and swirl, sucking nearby objects into them – and collectible resources to contend with. In the latter case, simply match appropriate icons – lumber, water drops, juicy berries, etc. – to collect these goods, which can be used to purchase environmental upgrades. The more you buy, the more lush your island becomes, and the additional animals that return to the island.

As for those collectible habitat fragments, once retrieved, simply access your journal to solve simple photo-based jigsaws and unlock new destinations for those animals to inhabit. These dazzling landmarks, capable of being visited at your leisure, play host to all sorts of animated critters that swim, flutter or fly by. Using your mouse, it’s possible during stopovers to snap collectible photos of these fascinating specimens (white-cheeked pintails, marine iguanas, Galapagos clingfish, etc.). All of which adds up, of course, to a surprisingly rich and varied epic that’s bolstered by a first-rate presentation, from its brilliantly colorful aesthetic to a slick library of sound effects.

Infinitely greater than the sum of its parts, we’ll nonetheless be honest: Paradise Quest can get repetitious, and won’t truly wow so much as surprise and delight. But it’s obvious that creator I-Play rolled out the red carpet for this production, and it shows, with desktop veterans, wide-eyed newcomers and Mother Nature lovers of all ages the clear beneficiaries. All due respect given…