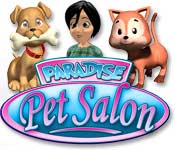 There’s nothing that devoted pet lovers won’t do for their furry friends, including pampering them with a day at the spa – something many humans can’t even afford to do for themselves. It’s all in a day’s work in Paradise Pet Salon.

Paradise Pet Salon is the latest time management sim in the style of Sally’s Salon or Belle’s Beauty Boutique, but instead of plucking eyebrows, manicuring nails and dying peoples’ hair pink, you’re giving kitties and puppies baths, cutting and grooming their fur, giving them their vaccines and helping them to relax after a stressful day of lying on the couch chewing slippers.

The story is actually pretty interesting. Pet Corp, the big bad corporation of the game, owns a chain of pet salons in town. You begin as an employee at one of the shops, but are promptly fired after the first day (for being too efficient), so you have no choice but to open up your own salon and go into competition with Pet Corp.

You’ll start with a basic salon where you’re responsible for purchasing work stations and furniture and upgrading the interior design and flooring to patterns of your choice. You can place the workstations and chairs yourself, which means you get a great deal of control the appearance and layout of the salon.

During a typical day, customers will arrive with pets that sport little icons over their heads to indicate which services they want. Some pets might just need a quick bath or hair grooming, while some might require multiple services like bath, cut, vaccinations and brushing. You click on a pet to walk it over to the table to begin the service, and when finished, walk it back to the owner to collect payment. You can lead a pet in each hand and right-click to switch the pets around – you’ll always place the left pet first.

Sometimes random events will cause more pets to want a particular service. For example, one day there might be a flu going around so a lot of pets will need vaccinations, or there might be a pet show going on so pets will need to be groomed. Both the pets and owners will start to get impatient if they’re kept waiting too long, and will start to lose hearts. If they lose all of them they’ll storm out in a huff.

At the end of the day, the total amount of cash you earned will be tallied up. Paradise Pet Salon is unique from other management sims in that you don’t have to meet minimum cash goals every day to move on to the next level. Instead, the goal is to earn enough total cash over many days to be able to buy out the next Pet Corp-owned salon, thus expanding your own salon empire while gradually chipping away at Pet Corp.’s monopoly.

This means you’ll have to balance saving cash with spending enough to improve your business and attract more customers. If Pet Corp. starts offering vaccination services, for example, then you’d better add a vaccination workstation to your shop as well because customers will now demand it. You can also upgrade your workstations to run more efficiently, buy water and food dishes to soothe impatient pets, buy chairs to keep owners patient for longer, and hire an assistant to help you in the salon by automatically take the pets to their owners.

It’s great that Paradise Pet Salon is trying new things, but the game has its share of issues as well. The services – especially the spa treatment – take a long time to complete, and you don’t even get to see the pets receiving their treatments. All you get graphically is a white ball moving around and a paw going from empty to full to indicate how much longer there is until the treatment is finished. How cute would it have been to see a cat wriggling around in the bathwater, or a poodle being transformed from puffball to an elegant show-stopper at the grooming station? Watching a paw fill up is simply tedious.

The water and food dishes are also awkward in that you have to lead the pets over to them in order to have a heart restored. It would have been easier (and less disruptive to the overall flow) to be able to bring a cookie or treat to the pet at whatever station it was at.

The freedom to customize your salon the way you want it and to juggle upgrades and purchases across multiple stores (instead of a purely linear level progression) is probably Paradise Pet Salon‘s greatest strength, and will prove a rewarding challenge for those who, for example, enjoy playing Monopoly. But Paradise Pet Salon could also have benefited from more polish and better exploitation of its cute pet subjects.