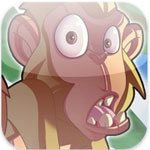 Perhaps naively, I always thought that monkeys were just monkeys. Apparently, I was wrong. Like the bizarre love child of King Kong and The Count from Sesame Street, there's a new “Dracula Monkey” on the beat, and he's dead set on starving the rest of the monkey population of their beloved bananas. In one of the most outlandish plots you'll ever see, Paradise Monkeys charges you with getting these bananas back, all by tapping each monkey on the head in quick time.

It's a set-up that owes much to your local arcade, the main bulk of play mirroring a whack-a-mole cabinet. With a set number of monkeys to tap in each stage, your job is simply to prod them on their head when they pop up from below, a quick couple of taps usually enough to win them over.

It's a simple enough structure, you might think, but with three rows of three monkeys each popping up and down at quick pace, managing to hold on as the level slowly passes by is easier said than done.

There are rewards, however, to keep you progressing, coins won in the levels by picking off certain monkeys with aplomb enabling you to pick up treats in the game's shop that can boost your health, or add power to your touch so each monkey requires less prodding.

Also unlockable are a couple of bonus stages that deviate from the standard play mode, but still remain focused on testing your reaction times – the first a question of popping balloons, the second a monkey-fied take on the rhythm-action games flooding iPhone, banana's flowing down the screen, the idea being to touch them in time when they hit the bottom.

But whether or not you'll earn the credit needed to unlock such gems is the main issue. Paradise Monkeys is a multi-touch title, meaning success stems from your ability to use more than one finger to pick off the numerous monkeys at the same time, rather than one by one. While it's possible to get through the very first encounter with just one finger in play, anyone attempting such a method from that point onwards won't last much longer than a few seconds.

Even then, the reactions needed to make it through some of the levels – bonus sweeteners aside – are almost superhuman at times. With very little in the way of instructions (indeed, Paradise Monkeys is sorely missing a tutorial mode) and levels often over before you've even had a chance to spot that things are going awry, anyone who isn't up to the challenge from the word go is going to feel rather short changed.

With a gentler lead in, Paradise Monkeys could have been instantaneous hit, the charm and character of the illustrations giving proceedings a real sense of warmth. But as things stand, play is totally unforgiving and ultimately frustrating for those who aren't on board from the start. Though simple to understand when you're in the groove, Vetasoft has produced the kind of title that needs a clearer set of instructions, less time spent on setting up its superfluous plot and more on communicating just what's required. Sadly, though clearly a game made with much love, Paradise Monkeys is a touch or two away from being a real monkey masterpiece.