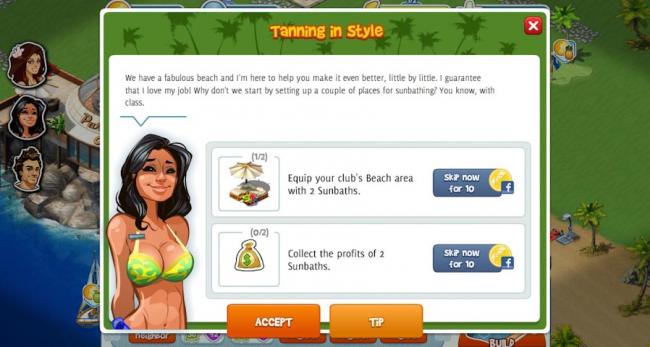 Ain’t the Internet great? Here I am sitting in a chilly Chicago apartment during the last days of March, and I can now say I spent Spring Break running a trendy beach resort thanks to iZ’s Paradise Club. Sure, my buddies in Florida may come back with genuine tans, but I significantly increased the club’s income and helped save a newlywed couple’s honeymoon. Alas, I just couldn’t stand the working conditions. Not only was news of almost major action working its way onto my Facebook wall, but I also found myself being charge when I couldn’t find a helping hand.

It’s a shame, because I hear a lot of drama goes on at Paradise Club. The developers trumpet the game with the lofty label of “innovative” and even go so far as to call it “the first interactive series ever on Facebook.” That’s a bold boast, and one that games such as Ravenwood Fair may have a better claim to, however elementary the implementation. To iZ, this means using an extensive script and encouraging decisions that could affect the lives of more than 20 characters who come to visit. As the game progresses, you’ll learn a little more about each visitor and watch as a complete story weaves around them all as you level and expand your club.

It’s a nice idea, but iZ takes a little too long to get to introduce this “innovative” feature. Until at least level 5, Paradise Club plays like almost any other property management game, which means that jaded veterans and newcomers alike want to might skip town before the real action begins. You build a few lifeguard stands by the beach, you plant some palm trees at the recommendation of the new guy, and you collect the profits. Palm trees help with the yields from nearby attractions, and you can attract new members to fill your stands by starting an in-game marketing program of sorts. It’s all well done, but it’s business as usual.

Variety arrives when newlyweds Joe and Jasmine pop on the screen, and it’s not long before Joe’s eyes linger on the club’s shapely women. Jasmine of course gets jealous, so you help Joe patch things up with a picnic and a “relax area” for the young couple. That’s cute and all, but the trouble begins when you need to find a pair of sunglasses that will supposedly help Joe keep his eyes to himself. Never mind that sunglasses would actually help Joe with his clandestine ogling, but you also can’t give them to him unless you get them from a friend or fork out a dollar’s worth of Facebook credits to get them. There’s apparently a chance to get an item like this just by clicking on a friend’s lifeguard tower, but for the most part, you’ll want to bring friends or cash. 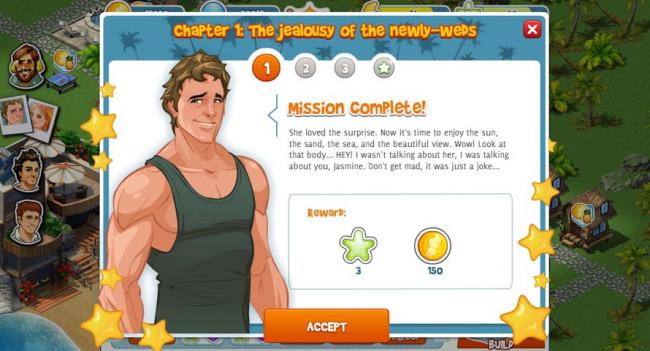 Even worse, Paradise Club is one of those games that posts announcements to your Facebook wall automatically, often without giving you a choice in the matter. There’s an option to disable it when you first install the game, but most players might skim over it (as I did) since it resembles the normal warning that pops up whenever you install a game on Facebook. I’m okay with an occasional wall post, but games like this should ask your permission every time there’s even a possibility of announcing achievements to your followers. 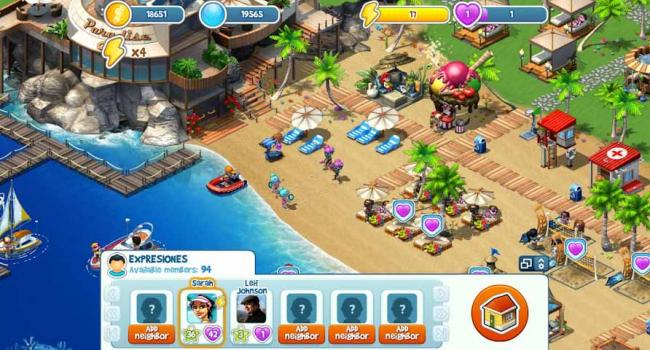 Still, Paradise Club provides a decent vacation package from other social games if you have a few friends willing to play with you, and its narrative elements add a nice bit of spice to an increasingly dated formula. Their level of innovation might be questionable since the story sections look like any other mission, but you’ll find some small pleasures in having an actual narrative use for some of the structures you build and collect money from. Think of it as the Star Wars: The Old Republic of social management games. The story elements enhance a familiar formula, but Paradise Club’s future success may require frequent updates to maintain the lure of those enhancements. Let’s hope iZ does better than BioWare has done so far.