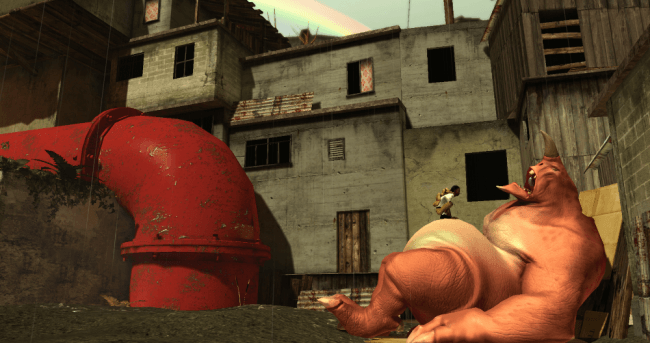 Papo & Yo is beautiful, heartbreaking, moving, upsetting, powerful, and plenty of other conflicting emotions all rolled into one. It’s a magical experience that captivates throughout, with puzzles that will have you genuinely smiling along, to scenes that will stir up something inside you that video games don’t often touch.

It’s a very personal story laid bare, and you’ll want to gobble every inch of it up. Even some sketchy platforming action and relatively easy conundrums can’t bring the overall message down too much.

You play Quico, a young boy who journeys into a dream world to escape from a monster in his real life. The monster also exists in this alternate world too, but in a different form – and with the help of a couple of friends, Quico must find a way to cure the monster of its anger issues.

If you haven’t guessed, each of Quico’s characters in Papo & Yo isn’t what they appear to be. The story is inspired by the rough childhood of the game’s creative director, and without spoiling the crux of the experience for you, there’s an underlying juxtaposition that drives Quico’s quest. Put it this way – the monster is not a literal beast, but is hugely scary to Quico all the same.

It’s this storyline that props the game up on its hind legs, willing you onwards through its various 3D platforming puzzles. Apart from the lovely story-based imagery, there’s also plenty to smile about in terms of the actual gameplay. Many of the earliest puzzles in particular focus on moving houses around to create pathways, whether that’s picking them up and placing them, or watching them scuttle around like insects.

The majority of the conundrums are focused around the monster, and his addiction to fruit and poisonous frogs – again, imagery to reflect a real-life situation – and these work really well to give the game a sense of urgency and danger, as the monster chases after you in a flurry of anger.

It’s difficult to portray just how beautiful the message of the experience is, and how heart-broken the finale will leave you. This is very much a tale that will stay with you for days and weeks after the conclusion, and a rare occurrence of a video game story being the main spectacle in the overall experience.

That’s not to say that the puzzles aren’t notable – as mentioned, there’s some really clever stuff in here – but a lot of the time there’s not a great deal of difficulty to proceedings, and you’ll breeze through with relative ease. It’s all very straightforward, and even if you do get stuck, help boxes pretty much spell out each solution to you.

The puzzles can also be a bit long-winded at times, especially towards the end of the game. You’ll work out exactly how to tackle a problem, and then spend the next five minutes doing the obvious and thinking to yourself “Yes yes, just let me get on with the story now.” 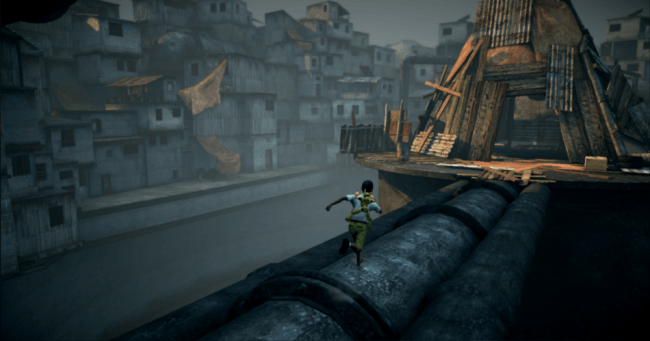 The platforming sections aren’t so hot either. The jumping in particular isn’t tight enough, and at numerous points I found myself frustrated at falling off walkways and having to scale all the way back up again.

Regardless, Papo & Yo is an essential video game experience, especially if you’re after some meaningful storytelling in your game library. You’ll smile, you’ll feel sadness in the pit of your stomach, and you’ll most definitely recommend it to others once you’re done.

Fish Out Of Water Review