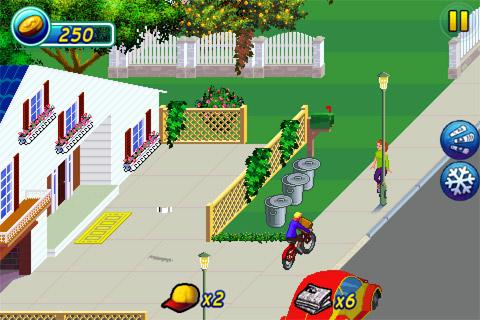 Paperboy: Special Delivery adds a story to the arcade classic, but all that’s headline-worthy are the sloppy controls.

Paperboy refuses to die, and perhaps we should all be thankful. Born to glorious beginnings as an arcade game controlled with real handlebars in 1984, the game has since witnessed such an incredible number of reincarnations across different platforms that Hindus should embrace it as representative of the concept. After briefly appearing in a failed iPhone outing earlier this year on account of licensing concerns, the world’s favorite window-smashing delivery boy has returned in Glu Games’ Paperboy: Special Delivery, with story-based gameplay and visuals that largely remain faithful to the original. Sadly, however, unresponsive controls and slightly high price make this a game to avoid.

For the uninitiated, Paperboy is the story of a lone paperboy who quests through the treacherous jungle of suburbia, armed with only a stack of papers against fearsome subdivision horrors that lurk behind every station wagon. (Remember, this is 1978, according to the headlines in the game.) To succeed, he must deliver his papers to subscribers by tossing them on doorsteps or paper boxes, all the while avoiding the basketball players, boom-box junkies, and jazzercisers that unintentionally impede his path. And, of course, there are larger obstacles as well, such as cars and manholes. Since non-subscribers must of course be punished, the paperboy can destroy their homes and cars by throwing papers through their windows or hitting them as they walk outside. Think of it as a forceful trial package.

This is quite harder than it sounds, especially for the obstacle-crammed hard mode, and consequently all Paperboy revivals must be judged on the quality of their controls since the game requires so many changes to speed and movement while tossing papers. Sadly, this is where Paperboy: Special Delivery stumbles terribly, although it’s not for a lack of trying as players can control their paperboy in one of three ways. If you’re seeking a sense of the original arcade game you’ll likely go for the joystick mode, but you’ll quickly tire of the choppy controls and poor accuracy. Instead, the best setting to use is the game’s tilt mode, which allows you to operate the movement of the bike solely by moving the iPhone and tapping the screen to toss your paper. While even this option is a tad choppy, the tilt controls capture something of the feel of steering your bicycle through the chaos in a way that hasn’t really been captured since the original handlebar controls. Button mode offers on-screen buttons for moving left and right, although these tend to be maddeningly unresponsive and should be avoided.

The good news is that Glu wisely avoided any significant visual changes to the original game unlike February’s outing by Vivid Games, opting only for a cartoony art style that harks back to the game’s original promotional art. The most significant change is a 20-level story mode that features the paperboy’s attempt to save up for a game console and his brushes with love as he flings roses instead of papers, complete with useful unlockable abilities. For variety you’ll also find levels that require you to go on a destructive rampage and levels that require you to beat the level within a time limit. Finally, nostalgia buffs seeking arcade gameplay can jump into Classic mode, which is basically a “quick play” mode without the trappings of the story setting.

It’s all good fun, but some players might want to dodge the $4.99 price tag that Glu has tossed out. Whatever its strengths and additions, Special Delivery is still just simple Paperboy at heart, and the cumbersome controls and a lack of peripheral goodies such as achievements keep Paperboy: Special Delivery from delivering an experience that justifies the price.