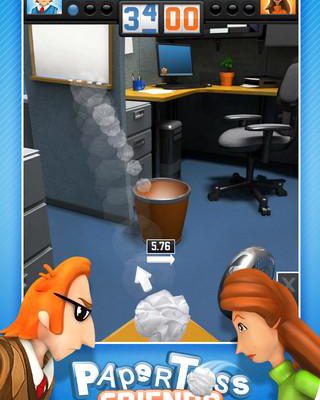 If you’ve grown weary of tossing paper all by your lonesome, Paper Toss Friends will help you feel the love.

The first Paper Toss game was released in 2009, around the time the US economy started to smell like a carton of milk parked behind a furnace. The game simply involved pitching wads of paper into a wastebasket, but the quiet ring of phones and muted chatter of your digital co-workers in the background turned Paper Toss into a means of relieving work stress during a time when sneezing wrong could get you kicked out of your real-world job. The economy has since improved a little bit, but there are still reasons to lose yourself in slacker fantasies. Paper Toss Friends isn’t very different from its predecessors, but it doesn’t have to be. We’ll never lose our inborn love for pitching trash with style.

Paper Toss Friends plays very similarly to Paper Toss 2.0, which improved on the original game by adding new environments, new bonuses, and new objects to huck at the wastebasket. In fact, there are very few aesthetic differences between 2.0 and Friends. The main difference is that Paper Toss Friends is meant to be experienced with pals. You can recruit your friends over Facebook or GameCenter, or you can match yourself up with a random opponent and take turns. Either way, your goal is to beat your buddy’s score.

Another difference between Paper Toss 2.0 and Paper Toss Friends is the latter’s way of drawing up the conditions for each match. When you prepare a challenge, a roulette lets you pick one of three randomly-selected projectiles (you’re looking at anything from a paper wad to a hand grenade), plus one of three playing fields. All the fields from Paper Toss 2.0 are on-hand, including the office of your snoring boss and the poor intern that scuttles back and forth in his office chair to create a moving target.

The challenges vary, too. You can play until one side screws up, or you can each attempt to get 50 projectiles in the bin, and so on. As usual, an office fan blows from the sidelines, which makes it vital for you to calculate each shot for wind resistance before you take it. 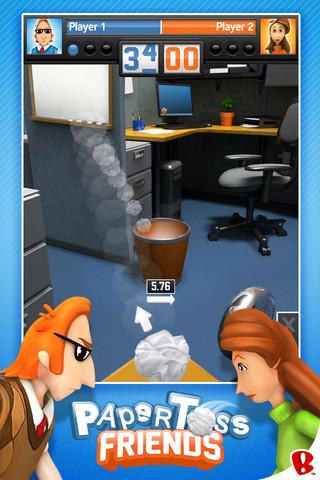 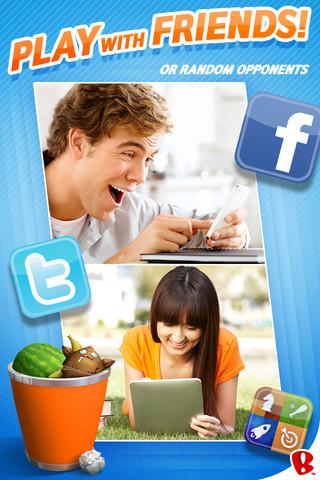 Paper Toss Friends is stupidly addictive, which shouldn’t come as a surprise. The Paper Toss games all still enjoy a lot of success on the App Store because they’re free, they’re easy to play, and they carry a surprising amount of charm. Plus you can whip objects at your co-workers’ heads, which is no more than what the sunglasses-wearing Corey Hart wannabe sharing your cubicle deserves.

It would still be nice to see more out of this installment of the Paper Toss franchise, like new environments and a wider range of projectiles. At the very least, it’s time for Backflip to edit their games for realism since no wad of paper born on Earth should go “CLUNK” as it hits the basket.

Honestly, Paper Toss Friends would have worked as an update to Paper Toss 2.0—but since the game is free, there’s no real point in complaining. Better to enjoy the game and save your rage for that jerk-face co-worker that keeps stealing your egg salad sandwiches from the office fridge.