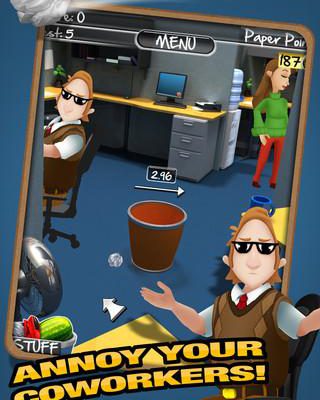 One of the top developers of free-to-play iOS games, Backflip Studios, has graced the masses with yet another bane on productivity, Paper Toss 2.0. Successor to the absurdly popular Paper Toss, the new iteration contains all the mechanics of the original and couples them with several new game modes, items, and a few extras. As enjoyable as the first, the complaints to be had are minimal at worst.

Like the first Paper Toss, Paper Toss 2.0 tasks users with seeking high scores by flicking wads of crumpled up paper into a virtual trash bin. To series newcomers, it all works very intuitively, with users simply touching the paper and sliding their finger in the direction they want it to go. For each wad that lands in the trash bin, points and coins are earned.

It’s not all as simple as it sounds, though, as a fan will periodically change sides and “wind” strength, causing the paper ball to curve in a particular direction. As such, players will have to compensate for air speed, but after some practice it isn’t that bad. For veterans of the series, it won’t be difficult at all. That said, Backflip Studios has added in some new game modes to change things up a bit.

The most basic of these modes is the “Cubicle” where the trash bin is placed relatively close to the player. Fairly low scoring, most of the amusement comes from harassing digital coworkers by flicking items directly at them. It’s not too extravagant with just a wad of paper — other than some dirty looks — but as players score more baskets, they earn more and more Coin that can be used to buy new tossable items such as staplers, tomatoes, and even grenades (also, sequential baskets create a score multiplier that not only boosts one’s score, but how much coin per shot they make too). As one would expect, the results are… interesting.

Unfortunately, and as one of the downsides of Paper Toss 2.0, currency is earned incredibly slowly, and it will take a significant amount of time to earn enough to unlock new items unless one opts for spending real money on virtual currency packs. If players don’t wish to break open their wallets, the only way to expedite this process is through playing the harder game modes. 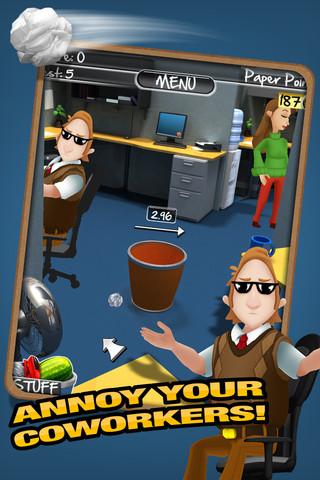 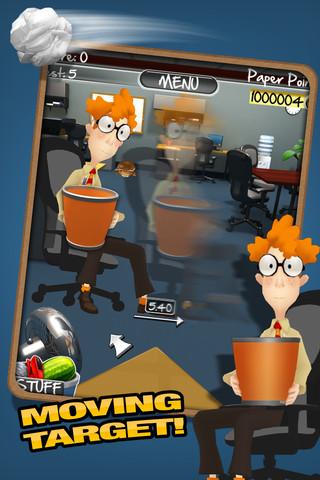 Baskets in these modes award more currency, but they are much more difficult to make. One of the hardest is a new “Intern” mode that has some kid wheeling about in a chair back and forth. To add to the challenge, the fan continues to blow making it exceedingly challenging to make baskets. It’s a great addition, but it does come with an obnoxious little oversight. The paper wads don’t reset until the last one stops moving, and a missed shot often results in it getting hung up on the wheels of the intern’s chair. This causes the respawn of a new piece of paper to take longer than it should.

The other game modes aren’t as interesting and consist mostly of trash bins being placed at farther and farther distances within different environments. They still grant more coin than the standard Cubicle mode, so they are certainly worth playing. It is also worth mentioning that that extra coin can be used on more than just amusing items, but also score boosting power-ups as well such as a creating a bigger waste basket or turning off the fan for the next turn.

Overall, the core of Paper Toss 2.0 is the same as it ever was. That said, it was always pretty enjoyable, so that’s probably a good thing. Along with the classic mechanics that made the first game popular, the new rendition comes with several new modes to offer both veterans and newcomers greater variety and challenge. More polished and expansive than the original, Paper Toss 2.0 is a great new free game for wasting time and procrastinating real work.