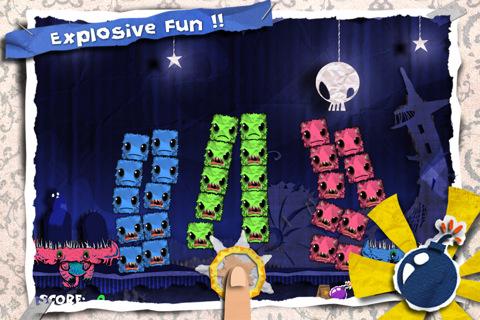 Paper Munchers: An explosive good time from the makers of Burn the Rope

Once upon a time, there were a bunch of little paper monsters who sat around a lot. They didn’t move, they didn’t do anything productive, and they generally just got in the way. And then, one day, the Paper Munchers showed up with their huge mouths and razor teeth.

“Feed us!” they cried. “Feed us the tiny paper monsters of your world!”

“These paper monsters?” we asked. “The ones who keep tripping us up everywhere and don’t seem to have any purpose?”

“Yes!” said the Paper Munchers (who were totally drooling by now).

Paper Munchers is a new casual puzzle game on the iPhone that’s a lot of fun to play. The objective is pretty simple: players have to get smaller monsters into the mouths of much larger, toothier beasts (the titular Paper Munchers). In order to do this, players have to tap the screen, which triggers a bomb blast; the explosion knocks the small paper monsters around the screen and (hopefully) into the mouths of the Munchers. Blasts can be used whenever, including when the creatures are flying through the air (thereby changing their trajectory on the fly).

The Munchers themselves have colors that correspond to the smaller creatures they’re eating. Once per tap, if a Muncher eats one of the little guys with the same color, players are rewarded with a bonus bomb. This is incredibly helpful, since Paper Munchers only starts each level with three permanent bombs. 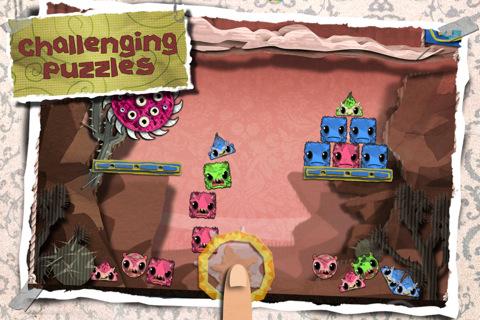 There are two types of bombs: permanent and temporary. The former regenerate with every level, but they’re in short supply. Players can purchase temporary bombs -which don’t regenerate between levels- via in-game credits. Credits are earned every time a level is beaten, but players can also purchase them for real money via an in-game store. However, it should be noted that beating levels using the permanent bombs is actually quite feasible, this is just a much more challenging task.

The production values are really nice in Paper Munchers, too. Visually, the style is playful and goofy, with some rather nice backgrounds thrown in to spice things up. Audio-wise, the game’s a riot, thanks to the sound effects that are made when the Munchers chow down. Now, that said, there seems to be an in-game glitch where the sound will cut out in levels themselves (the music in the menus plays without a problem, though). However, shutting down and restarting the game will fix this issue.

Paper Munchers is a fun, goofy little puzzler that succeeds really nicely. Even the in-app purchases are easy to ignore if a player doesn’t want to utilize them. It’s a great game that casual puzzle fans will undoubtedly enjoy the heck out of.