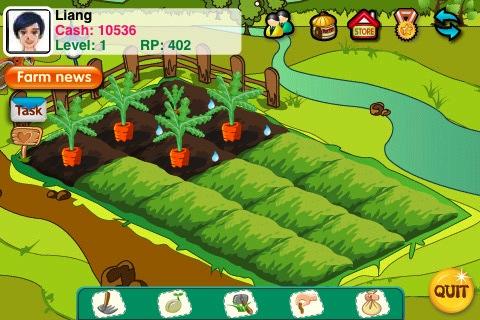 Papaya Farm is social farming at its simplest

Ever since the explosive popularity of FarmVille took the gaming world by storm, farming has become a near ubiquitous feature in social games. Most titles try to expand on the basic premise of planting and harvesting crops, like in FrontierVille, or simply feature farming as one small subset of a much larger game, like in Zombie Lane. But Papaya Farm doesn’t do that. It’s about the most scaled back farming experience you’re bound to find.

As with most farming games, you start out with a small plot of land. In this case you have just four patches of dirt where you can grow crops. There’s a store where you can buy seeds, and each type of crop has a certain amount of time that it takes to fully mature. Once you harvest the crop, you can sell it for cash, which can then be used to purchase more seeds. Rinse and repeat.

There really is no variation on the gameplay. Occasionally you’ll have to clear away a weed or a bug, and there’s also a ranch where you can take care of animals, but it works in almost precisely the same way. Animals produce goods after a certain amount of time, such as a hen that lays eggs, and you can harvest and sell those goods to buy more animals or seeds. The only difference is that you also need to replenish the food and water supplies to keep your animals alive and healthy.

Now this probably sounds a lot like most other farming games, but Papaya Farm is missing the key ingredient that makes titles like FarmVille so compelling: customization. You’ll be able to open up new plots of land to grow additional crops, but your farm never really expands much and you can’t buy buildings or decorations to spruce things up. It’s very unsatisfying to play for days only to have your farm show little to no improvement. There’s some basic social gameplay, where friends can steal crops from one another, but it isn’t enough to make the game actually interesting. 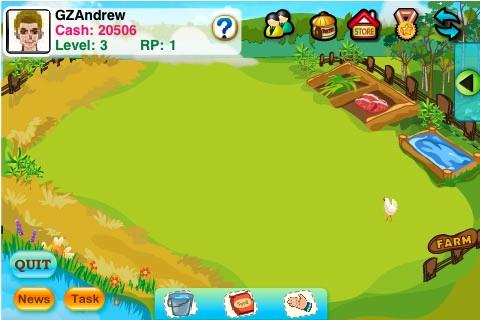 The simplicity of Papaya Farm extends to the presentation, which features drab and lifeless visuals coupled with cumbersome and unintuitive menus. There’s very little animation in the game, as you’ll spend most of your time simply staring at an unmoving farm, but the few bits that do animate look terrible. Watching animals run around your ranch is almost painful.

Papaya Farm feels like a backwards step for farming games. There’s simply so little to do that play sessions can easily last less than a minute. You pop in, harvest some crops, plant some seeds, and then leave. You don’t get the sense of accomplishment you do in other, similar games, which provides much less incentive to keep coming back, even for only a minute or two.