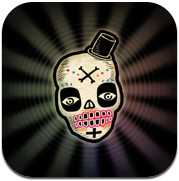 Papa Sangre is an audio only game that’s downright terrifying

Sound is often overlooked in games. We talk about how great a game looks, or how well it controls, but rarely how the sound makes us feel. But Papa Sangre doesn’t let you ignore the way it sounds. Instead, it’s a game that’s focused entirely on audio, forcing you to use your ears to traverse dark and treacherous terrain. And even though you can’t see anything, or maybe because of it, Papa Sangre is terrifying.

You’re immediately dropped into the land of the dead, a world shrouded in darkness. You literally can’t see a thing. A disembodied voice guides you along as you make your way through the landscape rescuing lost souls. But you’re not alone. There are creatures just waiting to tear you to bits should you accidentally stumble across them. And if they hear you? You better run.

You’ll use your ears to figure out where to go, but the game is controlled via the touch screen. You tap on the bottom of the screen with your thumbs to simulate footsteps. Tap slowly and you’ll walk, tap quickly and you’ll run, mess up the rhythm and you’ll stumble. The top of the screen, meanwhile, consists of a wheel that controls the direction in which you walk. Each area in the game, of which there are 25, is home to musical notes for you to follow. These notes will chime and by listening to the direction of the sound, you’ll be able to collect them.

There are plenty of monsters in your way, and each behaves differently. Some are asleep and will only awake if you make noise, while others patrol, forcing you to work your way around them. You’ll also have to deal with the terrain. You’ll run into quicksand that forces you to walk slowly, water that helps hide you from terrifying birds, and more. Some surfaces make noise, while others are quiet. What’s amazing is that all of this information is conveyed solely through sound. You know you’re in water when you hear your legs splashing around just like you know you’re close to an enemy when its growling becomes disturbingly loud.

The emphasis on sound makes Papa Sangre a true horror experience. The sounds of slashing knives, cracking bones, squishing guts, growling creatures, and hideous laughter will definitely get your heart racing. You’ll find yourself stumbling when a creature finds you, falling when you should be running. And when you do get caught, the screams and slashes are the stuff of nightmares.

Papa Sangre is a completely unique experience. It’s tense and horrifying and never lets you relax. By focusing on one aspect of the game so thoroughly, the developers have managed to create something that does one thing really, really well. Since you can’t see what’s stalking you your imagination runs wild. And that’s a scary thought.

Just make sure to play with the lights on.