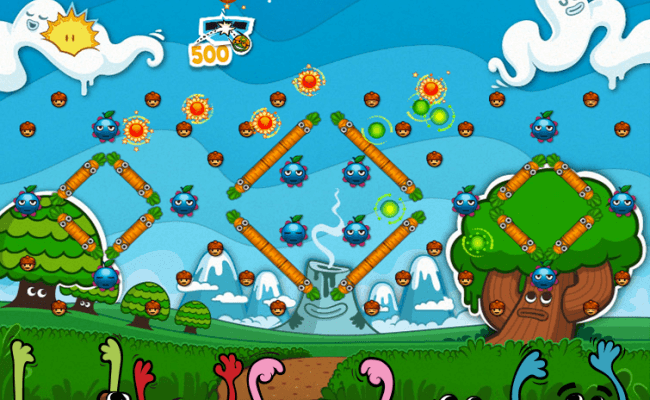 Papa Pear isn’t nearly as cute as Bjorn the Unicorn, but Papa Pear Saga is still a very decent take on Peggle.

You should not throw food. However, food is allowed to throw itself, should the need arise. In Papa Pear Saga for Facebook, an anthromorphic pear wearing a crash helmet and goggles flings himself around a Peggle–inspired game board in the nameof fun. “Fun” is as good a reason as any for a piece of fruit to whip itself through minefields of pegs and power-ups. 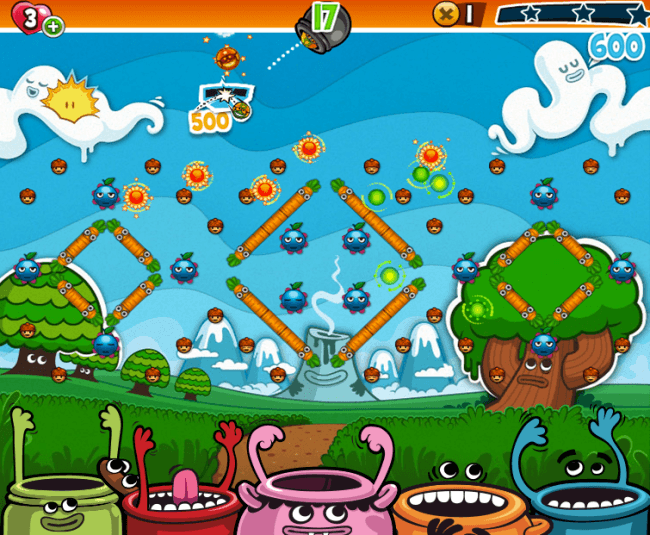 Like Peggle before it, Papa Pear Saga  is heavily inspired by Pachinko. Papa Pear acts as the game’s ball. You adjust your shot with the game’s mouse, and click to let fly. Papa bounces from peg to peg, all of which are designed to look like different kinds of fruits and nuts. But whereas you’re instructed to clear a certain number of orange pegs in Peggle, Papa Pear Saga has numerous objectives.

Most of the time, you’re asked to land at least one Papa Pear in each of the five pots lining the bottom of the game board. But there are also instances wherein you’re instructed to knock giant pieces of fruit down into any of the pots. You may also be asked to clear away a certain kind of peg, not unlike traditional Peggle.

These seemingly basic goals get more complicated as the game goes on, too. In later levels, open pots are blocked off by destructible barriers, and/or lids that must be blasted away before Papa can land in one. It doesn’t take long for you to start worrying about your ball count. 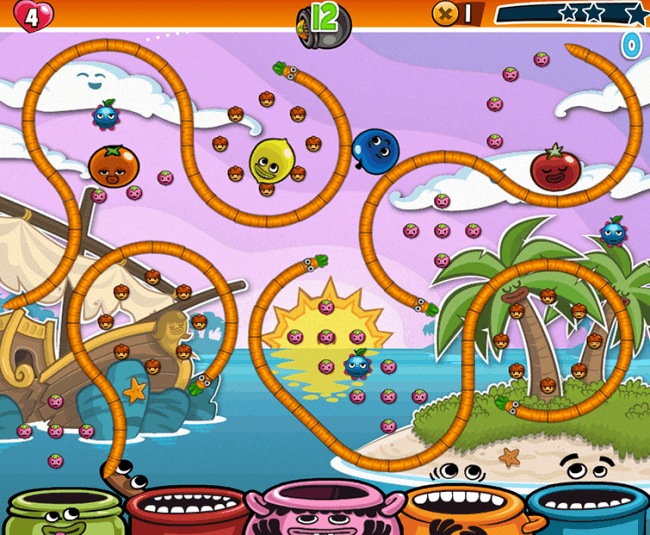 As is the case in Candy Crush Saga, failure to meet your level goals means the loss of a life. Lives recharge over time. It’s not a bad system; if you’re good (or just lucky), you can play Papa Pear Saga for a long time before you lose even one life. This is preferable to taking away “Energy” with each action, a system that most social/Facebook games are infamous for.

There’s a trade-off, of course. Boosts and power-ups in Papa Pear Saga can only be bought with hard currency. There’s no in-game currency that you can accumulate for point multipliers, extra balls, or other delights that can boost your score or save your pear-shaped butt when things are going badly.

Otherwise, if you’re a fan of Peggle, you should be able to sink right into Papa Pear Saga. It’s slower-paced than Candy Crush Saga, which makes it a touch less addictive—but your employer probably won’t have a problem with that.