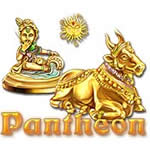 Webster’s dictionary defines the term “pantheon” as any given civilization’s gods. It also happens to be the name of an exciting gem-smashing diversion from NevoSoft, developer of well-received received outings such as 10 Talismans, Treasure Island, and Dynasty. Set in ancient India, and sending you on a quest to discover an entire mythical canon’s worth of exotic deities, it’s an eye-opening adventure desktop explorers would do well to embark on.

Despite the game’s gorgeous visuals-backgrounds include stunning scenes of animated waterfalls cascading down verdant cliffs and waves lapping sun-baked shores-there’s nothing exceptionally striking about base play mechanics. You merely click on groups of colored gems which, when clumps of two or more standing adjacent to one another are selected, disappear from play and, following gravity’s rules, make way for those stacked above. Predictably, the goal of each stage (a varyingly-shaped grid of tiles featuring said precious stones) involves eliminating all gold-shaded squares by making matches using them before a candle-shaped time meter runs out. Succeed, and you move onto the next stage, with new gods added to your collection every few levels. Mess up, and you’ll lose one of three lives, with the game ending when this supply runs out.

Per usual, greater obstacles (e.g., locked tiles only opened with specific gems, squares that must be used in multiple matches before they’ll lose their shading) are thrown at you the further you progress. Power-ups are also offered when several stones are eliminated in a single move, such as bombs that explode, destroying all jewels around them, or lightning that disintegrates all gems of a single color. Using power-ups, it’s additionally possible to spark off giant combos and clear whole sections of the screen at once. All of which, of course, come together to help create the comfortable, if sometimes challenging, dynamics through which advancement across a single-player, scenario-based campaign map becomes possible.

Offering a pleasing, yet largely tried and true approach to puzzle-solving, the title proves notable primarily for its relaxed pace and slick presentation. Seldom will you find yourself stuck, although later stages-set at rocky temples and beneath delicately swaying palm trees-do up the challenge factor by introducing more cramped playing fields, or layouts featuring hard-to-reach corners. However, a calm-inducing soundtrack (think twanging sitars and drums that pound out a steady beat) is joined by a whole host of ambient noises including flowing water and chirping birds, ensuring a mellow experience. Subtle night and day effects only enhance the featured atmosphere that much further, guaranteeing a pleasant time.

That it’s fairly easy to get into a steady groove and breeze through the title shouldn’t be seen as a negative. While Pantheon doesn’t last so long as most head-scratching romps, at least it won’t have beginners banging their head against the table. As an added bonus, the outing even features collectible trophies-e.g., statues and gilded ornaments-earned by accomplishing feats like making 10 successful quick moves or activating four lightning power-ups in a row. Collecting the entire set takes time, giving even veterans reason to keep pounding away at the program.

All in all, NevoSoft’s latest doesn’t leave us as stunned as some of its previous efforts. But production values remain high as ever, play is eminently enjoyable and the overall degree of polish doesn’t disappoint. Special mention need also be given to the title’s general theme. For a country of over 1 billion, and with such a rich and vibrant history, it’s a wonder India doesn’t receive more attention from game developers.

The bottom line being as follows… Pantheon isn’t perfect. But it still deserves every bit as much praise as veneration as featured entities such as Surya and Vishnu, from whom the developers drew inspiration.