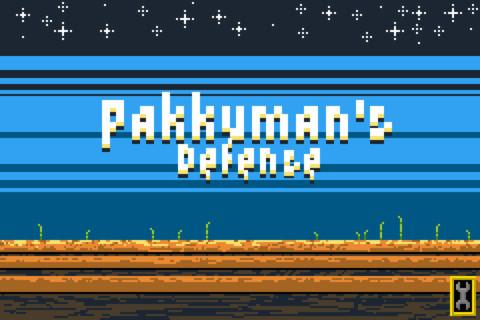 I’ll be Bac-Man…he did say that, right?

The grand illusion of retro games that few – including myself, very often – are willing to admit is that many of them were…bad. What are reflected on fondly as punishing, take-no-prisoners design choices were more accurately technical limitations, and more often, worse: calculated difficult spikes meant to keep butts in seats, and quarters flowing. So when I saw that indie developer Ido Yehieli (Tametick) had revisited Pac-Man to give it a little sprucing up, I wasn’t indignant: I was excited.

Pakkuman’s Defense is, like so many games these days,  a mashup of play-styles aimed at concocting an experience that smells of both ingredients, but tastes entirely different. Here, however, it isn’t two genres meeting in the middle, but rather one genre being stirred into the primordial soup of a specific game; a new strain of DNA being added to an old beast. Yehieli is an anthropologist, asking a question: what if Pac-Man had had the ability to defend himself? The game that answers it has you traversing all-too familiar mazes of glowing dots and low-fi fruit, earning both points and money for your talents of collection. For every $20 you bank, you’re given the ability to deploy one tower, which sits on the game’s grid lines above the spot where Pakkuman passed when you laid it.

It’s a simple change,  but the Butterfly Effect it creates is wonderful. Far from an observational experience – “isn’t it neat how these two genres interact?” – Pakkuman’s Defense has your brain firing synapses it never used playing the title’s muse. In truth, it solves a persistent problem the original had: a profound emptiness. You see, Pac-Man was a game about the a helpless hero trying to survive against an unstoppable onslaught. Success was defined by how strategically you could run away, and offensive respite was always temporary. In this way, “winning” only meant staving off the inevitable, and inevitable loss is very stressful.

By arming you with droppable projectiles, the game becomes a strategy title. How do you think about sections of the grid in ways where you create the coverage you’ll need to destroy stalking ghosts? Do you start at the most recent level, or select lower levels from the menu to earn more points more easily? It becomes an action game, offering the nuance of multiple strategies. Go for the fruit, use a burst of cash to gain a foothold, and stay aggressive; or, perhaps, strafe carefully about earning as much and spending as little as possible, so you can harness your roll-over cash to survive the harder level. It never forgets about its arcade roots: play is underscored by a sublime chiptune soundtrack that heightens excitement and focus, visuals remain pared down, spontaneous power-ups cause your heart to race as towers triple their strikes, or enemies freeze, and – integrally – threats still spawn at random. 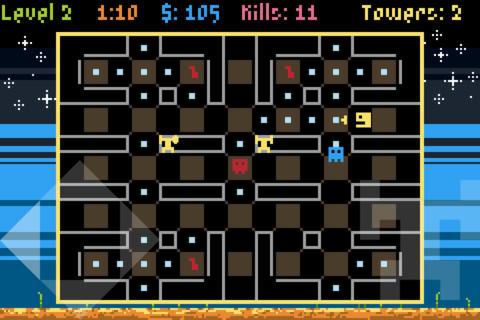 Poetically, perhaps, the game’s one major pitfall lies in the constraints of new technology.  A combination of the dreaded virtual joystick and poorly thought out control options lead to a difficulty curve that feels inorganic, and unnecessary. While imprecise, I’d argue that a mobile shooter-style stick with room for freer flow between directions would have been a middleground solution to the game’s choices of “impractically condensed” and “impossibly spread out.” Here, the source material comes back to haunt its would-be usurper, reminding the players of one of the few remaining charms of the “good old days,” or at least making a strong case for iCade support.

In the study of Pac-Man as a videogame text, then, Pakkuman’s Defense emerges less as a mad scientist and more as the good doctor. A game which makes strides to heal the wounds that even time can’t, and offer up a rounded experience. Just as frustrating at times, to be certain, but in equal measure nuanced; full of not just inevitable defeat, but hard-fought victory, and – if you play your cards right – swift success. There’s a catharsis here that the seminal arcade classic didn’t – couldn’t – provide…a knowing freedom from the era of dwindling bags of quarters.

The Dreamatorium of Dr. Magnus Review