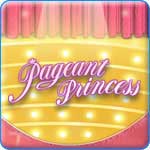 Playing Pageant Princess will no doubt having many hearing "There she is, your ideal…" song from Miss America pageant in their heads. When Bess loses her waitressing job after 15 years, she finds herself having lunch with Florette, who encourages her to get involved in the pageant business though her pageant days are behind her.

In this time management game, the contestants enter the dressing room with three to five stars indicating their happiness level. Bess seats them at the make-up table where they get facial masks, make up, or both. Then they go change their clothes followed by a hair styling, maybe getting finger nails done, and finishing off with accessories. The hard part comes in moving the contestants from station to station while having to select the style that makes them happiest.

Bess and her daughter Babs do the dirty work of cleaning up the dumpy dressing room. The pageant begins at a Seattle mall, eventually upgrading to a TV studio. Contestants range from cheerleaders and brainiacs to Southern bells and aristocrats with temperaments all over the charts.

The style selection appears in a pop-up, which proves tiring while multitasking in moving contestants and giving them boosters to prevent them from losing all their stars. If their gold stars go, so do they, and that’s one less contestant Bess has to help her reach her goals (regular and expert) for the level.

As if keeping up with stations, styles, and happiness weren’t enough, you also have to stay on top of the contestants’ events: evening gown, casual wear, interview, and talent. When Bess puts as much of the same event out on the stage as possible, she earns chaining bonuses. For example, she leads three girls going out for their interview and the first scores 115. The next one scores 115 x 2 (for two in a row), and the third scores 115 x 3. Those chaining bonus can be the difference between replaying a level or moving to the next one.

The bonuses are lifesavers. They make Pageant Princess less painful. The make-up maven has Bess zooming through the make-up stations without dealing with the style pop-up. Hair hook-up works the same way except it applies to the hair stations. The energy boost speeds Bess’ movement and the pep talk bonus improves all the contestants’ happiness levels.

All stations are available in threes and each has one speed upgrade. Pacifiers (yes, that’s what the feature is called) soothe the contestants boosting their stars. The first pacifier is mineral water and Bess can upgrade to three. Then the next one is vitamin water, which boost the contestant’s mood faster. Finally, cupcakes. But why would these contestants eat cupcakes? They’re like models and watch every calorie. Regardless, it cheers them up.

Bess can hire two assistants. One stands at the make-up station and the other at the hair station. When the contestants finish at the station, the assistants improve the contestants’ hair and make-up, which improves poise and enhances their mood. It would be nicer if the assistance could cut down the style pop-up windows. These pop-up windows and dragging the women from one station to the next quickly becomes taxing. You can buy all the upgrades — not many — by the midway point (or a little after) of the game.

The difficulty level goes all over the place. The Seattle mall locale works fine, but the next locale has a couple of sticky levels that take many times of replaying to survive. You can play an earlier level to try to get more money for upgrades, but the game doesn’t give much even at expert level. Because of the work involved, sometimes it helps to take a break before trying again. Even if you don’t lose any contestants and chain the events, you can still miss the level’s goal by a bit.

Pageant Princess throws a few sharp curveballs. In one scenario, the brainiac is more nervous due to exams so she proceeds station to station in a different order. (Most contestants go from make-up to changing to hair.) Another scenario has several contestants needing to make another outfit change due to a last minute event change.

The average graphics and music suit the game. Replay value is no different from any time management game — ou can replay levels if you’re motivated to receive an expert score on every level. Every few levels, Pageant Princess declares a winner, but it doesn’t excite as you don’t know one girl from the next.

Pageant Princess puts you on edge almost the whole time because of how it functions, so play this one if you’re looking for a challenge that makes you feel jumpy. Perhaps, that’s by design. After all, the contestants constantly feel pressure and stress. For a relaxing game that makes you smile, look elsewhere.