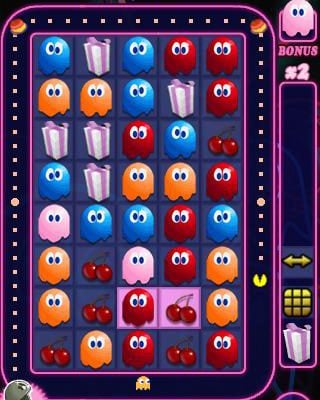 As the first video game mascot to appear on the scene, Pac-Man holds a special place in our hearts. That’s not to say he can do no wrong – but we’re always inclined to give him the benefit of the doubt. In celebration of his 30th birthday, Namco is sending everyone’s favourite yellow munchkin somewhere he’s never been before – to the world of match-3 gameplay! Much to our surprise and delight, Pac-Match Party brings a number of new twists to the genre that help it hold its own against the competition.

All of the basics of the match-3 genre are here. Players will match 3 like-colored ghosts, cakes, presents or cherries to make them disappear from the playing field. With their space clear, the gems above it will fall down and make room for new gems up top. For a lot of match-3 games, this is both the gameplay’s beginning and ending. But with Pac-Match Party, things are just getting started. 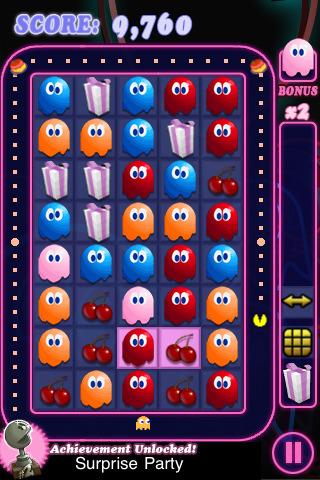 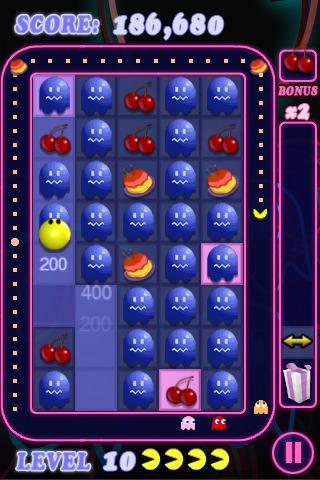 On the outside of the playing grid, Pac-Man is being pursued by four ghosts. The ghosts chase him all along the outside frame of the playfield, and they clearly seem to be moving at a quicker pace than dear ol’ Pac. The situation looks grim until you realize that the power to save Pac-Man is entirely in your hands! Every time a player makes a match on the board, Pac-Man will cheat death by jumping a good distance ahead of his current location. If you keep making matches, everyone’s a winner. If you take too long, the ghosts will get him and you’ll lose a life – and you only have 3 before its game over.

As exciting as it is, protecting Pac-Man is only half the game. The other half is all about clearing pink tiles from the playing field. The tiles occupy squares in the background, and you can only make them disappear by making matches with the items on top of them. Clear all of the tiles and you’ll advance to the next of 30 levels.

As the game progresses, the difficulty on both fronts evolves. On the game board, more and more pink squares begin appearing behind the field. By the time you’ve reach the 10th board the game does away with that numbered cuteness and fills every square inch with pink. Some squares even begin to appear with different colors, requiring you to clear them more than once in the level. On the outside of the playing field, the ghosts relentless pursuit of Pac-Man gets quicker and quicker, forcing you to match quickly if you want the birthday boy to survive.

The game also includes power-ups, which you earn by matching presents. These come in a variety of forms, from cherry bombs that will eliminate all of a certain playing piece to arrows that will wipe out entire rows. The only thing we wish Namco had done differently was include their Unite social gaming platform in this initial version of Pac-Match Party. The game features a host of achievements, but without UniteSDK none of these will be tracked in a way that can let you brag to your friends and co-workers. For a company looking to spread their network, it seems odd to not include it in all of your new games. 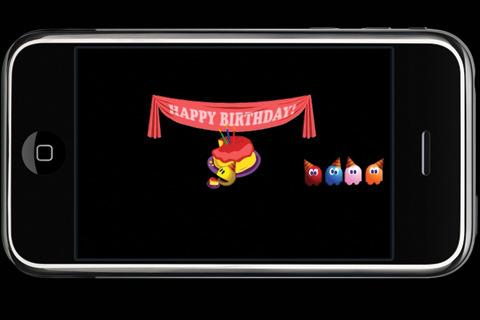 While Pac-Match Party is firmly rooted in the match-3 genre, there are a number of nice touches that harken back to Pac-Man’s roots. One power-up, for example, lets you place Pac-Man on the board to gobble up some of the ghosts without the need for a match. And every so often, like in the original, you’ll be presented with an adorable little cut scene that provides a nice touch of comic relief (and an even nicer touch of nostalgia.)

We’ve said before that 2010 is shaping up to be a renaissance year for match-3 games, and Pac-Mac Party does little to dispute that. Combining an off-the-board race against time with an on-the-board war against tiles, Pac-Match Party combines a variety of elements into a single fresh match-3 experience. Fans of the genre with a long-standing love for Pac-Man should consider this one a must-buy.