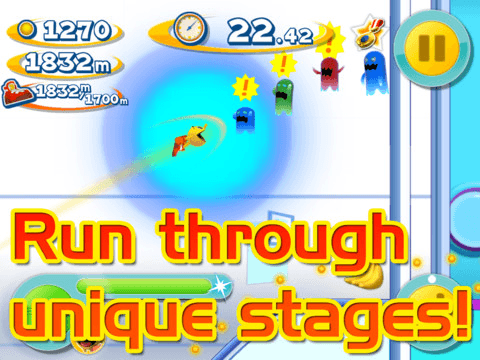 Pac-Man Dash: the game that plays itself!

For as much as gaming has managed to change and evolve over the years, there have always been a few iconic characters that manage to stick around through all the ups and the downs. Pac-Man is certainly one of those icons, and embracing the world of mobile gaming in 2013, the hungry little yellow man returns in his first attempt at an endless runner game. As you might expect, Pac-Man Dash! puts players in the role of Pac-Man himself, as he runs through a number of gorgeous 3D environments, scooping up all those tiny yellow dots (called “cookies” in the game), eating fruit, and turning ghosts blue.

The visuals in Pac-Man Dash! are inspired by the upcoming console game and animated TV series, Pac-Man and the Ghostly Adventures, and you can immediately tell the tremendous care and precision that went into constructing this bright and populated world. There are five different environments to run through, each with its own unique setting and theme, while still remaining a part of a larger cohesive whole through in-game mechanics; although sometimes the incredible attention to detail in the backgrounds can be counterproductive to the game’s lively speed, which made me a bit dizzy on more than one occasion. Still though, it’s certainly nice to see this kind of variety in an endless runner game, and from a strictly technical standpoint, the presentation and polish to the game is absolutely flawless. The graphics are top-notch, the animations are fluid, and the amount of content and in-game items just manage to hit that overall sweet spot.

However, once you actually start playing Pac-Man Dash! and begin to get a glimpse of how the game’s format works, you’ll quickly recognize what becomes the ultimate downfall of Pac-Man’s first hop onto the endless runner scene: the game is just too easy, to the shocking realization that you don’t even need to play it yourself in order to progress through the adventure. While Pac-Man Dash! is quite clearly an endless runner at heart, the game is divided into dozens of “missions” to attempt to give the experience a more level-based feel. Each mission is comprised of a single objective that Pac-Man must complete before he can move onto the next mission in the level set, with the goals ranging from “Eat 10 ghosts” to “Run 1,000 meters.”

Every one of these singular goals can be reached in mere seconds, and then there’s really no point in playing the rest of the level afterwards, since nothing you do in the mission beyond this point actually matters. There were more than a few times after I completed a mission’s goal, where I just put my iPad down and let the timer run out while I checked my Facebook or flipped through the channels on my TV. Sometimes, I didn’t even touch anything from the very start of a mission, and simply sat there and watched Pac-Man go through the motions, earn whatever trivial objective stood before him, and then just keep pointlessly running until the timer ran down. I was literally progressing pretty far through the game without even actually playing it. 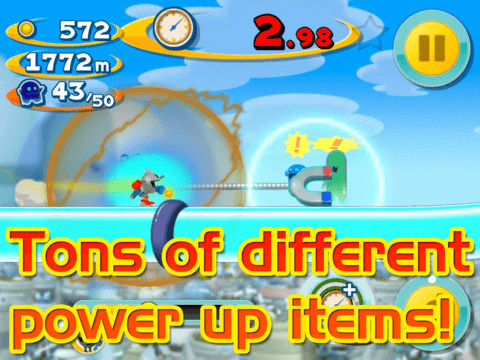 But even so, the missions and goals themselves are only a part of the problem with Pac-Man Dash! The bigger issue comes from the fact that this endless runner is completely devoid of any sense of foreseeable challenge. To put it quite bluntly, there’s literally no way to die. If you miss a jump, Pac-Man will just fall down and land on another track that pops up from the bottom of the screen, going on and on into infinity. This makes previous goals like “Run 1,000 meters” impossible to miss, since Pac-Man will reach that milestone regardless of what you do to help, and will eat enough cookies and ghosts to keep the timer climbing well past the seconds he needs to complete it. Even the iconic Pac-Man ghosts are hardly a cause for concern in the game, because even they can’t touch your invincible yellow hide! For instance, every time you approach an enemy ghost on the track, there will always be a piece of fruit sitting right before them: turning the ghost blue, allowing Pac-Man to gobble them up, and never putting you even remotely close to danger.

Even though Pac-Man Dash! offers a ton of pretty neat power-ups you can use (like an all-powerful metal version of Pac-Man, or a helper bot named Cylindria who electrocutes everything in Pac-Man’s path), because the game is so incredibly and effortlessly easy, there’s never any moment where you’ll actually need to use them, and doing so only feels like overkill, as there becomes even less for you to do in the game once Pac-Man is exhibiting his supped-up power skills. While the game is free-to-play, you’ll only be able to play a handful of levels at a time before Pac-Man’s energy meter runs out, and you’ll need to wait for a bit or purchase some more. However, this freemium model is more than fair for what the game is, and offers a generous amount of game time with minimal periods of waiting. 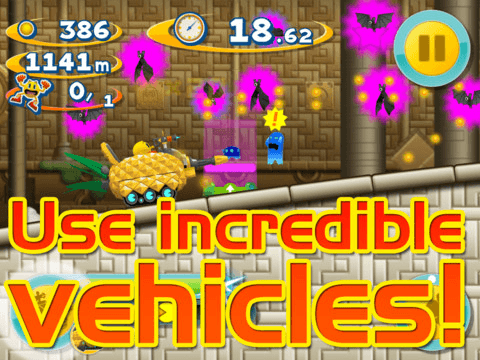 So even though the visuals and presentation of Pac-Man Dash! go above and beyond to bring our little yellow friend into the next generation of gaming (the fruit look so good that you could eat them!), Pac-Man still has a thing or two to learn about gameplay mechanics in 2013. When a game is so easy and pointless that I’d rather put it down and let the timer run out than finish up the remainder of a mission myself, it’s hard to justify playing the game in the first place. Even all the cookies and 3D fruit in the world couldn’t satisfy my appetite of just wanting something more from this one.