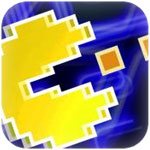 iPhone gaming may still be in its infancy, but that hasn't kept some companies from trying to lay the foundations for strong franchises nice and early. Take Namco for example: Pac-Man: Championship Edition marks the fourth Pac-Man game on the iPhone in little more than a year. And while Pac-Man Remix (the last Pac-Man game on the iPhone) brought in some fresh gameplay ideas, Championship Edition is just another port of a game we've already seen before, isn't it?

Thumping sounds and neon lights help set the scene for this new take on an old classic. Championship Edition has a lot in common with the original game, but with a twist. Rather than clearing the board of dots and advancing to the next round, Pac-Man will only have a handful of dots available to him at any time. Clearing those away will reveal a fruit which will unveil more dots. The object of the game is to get as high a score as possible in a set period of time by eating up all the dots, fruits, and ghosts you can.

While it's true that Pac-Man: Championship Edition began its life as an Xbox Live Arcade game back in 2007, what you'll see here on the iPhone isn't just a pixel for pixel rehashing of what's come before. While the previous game offered up a handful of unique and exciting maps and modes, Championship Edition on the iPhone uses these as the starting point in a series of missions. Can you reach a set score in a certain amount of time, can you eat x number of fruit before dying — that sort of thing. These missions add a fresh coat of paint, making sure the title offers up something new to gamers who have already spent countless hours with Pac-Man: Championship Edition back in 2007.

But what if you haven't spent time with this new take on an old classic? What if you haven't had a chance to dabble in Championship Edition before? You're going to find one of the most challenging, fast-paced, hardcore versions of Pac-Man around. Designed by Pac-Man's creator Toru Iwatani as his swan song before retirement, the game offered the first truly successful re-invention of Pac-Man since the game's debut back in 1980. The idea was to re-invent the game in a way that offered such speed, such challenge, that even the most hardened of Pac-Man veterans would find something awe-inspiring here. Unfortunately for the iPhone version, the brilliant game design isn't the only challenge players are going to face.

Since its debut on the iPhone little more than a year ago the Pac-franchise has suffered from a seriously fatal flaw: control issues. Pac-Man Remix only fared slightly better than the earlier releases of Pac-Man and Ms. Pac-Man, so we had assumed that Championship Edition would inevitably suffer from the same problems. Turns out we were right.

the game offers up a variety of control options, none of them feel all that natural. The “swipe” controls once again felt the most responsive, but they just aren't where they need to be. What's worse is that if you're both a lefty and prone to making big swipes like I am, you're going to hit that poorly placed pause button over and over again, often leading to an accidental “retry” click which will restart the level.

If you find you've finished everything the game has to offer and are still craving more, an expansion pack is available for $3.99 that adds 100 extra missions, 10 new courses, and a challenge mode. The inclusion of an expansion pack at launch has lead to a lot of controversy with many gamers calling the paid app a glorified demo. If you're having concerns about this due to this internet chatter, you can lay them to rest. Yes, the offering here feels a little light compared to the complete package, but Pac-Man: Championship Edition has problems that go way beyond the amount of content.

Control issues for the Pac-franchise have yet to be rectified, and regardless of what else works or doesn't work in this release, the lacklustre control offerings are what's going to sink this. Add in a squished screen and a gameboard that is simply too large for the iPhone's small display and you've got a recipe for extreme frustration. You could get away with the weak controls in previous iPhone Pac-Man releases, but Championship Edition has always been about blazing speed, and you can't make 90 degree turns at breakneck speeds with broken controls.