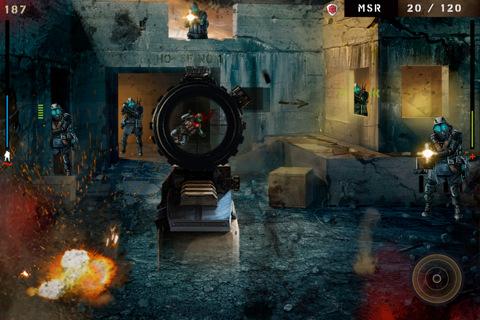 Overkill shoots up the crossroads of Freemium St. and Great Action Blvd.

When people hear the word “freemium,” they’re minds usually goes to one place: social games. And while farms and puppies that you share with your friends definitely have a place on the iPhone, there are times when a little more action is in order. Craneball Studios latest release manages to deliver on both accounts, delivering a great freemium pricing structure and a heaping helping of red hot lead.

At its core, Overkill is little more than a shooting range simulator. Players will control their aim and trigger via on screen controls as they attempt to shoot stationary enemies as they slide into view, just as targets at the range might. The only difference? These targets will shoot back.

The object of the game is to survive as long as you can, earning points and cash along the way that will level you up and let you purchase more ammunition, in-game weapons, upgrades, and environments. The number of unlockables here is massive. At the moment there are 12 different guns, each with their own unique style and unlockable upgrades, as well as four different environments. Like most freemium games, there’s a basic currency and a premium currency, and you’ll need a mix of both if you want to unlock everything.

Unlike other freemium games, Overkill manages to be surprisingly gentle in its premium currency requirements. Sure “Overkill Medals,” the game’s premium cash, can be purchased in-app or unlocked by downloading partner applications – but Overkill also lets you earn them over time, giving you one OM for every rank you climb. There are also frequent alternatives to spending OM, like how different levels can be purchased with it or by reaching a set score.

Having all of these great weapons and upgrades would mean nothing if the gameplay wasn’t there, and gameplay is something Overkill has in spades. While a stationary shooting gallery might just be the most basic type of shooter you can imagine, the controls are tight and the action can get surprisingly fast. As things ramp up and you eventually get shot down, Overkill definitely delivers that “I’ll bet I can do better next time” feeling that makes some games incredibly hard to put down. 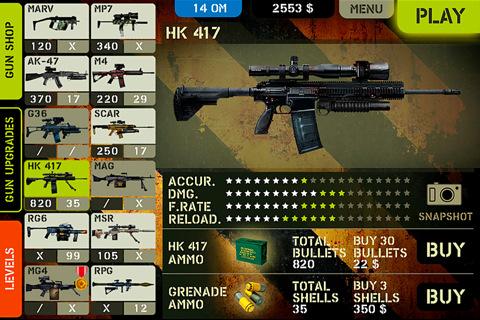 Thanks to Game Center, it’s easy to keep track of how well you’re doing on the leaderboards – but beyond that you really won’t find any social elements to speak of. It’s a strange feeling for a freemium game to be so devoid of social play, but it’s certainly not something that feels like it’s missing from the package either.

The only real complaint to be had here is with the lack of originality in the visuals. Whether or not the developers are looking to emulate the dystopian future of Killzone or Jin-Roh can’t quite be determined (those two are already so alike to begin with), but it seems pretty clear that the art team on this one was definitely drawing from one of these two properties for inspiration.

As a big fan of Gun Bros, I’ve been anxiously awaiting another great freemium action title on the App Store for months now. In that regard, Overkill has delivered exactly what I was looking for. While the two games may share little in terms of gameplay, they’ve both managed to pull off that “just one more gun” pricing structure perfectly. It’s a gree freemium model that I hope we see more of in the future. In the meantime though, I’m just glad we have Overkill.