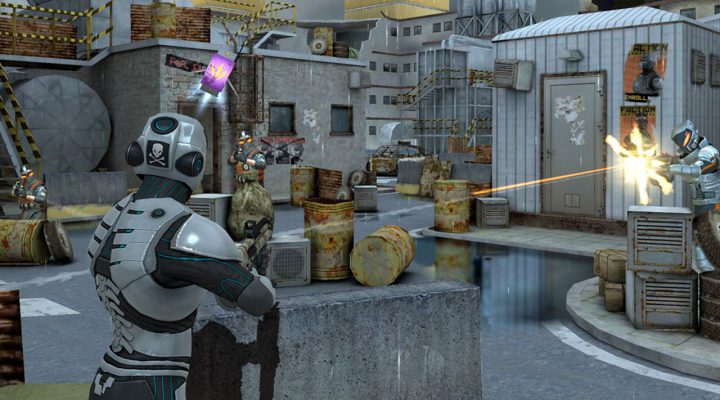 Very standard all around.

I remember when cover-and-fire mechanics were a novelty in third person shooters. Now they’re a staple; something that we’ve come to expect, and sorely miss when they’re left out.

The cover-and-fire mechanic is so prevalent in gaming today that Craneballs Studios felt comfortable employing it as the game’s main mechanic. Unfortunately this means that, if cover-and-fire shooters aren’t your thing, you’re not going to get that much out of Overkill 3.

In a departure from the previous two entries in the franchise, each level in Overkill 3 primarily involves watching the protagonist move from section to section, taking control and ducking behind some rubble, popping up to shoot at some enemies, and then crouching back down to reload. 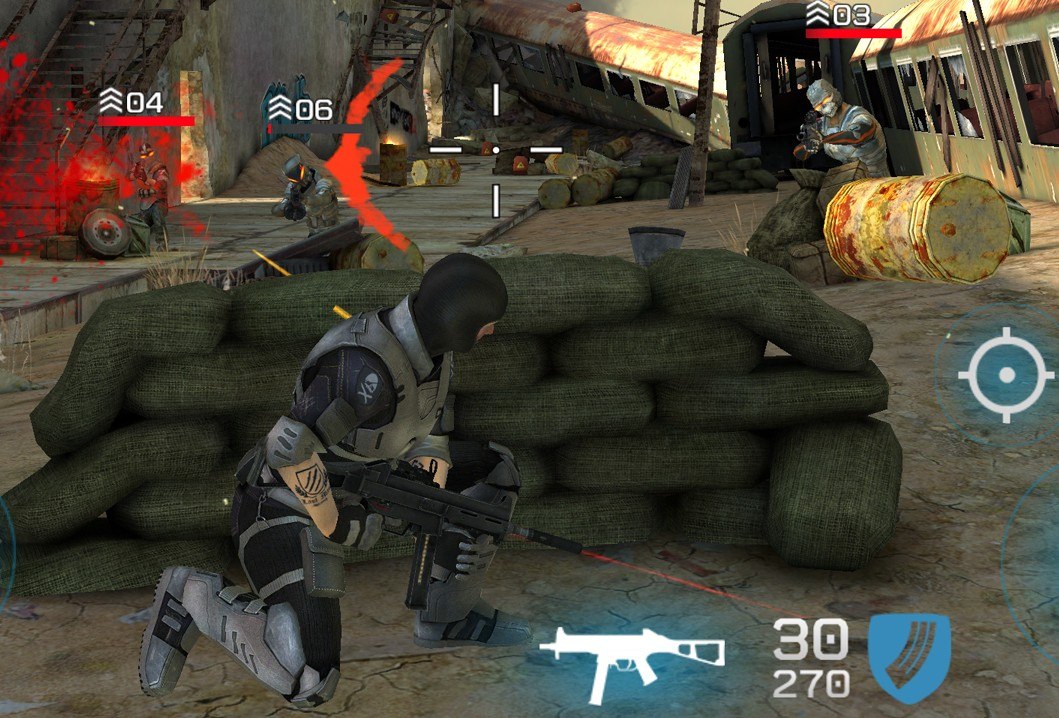 Sprinkled throughout these missions are the occasional “machine-gun levels” (which are more akin to the previous two Overkill games), where players man a static machine gun emplacement and must kill the enemies as they come in, before they can whittle your health away to zero.

It sounds super intense and exciting, but for a game that is 99% action, Overkill 3 ends up feeling pretty average.

Apart from the top-notch visual presentation, there isn’t any other quality of Overkill 3 that makes the game stand out and shine. There’s nothing inherently bad about the game – it’s just a fairly run-of-the-mill shooter experience. The environments are futuristic, war-torn, and rusty; the game mechanics center around the aforementioned cover-and-shoot concept, and you buy little gun upgrades with the currency you earn in the game. It’s all very standard, without a compelling twist to really hold a player’s interest. 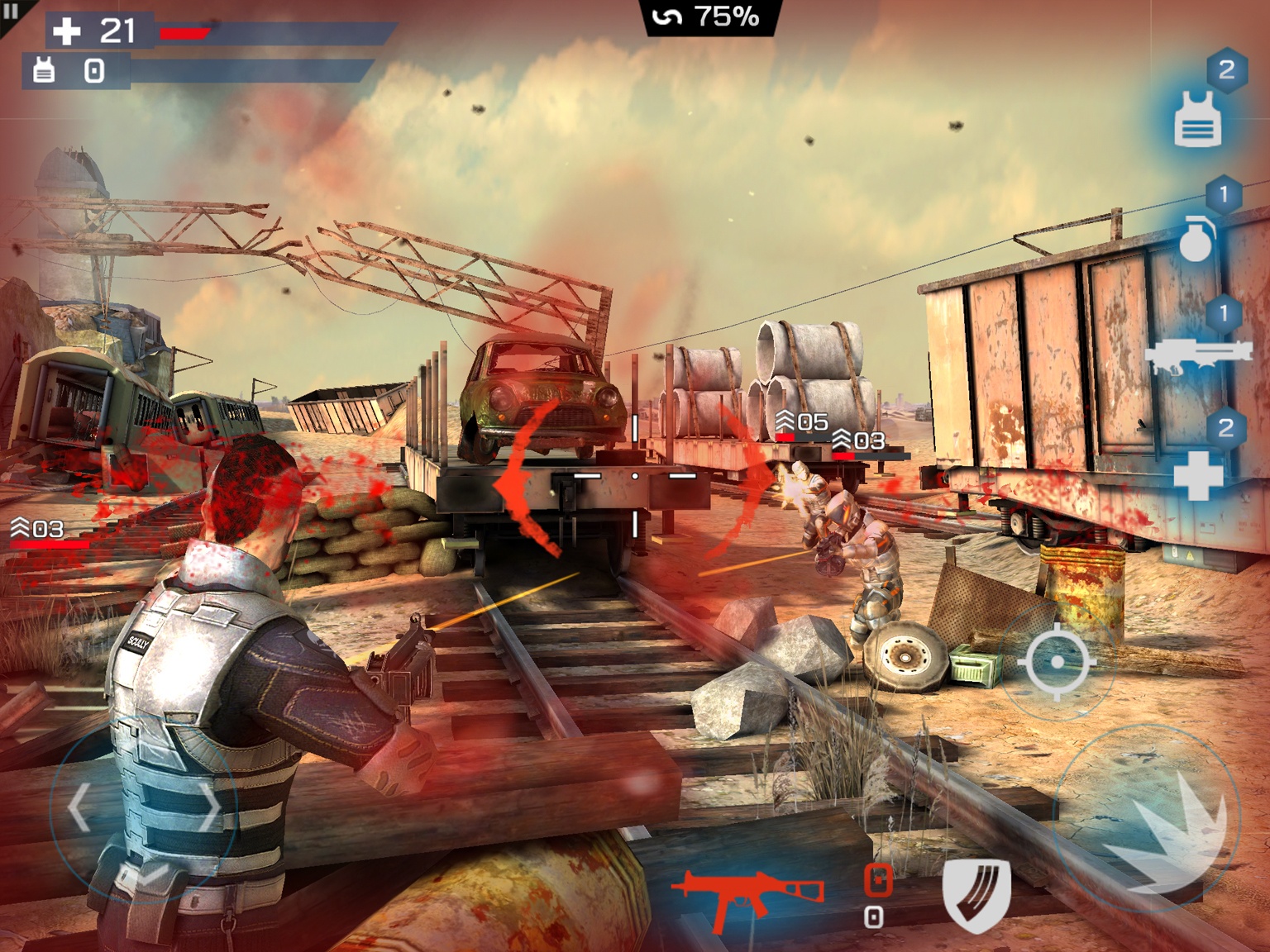 In short, anyone who is familiar with shooters on mobile devices will have no trouble acclimating to the game.

I feel like there is the space for elements that could have been exciting. There are a few bullet-time sequences that involve dodging sniper-fire and landing head-shots on the aggressors, for example. But these bullet-time moments are fragmented from the actual gameplay, taking place away from the firefights, usually between level sections or at the level’s conclusion. Maybe if these moments were integrated into the firefights, the gameplay would benefit from the occasional, visually-rewarding, slow-motion segment.

Just something to make me say, “Oh, that was cool.”

Besides the lukewarm gameplay experience, Overkill 3 seems to artificially inflate the difficulty by making the guns about as inaccurate as possible without being completely useless. When the game requires rapid, precision aiming, there is nothing more frustrating than having a target in your sights only to watch most of your bullets completely miss. If the game wants to be difficult, it should punish me by restricting my ammo or making the bad guys harder to kill. Don’t punish the player for doing exactly what is required of them.

You can use the credits you collect from completing the levels (along with currency bought through IAPs) to upgrade your gun and make it marginally more useful. There are a bunch of minor modifications you can make to each gun, but the changes with each upgrade typically only increase a stat by a percentage or two. On the upside, these upgrades are relatively cheap, so you’ll be able to upgrade your gun a few times after completing a handful of levels. You can also upgrade your armor to get more HP, which is always a good idea when you’re a human bullet sponge.

Overkill 3 seems to be the victim of an identity crisis, one where it wants to be something different than what it was, but is too afraid to try anything innovative. The result is a decent shooter that suffers from some questionable design decisions. If you like shooting games, it might be up your alley, but ultimately I found it hard to be impressed with what Overkill 3 brings to the table.