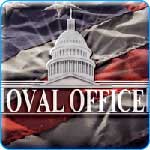 With the countdown to election season quickly drawing near, it seems like practically everyone’s got an opinion (and one they’re all too happy to share) on how America should be run. Thankfully for the more outspoken among us, would-be policy makers finally have a chance to put their money where their mouth is with Oval Office.

A comprehensive simulation of modern politics and matters of state, the game quickly wows with its detail and depth, even if the scope and difficulty will be hard for the average player to stomach.

To wit, let’s get one thing off our chest up front: This isn’t a casual game by any stretch. Albeit an independently-created title, developer Positech (Kudos, Rock Legend) simply falls back on the same formula that served it so well in 2005’s similarly styled Democracy, a relatively hardcore desktop outing.

Hence what you get here is a strategic challenge whose icon- and slider-based interface is super-intuitive, and one that does a solid job of explaining cause and effect. However, the amount of information presented by the title, from budget reports to poll results, constituency breakdowns, historical charts and intelligence agency feedback, is nothing short of overwhelming. What’s more, be aware that while turns may be short, sitting down with any scenario entails making much more of a commitment to the play experience than in the average downloadable outing.

On the bright side, you’ll find a lot of mood-setting material here, from photos of John McCain and Hillary Clinton to quotes by Dick Cheney and Michael Moore. There’s additionally a range of selectable parties including Republic, Democrat, Green, Freedom and many more that any newspaper reader will quickly recognize.

Wish fulfillment’s also a major selling point: As commander-in-chief, it’s your job to keep voters happy, poll results high and the nation afloat as election season draws near. Therefore, unlike previous titles from the same studio (which offered mostly fictional scenarios), there’s a bit more flavor and personality to the experience. Even so, the menu-, graph- and statistic-heavy presentation, like the title’s general lack of audiovisual polish, may leave some feeling cold and detached.

While it won’t win any awards for graphical fidelity, the main game screen – divided into seven slices representing foreign affairs, welfare, economy, tax, public services, law and order and transport – does help keep your job manageable nonetheless. Within each section, a variety of circular icons appears representing relevant issues, be they finance-, public health- or education-related.

Via meter, colored line, partially-filled bar or pop-up window, feedback is quickly given on interrelated topics, and how adjusting policy positively or negatively impacts the situation or subject. From here, along with the help of several ministers whose effectiveness and loyalty is variable, it’s your job to source information; juggle relationships with multiple factions like parents, environmentalists and farmers; and use the political capital awarded each turn to govern the nation.

The main (and considerable) dilemma at-hand is the sheer amount of info that needs processing, as well as tactical foresight required to properly conduct oneself, let alone make heads or tails of it all.

Typical worries include deciding whether to regulate vehicle emissions; ban same-sex marriage; impose Internet censorship; offer tax incentives; nix praying in schools; or subsidize small businesses at the risk of alienating supporters, cheesing off party allies or even causing an outbreak of homelessness or infectious disease.

So while we’re stunned by the somewhat elegant manner in which such a vast array of subjects has effectively been modeled, it’s still a lot more to chew on than most keyboard jocks might expect. Certainly, a great deal of replay value has been built into the equation, with several unorthodox options offered that let you tweak everything from starting parameters to the evolution of political clout. But man, oh man, are desktop newcomers in for a wicked surprise in terms of learning curve.

The short take: Billed as a casual game, Oval Office is anything but. Regardless, it’s still a welcome diversion, and one potentially packed with weeks of excitement. The title plays to a very specific audience though, and makes few sacrifices for sake of the neophyte. Provided you feel you fall into this particular niche, or just want to prove you really can give Bush a run for the money, however, it’s definitely worth the cost of a small campaign contribution.