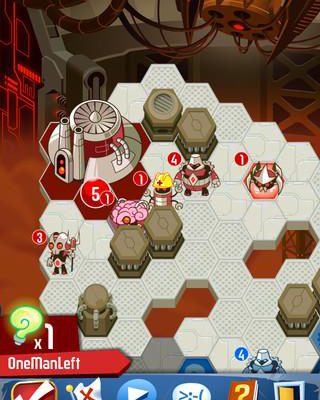 You’ve got to keep your wits about you!

Have you ever played the kind of game that keeps you distracted from fulfilling your real life oblig–hold on, my opponent just made a move in Outwitters, I’ll be right back. But you know what I’m saying! The type of experience that just grabs you, and keeps you thinking about it when–what do you mean he killed my sniper!? Wait a minute… what was I saying?

Okay, I promise you have my undivided attention now, if only for me to make one thing 100% crystal clear: go download Outwitters right this moment. Here’s the link. The game is free. Seriously, I’ll wait. Do you have it on your device now? iPhone, iPad, it’s not important which, really! Good. Now I suppose I should tell you a little bit about how big a favor I just did you.

From the purveyors of awesome at One Man Left (Tilt to Live), Outwitters is a turn-based strategy game with one big catch: you and your opponent are both caught in the fog of war, and can only see each other when you fall inside the move radius of one another’s characters. Okay, I suppose the big catch is that you’re playing as crazily advanced creatures who can do things like shoot lasers out of their eyes, but work with me here.

In truth, the game has three factions – the sea-faring Scallywags, the plushy “Adorables,” and the metallic “Feedback” army – each composed of six classes of soldier with which to do battle.  Classes range from your standard “soldier” (mid-range movement and strength) to an agile “runner” (long-range movement and little strength), to a specialty class unique to each faction. My favourite is easily the Feedback’s “scrambler,” who turns enemy characters within 3 spaces into subservient automatons. 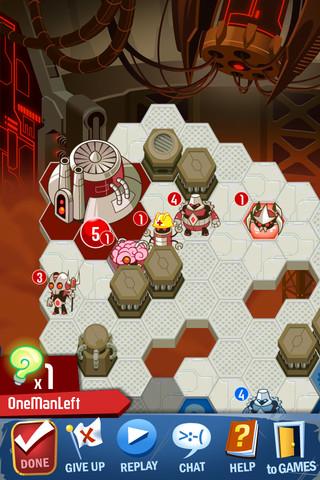 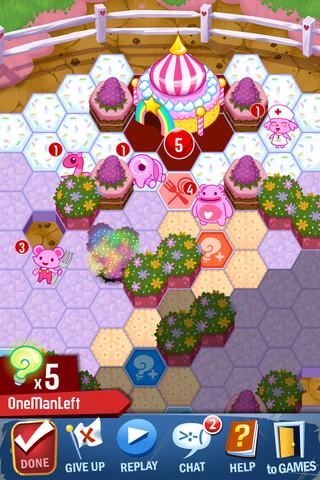 The goal of each game is to outmaneuver your opponent one turn at a time to wade through the darkness, take out their forces, and destroy their base – itself a structure with five hit points. And trust me: as difficult as any of this might sound, Outwitters proves almost impossible not to understand, and even harder to resist. Yes…harder than impossible to resist.

One Man Left makes this possible by compartmentalizing everything spectacularly, and organizing the game’s many tactical machinations in a way that are completely non-technical. You’re allowed to move each character once per turn, and – if you come in their range of an enemy character – attack with them as well. In addition, you’re allowed to spawn one new troop from each of your zone’s  spawn tiles. All of this, however, is reigned in by “wits,” Outwitter‘s default currency of war. To start, you only have five to spend each turn, so far from being able to do everything I mentioned, you’ll have to choose carefully.

And ultimately, this is the masterstroke of the game. Where “easy to pick up but hard to master” is for so many iOS titles a beat-to-death PR catchall, One Man Left – like Robot Entertainment with Hero Academy – manages to give the saying some substance. By draping the game with a vibrant, soda-pop aesthetic and hiding the sense of depth behind crowd-friendly rules, the indie team turns Outwitters into a game where newcomers can – and will – find themselves becoming experts. 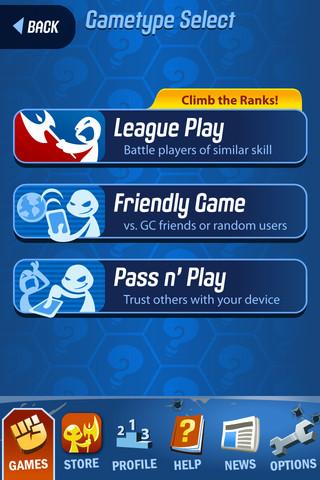 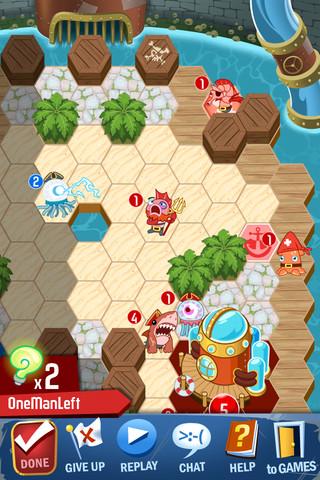 With that said, there’s plenty of room here for those who are experts from the get-go; Stacraft veterans looking to kill some time on their phone or tablet, or any seasoned tactics player. The game keeps things fair by offering a League-style play mode where your wins separate you into brackets that keep you paired up against players of a similar skill level. Meanwhile, Pass-N-Play and friendly Game Center matches ensure you have tons of pressure-free opportunities to sharpen your wit… pun intended.

Meanwhile, play itself takes on such a wonderful, natural internal variety that “getting trounced” is far less likely than you think… especially after you’ve got a couple games in you. Having lost and won a fair bit to the game’s pool of beta testers, I can say that success depends on a vital mixture of timed aggressiveness (charging for the base!) and tempo play (healing up key players, spawning distance fighters like snipers, banking wits to save for your special unit). Because of the shadowy nature of the game, a randomness emerges that keeps everyone a little off balance, for the better. So far, every game – win or lose – has been a great learning experience, and Outwitters will no doubt be the kind of game where no two players rehash the same experience with one another.

And if it weren’t enough that their game was spectacular, One Man Left have gone and proven to be some of the most classy designers out there, integrating a seamless chat system and game center friend request button alongside easy-to-navigate menus. Their first news post – “Welcome to the World of Wits” – even lets players know where to find responsive opponents, emphasizes the team’s distaste for ads, and politely implores you to take a look in the game’s store. Which, by the way, is absolutely worth doing. For $2.99, the game does you one better than Hero Academy, unlocking every one of the existing three teams, and guaranteeing access to all future content.

All of this, however, ignores the most important question of all: why are you still here!? Go play some Outwitters already!