Home / Reviews / Out There Somewhere Review

Out There Somewhere Review 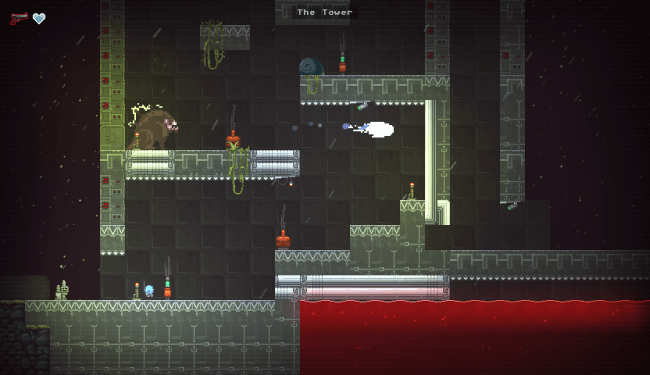 The biggest problem I run in to when I’m trying to write a game review is when I don’t want to stop playing the game long enough to actually write the review. You would think the biggest problem is when I’m enjoying a game so much that I lose track of time and forget to eat or sleep, but no. It’s the writing. You see what I go through for you people?

The most recent culprit of being just-too-good-to-stop-playing is an indie platform puzzler game called Out There Somewhere. It’s developed by a crazy talented team of just three people out of Brazil who call themselves MiniBoss, which in itself is totally boss. You play as an astronaut named Yuri from the Great Mother Planet. You are in search of Grigorin, your arch enemy, on a planet filled with puzzles. Luckily you’ve brought along your trusty teleportation gun to help you solve them.

Using the keyboard or a gamepad, you’ll traverse the 2D world with simple run, jump and shoot controls that would be right at home on a NES or Sega pad. Moving Yuri around the world feels great. Even though you don’t need precision controls on a Super Meat Boy level, it still helps that the bit of timing you need to complete puzzles is not hampered by poor controls. You basically move about the world room-by-room Metroidvania style, figuring out how to get from the entrance to the exit using the teleportation gun and whatever other tools you might have.

The teleportation gun is a pretty great mechanic. When you fire a “bullet” from it, it will travel in a straight horizontal line until it hits a sold object and you’ll instantly appear wherever it lands. The bullet travels pretty fast, and you’ll carry whatever momentum you have going in to the teleportation when you come out on the other side. Jump right before the bullet hits something and you’ll be in mid-jump when you come out. It’s a very clever mechanic that takes a short while to get used to, but makes you feel pretty smart when you use it to solve the puzzles.

Out There Somewhere uses a pixelated art style that feels reminiscent of games from the early 90s, with a great soundtrack to match. It runs great on just about any PC that was made in the last 5 years or so, but it’s not terribly hardware-taxing to begin with. The whole look has a sort of vignetting overlay that adds a bit of style. It wasn’t necessarily needed, but is completely welcome nonetheless.

In my time with the game, I honestly could not come up with anything to complain about. The puzzles are challenging but never feel impossible to figure out to the point of rage-quitting. They’re exactly the type of challenge that I like, where it’s fun, easy and quick to experiment while trying to find the solution. It looks great, runs great, and sounds great. Out There Somewhere? It’s pretty great.

If you’re a fan of 2D platformers or puzzle games I can’t suggest Out There Somewhere enough. I haven’t played a better game yet this year on any platform, let alone a budget indie PC title. You really have no excuses to not buy it. Don’t be surprised to see me mention this game again when it comes time to make up my Best Of 2012 list.