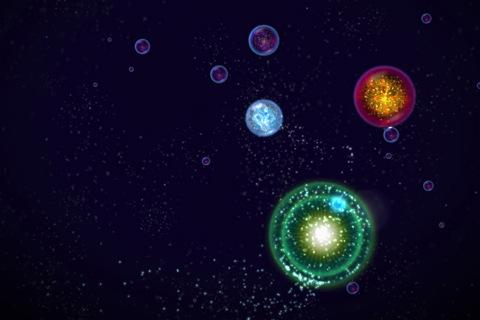 When word first broke that Hemisphere Games was porting Osmos to the iPhone, I was more than a little sceptical. As much as I’m a proponent of mobile gaming, I just couldn’t fathom how something requiring such precision could possibly work on a tiny touch screen. As it turns out, my worries were completely for naught.

Originally appearing on desktops in 2009, Osmos offers up an ambient gaming experience like no other. Players control a “mote” floating through space. This mote will grow if it consumes a smaller mote, and will be consumed if it comes into contact with a larger one. While there are a variety of game modes and objectives, the basic rule of thumb in Osmos is “gluttony rules supreme.” While some levels will task you to eat a specific mote that’s also floating through space, the most common objective is to simply become the largest mote on the board.

What made Osmos wonderfully zen-like, and what we were most worried might be lost in its translation to the iPhone, is the patience that the game demands. To move your mote, you tap behind it to expel mass. The expelled mass propels the mote forward, but it also causes it to shrink in size. This means you can’t simply work yourself into a tapping frenzy to maneuever your mote around the board – you’ll have to study the layout, see where other motes are moving, and try to calculate the direction and force required to get there in as few taps as possible. It’s zen gaming at its finest, but it requires a level of precision that we just weren’t sure a tiny touch screen was capable of. We’re delighted to say that our fears were unfounded.

Tapping behind the mote manages to be just as precise as clicking with a mouse, and if anything it feels slightly more natural. Osmos makes great use of the touch screen in a number of ways. Zooming in and out, an absolute must in a game like Osmos, uses the standard pinch-and-zoom mechanic that iPhone users have grown accustomed to. Speeding up and slowing down time, a tactic that lends a necessary amount of control over the game, is done by swiping your finger your finger left and right. Slowly dragging your finger will make time control even more precise. Even bringing up the pause menu takes advantage of touch screen capabilities, using a three-finger tap that helps keep the screen clear of unnecessary clutter.

Unlike the desktop versions, Osmos for the iPhone is divided into two main modes: Odyssey and Arcade. Odyssey provides players a 27-level campaign that will let them experience all of the variety that Osmos has to offer. Arcade, on the other hand, takes that variety and breaks it down into 8 distinct subcategories, each with 9 levels. In total, that brings the offering to a whopping 72 levels. That’s nearly double the 47 levels that were included in the original Osmos.

Still, that’s not to say this version is superior to the desktop build in every way. Some features, like the ability to randomize levels, have been relegated solely to the Arcade Mode – a real shame when you encounter a particularly difficult level in Odyssey and just want to hit the reset button on the task at hand. The good news is that this specific situation is unlikely to happen… but it’s also the bad news. Osmos‘ difficulty has been nerfed quite a bit in this portable version, and while still challenging, there aren’t really any levels in the main campaign that will leave you stumped for very long. The Arcade mode manages to throw a few zingers your way, but still, blisteringly difficult levels are really nowhere to be found. 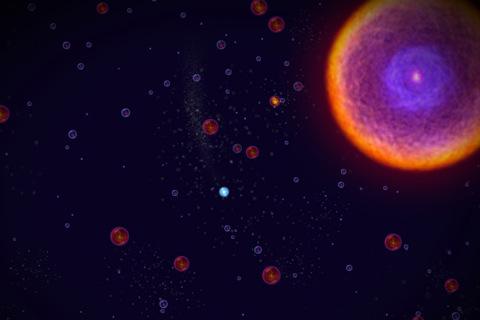 Eagle-eyed iPad owners may already recognize the name Osmos thanks to an earlier July release on Apple’s larger device. Sadly, Hemisphere Games hasn’t gone the route of “universal app,” meaning if you want to play it on both your big and little screen you’ll need to buy the game twice. It’s a shame, as the iPad version doesn’t offer anything different from the iPhone version save for the larger screen. It’s hard to argue one version over the other. Both play brilliantly, so no matter which version of Osmos you pick up, you’re bound to be satisfied.

Nerfed difficulty aside, our only real complaint about the portable version of Osmos is that there isn’t more of it. 72 levels is a sizable offering, but when an experience is this good it’s hard to not be left wanting more. We’ll be keeping our fingers crossed in the hopes that Hemisphere Games decides to offer more levels, either as a free content update or in-app purchase. Even if they don’t, we’ll be happy to keep randomizing the Arcade levels over and over until we’ve worn grooves into our touch screens.

Whether you’re a veteran of the desktop version or a first-timer, Osmos should absolutely be your next iPhone purchase. An outstanding indie gem in its own right, Osmos for the iPhone manages to flawlessly capture the spirit of the desktop version while incorporating the comfort of touch controls and portable gameplay. This is an outstanding adaptation of an outstanding game, with enough unique content to satisfy fans of the original who thought they’d seen everything the game had to offer. Buy it.