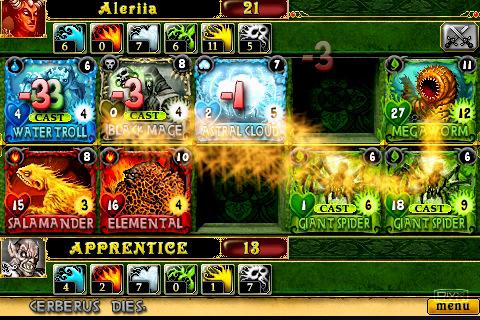 Orions 2 offers a unique CCG experience, but there are simply better options out there

In Orions 2 you play as a “Deckmaster,” cue ohhs and ahhs, that roams the lands defeating other deckmasters using a deck of cards. Sure it’s a goofy premise, and at the same time derivative, because we’ve been down this road many a time before. You’ll travel around, challenge guys to battles, and win XP and cards when you’re victorious.

The game takes place in an overworld where you move from location to location, trying to secure and hold more territory than the big baddie that’s attempting to do the same thing to you. In a nice twist you can choose the size of the map, and the maps themselves are randomly generated, meaning new games never play out the same as the others you’ve played.

This is first and foremost a deck fighting game, so in the end it’s the deck that matters most. Here your deck is separated into different elemental powers like Fire, Water, Air, etc. and each section has different kinds of cards that utilize that power. Some are monsters to summon to fight for you, others offensive and defensive spells and other abilities that take advantage of each theme.

The fights play out on a two row grid that’s five spaces wide. You and your opponent will place cards on your row of five spaces, and will largely attack the card placed opposite it. I say largely because there are abilities that enable you to affect other cards, but mainly you’ll be dealing with cards in a head to head type of scenario.

Each element at your disposal also has a certain amount of power attached to it, which works similar to mana in Magic: The Gathering. It’s a representation of how much you can draw from that particular element. These numbers can rise and fall over the course of the duel as well. Each card has a casting power on it, and as long as you’ve got the necessary power in the element, you can play the card in one of the five spots in front of you.

Once you’ve played one card, you can use the abilities of your other played cards or end you turn, which triggers an attack from each of your cards on the card in front of them. If there isn’t an opposing card in front of a particular card, then it moves to attack the caster whose energy you need to deplete in order to win the match. Cards you play this turn aren’t eligible to take actions or attack because of summon sickness, unless a special ability lets it negate this. 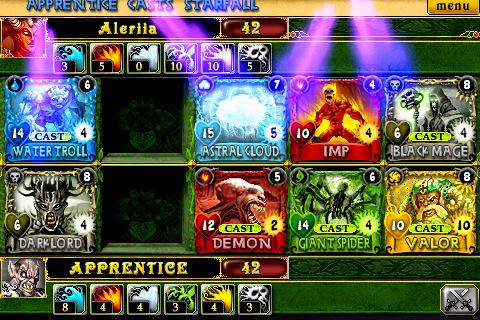 So it plays out like many other collectible card games that we’ve seen, except you collect all the cards in game and you don’t have to buy any more through the App Store or anything. Personally I found the card art a bit lacking in the “wow” department. It certainly conveyed what it was, be it leviathan or satyr, but just didn’t leave any kind of great impression on me.

The battle system is different than many of the other CCG games I’ve played on the iPhone, most notably Shadow Era, which sticks pretty close to the Magic: The Gathering formula. Sadly though, I have to say I preferred Shadow Era in just about every way possible, from the art right down to the gameplay. It also doesn’t hurt that Shadow Era is native to both iPhone and iPad (and browser actually), whereas Orions 2 is an iPhone game exclusively. That’s a shame, because it would be a better fit on the iPad on account of the amount of stuff going on onscreen.

I did enjoy my time with Orions 2, it’s by no means a bad game. The battle mechanics are different that other similar genre games I’ve played, and it’s also nice to have to learn to adapt to a new system. It’s just that there was this nagging feeling in the back of my head while playing that there are better options out there.

Emma and the Inventor Review