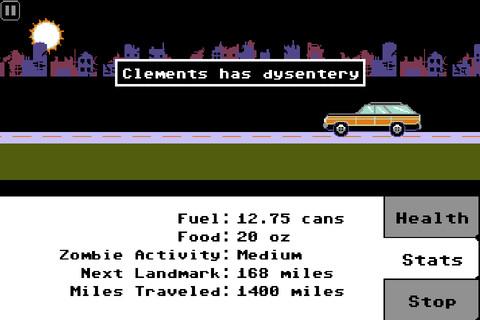 If the zombies don’t get you, the dysentery will

I was obsessed with video games in my youth. As such, school oftentimes felt like a cruel way for society to keep me away from them for massive chunks of time. But when we started playing Oregon Trail in one of my classes, that all changed. It wasn’t exactly the kind of game I was used to, but I still became addicted. Recognizing a dearth of modern games that have the same feel, developer The Men Who Wear Many Hats has delivered us a modern, zombified version of it with Organ Trail: Director’s Cut.

Within a few minutes of firing up Organ Trail: Director’s Cut, the man driving the station wagon I was in broke his arm. And contracted dysentery. And became a zombie. An ominous start to a journey, if ever there were one. But I kept my chin up, and ultimately we reached our first destination. Upon arriving, we were informed that a nuclear strike was about to hit. Okay, I thought, This game is downright brutal.

And I was right: Organ Trail: Director’s Cut is one of the most unforgiving mobile games I’ve ever played. It’s hardly a surprise, given that it was inspired by the also-hard Oregon Trail, a game I only managed to complete about 10% of the time. Both games share a similar goal: Safely get from point A to point B. In the case of Organ Trail: Director’s Cut, you need to make your way to west coast where, ostensibly, the zombie outbreak is less of an issue.

But the journey there is plagued by illness and supply deficiencies, the latter of which is probably the most dangerous. You can load up with a finite amount of items before you begin your trip – a la Oregon Trail – but it’s impossible to start off with everything you need to survive the situation. This is where much of the game’s difficulty stems from. If you spend too much money on bullets and car scraps, you won’t be able to purchase similarly vital items like first aid kits.

The driving portions of the game are automatic, though you can stop at any time to rest up or tend to your vehicle and passengers. You’ll also encounter a lot of dangers on the road, such as random illness and questionable situations. It’s possible – and, quite honestly, very likely – that you’ll find yourself without food or with a busted station wagon while in-between cities. When this happens, it’s time to scavenge. 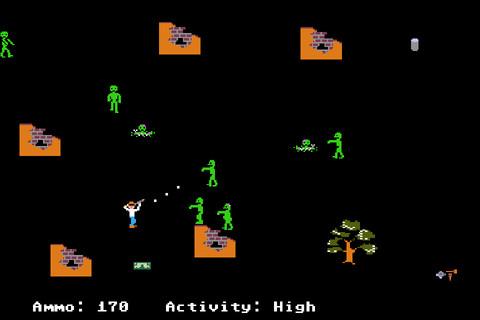 The movement and shooting in the scavenging and combat sequences are the weakest part of the game. To fire at a zombie, you have to slide your finger backwards, take aim, and lift to fire. To move, you have to tap on the screen in the direction you’d like your character to head. If you’re trying to reach an item on the edge of the screen, it’s possible you’ll be blindsided by a zombie hiding under your finger.

In the grand scheme of things, the awkward controls in those situations aren’t that big of a deal. They’re a fairly minor part of the game, and they get easier to deal with when you’ve played enough. It also helps that every other aspect is so darn solid and affecting. If you manage to play this game without finding yourself stressed or nervous about the safety of the passengers in your station wagon, there’s a distinct chance that you have no heart. Or that you’re a zombie, I guess.

On paper, adding zombies to the Oregon Trail formula sounds like nothing short of a hollow gimmick. But Organ Trail: Director’s Cut has managed to turn the concept into something that’s both enjoyable and downright addictive. It’s an absurdly hard, unforgiving game, but that’s a big part of what makes it so fun. Sure, you’ll lose a lot of your team to illnesses and injuries, and some of them will end up becoming zombies, but why not roll the dice and play again?