Order Up!! To Go Review 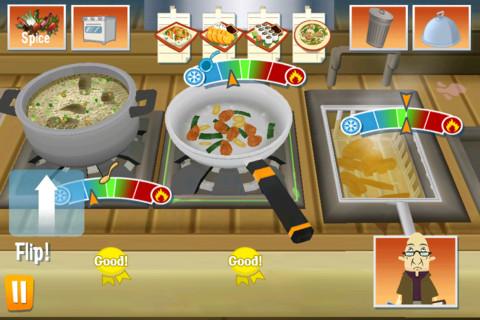 Order Up!! To Go needs a bit more time in the kitchen

There is something quite off by using your free time from work, school and responsibilities to play a style of game that lavishes more responsibilities at your feet. But that’s exactly what you’re in for when you play Order Up!! To Go, Chillingo’s functional, but not overly fun entry to the restaurant management/cooking game genre.

The game starts out with you learning the ropes of cooking at a local fast food joint. The introduction is voiced by a squeaky-voiced restaurant manager teaching you how to cook a hamburger and fries. Most of the actions are pretty basic: tapping the screen, or using your finger to slice or stir, for example. From there, the game comes down your ability to understand the amount of time it takes certain items to cook and your ability to multi-task between slicing a tomato and watching the grill or fryer. Typically you only have to juggle a few orders at a time, so it is not terribly difficult to manage.

Additionally, you have to plan out how you will stock your restaurant. Each day will have a set amount of guests and you will have to consider purchasing enough of certain popular dishes so you don’t run out. Run out of a certain dish and you will have displeased customers eating a “back-up” food (that will always be in stock) like macaroni and cheese (which, personally, sounds delicious to me!) that does not yield much in the way of money or repeat business.

Players are rated on “Yarp”, a word-play on the real-world review site Yelp, based on a number of factors such as taste, selection, speed, cleanliness and so on. As you work at one restaurant longer, the money that you receive by serving customers will help you pay for cleaning your restaurant and purchasing more in-demand dishes that will have customers herding in for your food.

The problem with set-up is all a matter of time—it takes a bit of time to get new dishes, in addition to the responsibility of keeping the restaurant clean and purchasing spices to fulfill special orders. If this process was a bit faster, you would feel a greater sense of progression rather than a feeling of dread of making another order of the same dish that you have made what feels like thousands of times.

As a freemium game, you can purchase your way to new content instead of playing the game proper, which the game’s stinginess with doling out silver coins definitely may encourage you to do. By purchasing gold coins, you can unlock everything from restaurants to spices. Thankfully, I did not come across anything in the game that could not be purchased with silver coins—just be prepared to put in the work to get them. Also, be prepared to be bombarded with advertisements. As a free game, I understand the necessity for advertisements, but you will see one after nearly every loading screen.

Order Up!! To Go is not a bad game. Everything in the game works from a functional standpoint, but could have used a little bit more cooking in planning out player progression. I should not be doing the same task after hours of gameplay. I’m hoping that in future updates Chillingo will tweak the game slightly and add new features as time goes on, but in its current form this game is hard to recommend.