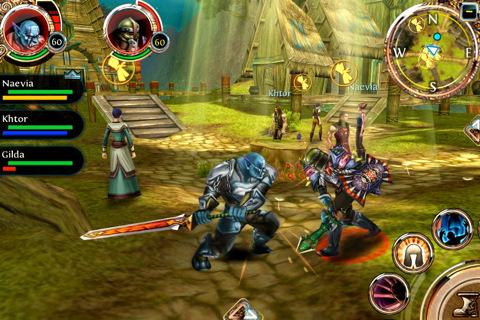 After seeing the teaser trailer put out by Gameloft last month, Order & Chaos Online quickly fell into the “too good to be true” category. That is, until we played it. The trailer promised an MMORPG experience that took everything we loved about World of Warcraft and stuck it onto an iPhone. Not only did it deliver on that promise, but it took us the better part of a week for us to pick our jaws up off the floor long enough to write this review.

Order & Chaos Online does what the majority of us had previously thought was impossible: it delivers an MMO experience on iOS devices that’s as deep, as rich, and as satisfying as any PC MMO out there. In 589MB, Gameloft has put together a game that might have taken some PC developers 15 gigs to accomplish. To call this release anything short of monumental really sells short what a landmark moment this really is.

As I usually do in my MMO experiences, I chose to start the game as a Warrior (though players also have the option of choosing a Mage, Ranger, or Monk). The game offers plenty of pop-up tips for MMO newbies, though veterans of the genre will feel right at home with what Order & Chaos Online has to offer (World of Warcraft veterans will feel more at home than most).

Like most MMO’s, the game largely centers around collecting and completing quests. As you do you’ll engage in combat, earn experience, and spend talent points to customize your character in any way you want. Since I tend to play solo more than in groups (a strange trait for an MMO gamer, I know) I’ve been putting most of my talent points into Warrior skills that will deliver big damage and cover my own butt. If I were a more social gamer, I could have selected from a variety of skills that would be of a big benefit in group play. Like any good MMO, Order & Chaos is all about tweaking the character to my play style rather than the other way around.

One of the biggest challenges in bringing a PC-style MMO to a portable device is handling all of the menus and commands. When you have as much real estate as you do on a PC monitor, it’s easy to line up 20 or so icons that represent different attacks and spells to be clicked on – but on a 3.5 inch touch screen? That gets a little tough. Fortunately Gameloft have proven themselves the kings of making tricky control transitions to touch screens work.

Controls feel natural and intuitive, and very little has been sacrificed in the jump from PC to touch screen. Movement is controlled by pressing your left thumb anywhere on the screen, and the camera is controlled by doing the same thing on the right. You can assign all of your spells/attacks to a wheel in the right hand corner of the screen, which is both quick and simple to navigate in the heat of battle. Additional spells and items can be stored in a special pop-out menu by tapping a tiny arrow on the right side of the screen. Inventory, character stats, social elements, and every other menu you can think of can be brought up by tapping on your character portrait. They’ve even incorporated an auto-run feature – this game literally has everything you could want in a portable MMO.

Order & Chaos Online is a living breathing world – lag free – populated by real players looking to quest with you, trade with you, and welcome you into their guilds. From combat to crafting, nearly every level of play that you could want in a PC MMO is here, and it fits right in your pocket.

The only real complaint to be had here is lack of originality. It’s not just the general gameplay; everything in Order & Chaos is cut and paste from World of Warcraft – from the cartoony art style to the fact that you don’t get penalized for your death until level 10. Heck – my Warrior’s attacks even mimicked the attacks of a warrior in World of Warcraft with little more than a name change to set them apart.

Everything is copied from WoW, from the biggest elements to the tiniest brush strokes. Moment for moment, this is simply World of Warcraft with a different world to explore, perfectly optimized for the touch screen, and a few elements left on the cutting room floor. As a Warcraft fan, I can honestly say that this lack of originality is more than appreciated. If you’re going to steal, steal from the best. 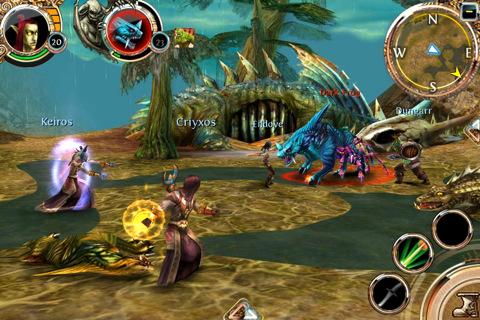 On the flipside though, there will no doubt be some MMO faithful that gripe about the things that don’t appear in Order & Chaos Online. The class and race selection, for example, is limited to only four options right now. Also, there’s no Player vs Player combat (though duelling is allowed). And the servers feel a little overcrowded already, with sometimes a dozen or so people sitting around waiting for the same bad guys to spawn. But these are all things that could (and likely will) be remedied in a future update.

Order & Chaos Online represents a watershed moment in gaming. Sure it’s little more than a flawless imitation of a popular PC game, but it’s a flawless imitation of a popular PC game that nobody would have ever thought could work on a portable device. We’ve gone on for nearly a thousand words here, and we’ve barely scratched the surface of the game. This is utterly majestic, and pushes the bar way beyond what we would have ever thought possible on an iOS device. If you’ve ever considered yourself an MMO gamer, Order & Chaos Online is a must have for your collection.