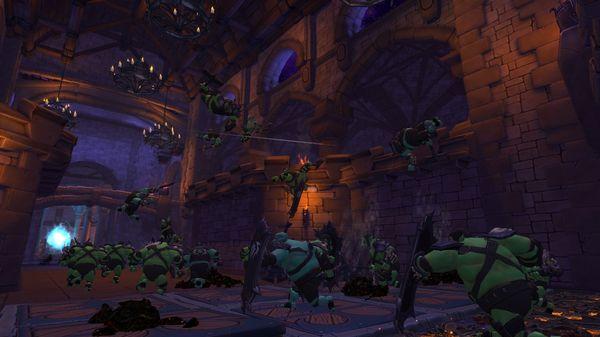 Orcs Must Die! may look like an action game, but it’s actually a clever and refreshing take on tower defense. Yes, you control a hero and battle it out with monsters, but you also lay traps and battle enemies in waves. It’s a game that seamlessly blends two seemingly disparate genres into something unique and fun and very, very bloody.

The title really tells you all you need to know about the game’s premise. You are an apprentice orc killer, and once your master passes on, it falls on you to protect rifts — magical portals that orcs seem very keen on — located in various castles. And along the way you’ll kill lots and lots of orcs. Each level starts out just like virtually every other defense game, albeit via a third person perspective. You’ll have as much time as you need to survey the castle and set a few traps, and then once you’re ready the orcs will break down the door and begin their charge.

In most tower defense games this is the part where you sit back and watch. If enemies make it past your defenses there’s really little you can do. But that’s not the case in Orcs Must Die! Here you’ll be able to wield swords, crossbows, and other weapons to clean up any crafty orcs that make their way through your maze of spiked floors and arrow-shooting walls. You can sit back and pick them off with arrows, or you can run into the horde slashing with your sword. The combination of your own combat skills mixed with the wide array of traps you’ll eventually have access to means that there are many, many different ways to tackle each stage. Orcs will be frozen, impaled, squished, burned, and a whole lot more.

You’ll also have to contend with the level design, which gets trickier as you progress therough the campaign. Enemies will come from multiple entrances and start running down multiple paths and there are even shortcuts. But pretty much every aspect of the environment can be used to your advantage in some way. A shortcut, for instance, might also lead to a nice safe place where you can pick off defenseless orcs with your crossbow.

The controls feel good, and switching between spells and weapons is quick and easy. But by the sheer nature of the third person perspective it’s more difficult to quickly place down traps than it is in a standard tower defense game. Thankfully every few waves the action pauses, giving you as much time as you need to shore up your defenses. The shooting mechanic doesn’t feel as good as in traditional action games, but it gets the job done.

Considering just how much is going on at just about every point in the game, from the charging orcs to the firing weapons and springing traps, it’s impressive just how great the game looks. Even on our relatively modest laptop it ran fine, and still looks good with the settings turned down. It has sort of a cartoony, Pixar vibe, with slightly exagerated character designs and some nice magic special effects. There’s also a lot of blood. Not only do orcs die a lot, but they tend to do so in a gushing blaze of bloody glory. This can be turned off in the settings, however.

On paper Orcs Must Die! is a fairly standard tower defense game, with all the features you’ve come to expect. But by putting you in the battle and changing up the perspective, it creates a whole new, and thoroughly enjoyable, experience. If the orcs must die, you may as well be the one to do it.

The Dark Hills of Cherai: The Regal Scepter Review