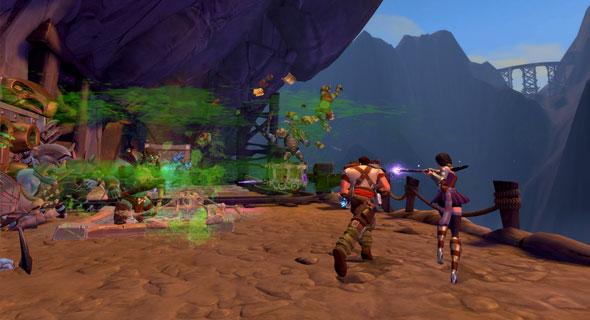 There’s more than one way to skin an orc

The tower defense genre comes in many shapes and sizes, but there’s no denying that last year’s Orcs Must Die! was by far one of the most refreshing twists to the genre in a long time. The brilliant combination of tower defense with third-person action led to an addictive mix of strategy and skill. Less than a year later, Robot Entertainment is back with Orcs Must Die! 2, and everything is bigger. While it’s impossible to recapture the innovation and surprise of the first title, this interactive death trap is just as fun to spring as the original.

The story continues with the War Mage being forced to team up with the Sorceress in order to fight a resurgence of orc forces. It’s the simple tower defense formula we all know and love (stop group A from reaching point B with purchasable structures), but the major twist is being able to simultaneously battle your foes as a singular hero as well. Combined with fully 3D environments, the placement of traps and macro management of raids becomes an incredibly challenging strategic task.

Two is an appropriate add-on for Orcs – the game’s two major additions revolve around having a little company. You now have the choice of character between the headstrong (and brain dumb) War Mage and the long-distance and snippy Sorceress. Both characters are plenty of fun to pilot, and their back and forth banter throughout the single player story campaign is hilarious.

If you’re interested in creating a team that’s a little more dynamic than the bickering story team, you’re now able to join up with your friends and jump into Co-Op games. Shouting back and forth with friends as hundreds of evil forces are pouring onto the battlefield is an experience that fans of the first title could only dream of. Playing through a few Co-Op games myself, I can confirm: it’s as fun as you’ve dreamed. A “Co-Op with strangers” option would still be welcome for the future, though.

Gameplay is as addictive and engrossing as the original, but admittedly, not much as changed altogether. Level design is still intricate, monster types are equal parts beatable and frustrating, and obtaining new platforms and abilities still becomes a frighteningly compulsive habit. Complex combos are as wonderful as ever – actions such as springboarding an unsuspecting orc into a full-speed minecart never get old.

There are so many options for abilities and platforms that it’s daunting. There are dozens of weapons, over fifty individual traps, and over two hundred total upgrades in total for every piece of equipment. Everything is upgradeable via the game’s “skull” currency, but it can be pretty difficult to determine where you want to place your points. Do I want new traps? Should my spikes get the slow down power? Should I increase my lightning’s ability to hit multiple targets? That crossbow looks nice – should I try that? Decisions, decisions. 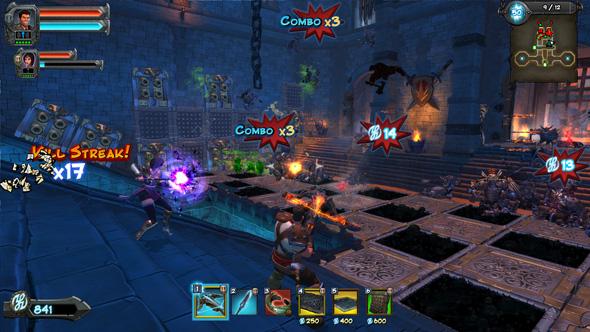 Luckily, the new “Endless” stages provide a great way to accumulate more skulls than ever, quickly fueling your desire to hold the strongest arsenal possible. Combined with the game’s already sizeable mission-based story campaign, there’s a ton of ground to cover.

The Co-Op, endless modes, new items, and new class combined are fantastic additions to the original formula. However, as expected from a sequel less than a year older than the first title, Orcs Must Die! 2 doesn’t offer much in terms of astounding innovation. Then again, it’s not like it had to. With more players, more choices, and way more tools for destruction, Orcs Must Die! 2 is a fantastic tower defense twist that’s just as fun as its predecessor.