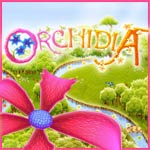 We’ve seen our fair share of falling block games – where items fall from the top of the screen and have to be moved to create matches or rows that clear them from the screen. Orchidia, however, is possibly the first “floating block” game in existence, where objects don’t fall from the screen but are rather carried there on the currents of a river.

After choosing your character – either a girl or boy – from the title screen, the story begins after you accidentally stray into the land of Orchidia, whose magic is slowly being drained. The cause of the destruction is that the central river that runs through Orchidia is being clogged up by strange flowers that float down and create dams which block the water.

As it turns out, if you’re able to match three or more of the same kind of flower together, they disappear, and if you create enough matches, and the entire dam explodes. This isn’t as easy as it sounds, because flowers generally don’t drop one at a time but instead come in clusters of two or three. Using either the mouse or the keyboard, you can rotate the clusters to find the best position before they settle at the bottom of the dam.

Many parts of the river contain additional obstacles, like blocks of ice and lily pads that that flowers have to be steered around. Sometimes small tributaries flow through the main river from either side, depositing extra flowers or debris that isn’t under your control and is free to fall wherever the current takes it. Sometimes items simply float across the river from one side-stream to the other, serving as moving obstacles – features that help to set Orchidia apart from other falling block / match three titles.

As you travel up the river getting rid of one blockage at a time, you’ll be helped by a being named Doriella and your rubber ducky companion, who was somehow brought to life by the magic of Orchidia and is now able to talk and let you know what your objective is at the start of each level. Typically, you’ll either have to clear a certain number of flowers, or match one type of flower a certain number of times within a set time limit. The game is also over if the flowers overflow and touch the top of the screen.

You’ll also occasionally encounter animals that have been trapped in the ice that you can free by matching the flowers that are touching them. Some of the creatures you encounter aren’t so nice, and you’ll have to defeat them by creating enough matches touching them that you deplete their courage and they get scared and go away.

Sometimes you’ll find objects floating in the water, or earn them by creating matches of four or more flowers. These bonuses help you in various ways; for example, the Touch Charm clears all charms it touches, the Row Charm clears all the objects in it whatever row it lands in, and the Rime Charms adds time back onto the clock.

Besides the 60 levels of Adventure Mode, there’s also a non-stop mode called Orchidia Eternal where the goal is to match as many flowers as you can before they clog up the screen.

Bright and colorful graphics, enjoyable audio and the odd snippet of real live voices incorporated into the sound effects round out a pleasant fantasy-themed package. There’s nothing terribly new here, although the river is an interesting play on a familiar theme, and the vibe is a pleasant one. These factors combined make Orchidia worth a look for match-three fans.