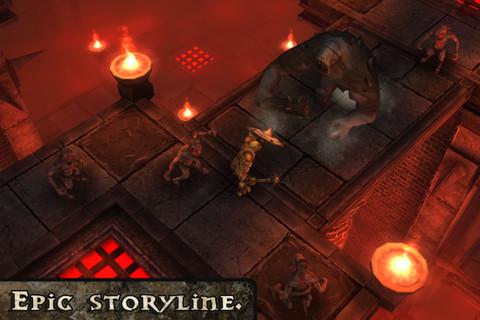 This past Christmas I got myself an iPad.  For years I had been listening to podcasts in which video game luminaries spoke praises of the mobile device.  I understood the iPad to be some sort of ice breaker crunching its way through frozen waters, forging a veritable northwest passage through the calcified husk of popular gaming.  When I finally got my hands on one, I wouldn’t say I was disappointed.  I enjoyed a solid month of new games, sampling different genres and exploring the platform’s departures from the norm.  I wouldn’t say I was blown away either, though.

For the most part the games I played were decent.  I found myself searching out iOS examples of my favorite genres, to see how they differed on the touchscreen.  Some genres delivered, some didn’t.  One particular itch I wasn’t able to scratch was the action RPG (maybe I didn’t look hard enough).  I found a few fun examples, but none that were able to deliver a thrill on the caliber of one of my all time favorites, Diablo.

Before I go on, I just want to say that Diablo III has snared me in a way that no game has for quite some time.  I’ve logged over 80 hours of playtime with a handful of characters… to other fans of the series this may not be very much time at all, but it’s a lot for me.

What am I trying to say by telling you how hours I’ve spent playing Diablo III?  Beside the therapeutic benefits of confessing to the public that I spend too many hours playing games, I’m trying to instill some confidence that I know a thing or two about action RPGs.  That said, ORC: Vengeance is a damned fine game — easily the best action RPG I’ve had the pleasure of playing on my iPad.

The first thing it does right — and most importantly as far as I’m concerned — is loot.  An action RPG is nothing without the slot machine rush of finding that next axe, or equipping that next shield.  Like most action RPGs, ORC’s focus is killing endless waves of bad guys.  Skeletons, goblins, and the usual cast of zombies all throw themselves upon your sword, and when they do they burst forth with gold and items like pinatas do with candy.  Sifting through those items for improvements over the weapons and armor in your possession is the most satisfying aspect of ORC.  And when those items aren’t an improvement, that’s what the vendor is for.  Sell them and buy yourself something nice.

ORC’s story is somewhat typical of the fantasy real estate that action RPGS usually reside.  It is your task to defend a mythical land against the forces of a mythical evil named the Dark One.  Though this vile villain may be stereotypical at best, ORC does differentiate itself from the pack by switching up the role of protagonist.  Instead of playing the usual human hero, you are an orcish war chief.  Argon, the world this hero inhabits, was once ruled by humans, but their hubris has led to both their destruction and the ascension of the evil Dark One.  While playing as an orc is a fun twist, I would have liked to spend more time killing humans.  Casting an orc as the hero could have lead to a more interesting storyline than one that deals with stock baddies like skeletons and the undead.

Despite the run of the mill story, ORC stays fun by way of its combat.  While the main mechanic of the action RPG remains unchanged — tap ad infinitum to attack baddies — a fairly deep, gesture based skill system keeps this action from getting boring.  As you progress through the game, new skills are unlocked by finding special chests.  Once these skills are unlocked, they can be assigned to one of four different skill slots.  One slot is activated by a double tap on the screen, another by a swipe, another by a circle, and another by a zig-zag. 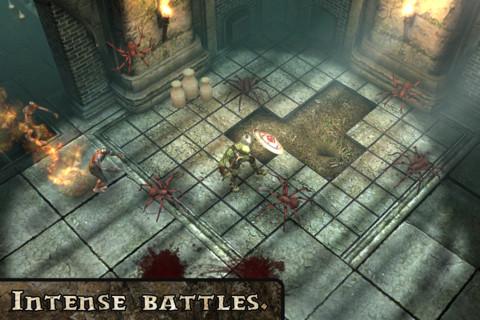 Some skills are a perfect fit for these gestures.  I chose to assign my dash attack to the swipe.  Others are not so natural.  Health and other potions must also be assigned to skill slots.  Having to draw a zig-zag on my screen to heal lead to some awkward maneuvers on the part of my orcish hero — sometimes resulting in otherwise avoidable deaths.  Dedicated health/mana/armor potion buttons on screen would have gone a long way — making their functions more accessible while also freeing up gestures for combat skills.

While there is some sense of exploration, ORC’s combat mostly revolves around arena-like set pieces.  Once you make your way to a certain point in a stage, exits will be blocked off and waves of enemies will spawn until they are all dispatched.  This works well for the most part, but I got the feeling some of these confrontations were lengthier than they needed to be; that they were an attempt to squeeze some more playtime out of an otherwise short game.

Despite its few deficiencies, ORC: Vengeance is a great game.  Controls are solid, story/ambiance is no worse than its competitors, and the graphics are top notch.  I was continually impressed by the draw distance, and at no point did my first generation iPad experience any slowdown (Editor’s Note: we’ve had a similarly positive experience on the iPhone 4).  And what’s more, I had fun too.  ORC is the action RPG I went looking for when I first got my iPad.