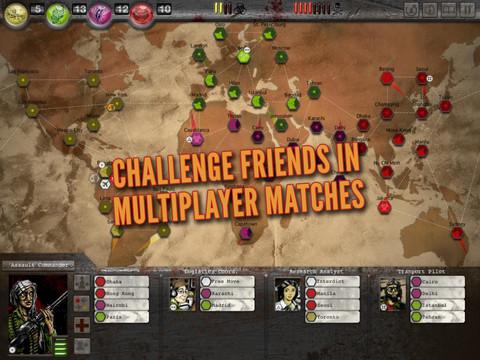 Operation: Eradicate is a near perfect copy of Matt Leacock’s Pandemic… but with zombies!

The zombie horde is at it again. Shuffle, mumble, braiiiiiins, munch. Rinse and repeat, you know the drill. In Operation: Eradicate your task is to overcome the zombie hordes and get the disease under control before a tipping point is reached and the population of the entire world is devoured. To do this you’ll assemble a 2 to 4 person team that will work together to move around the planet, fighting back the infected while trying to find a cure to the disease.

The whole thing is laid out much like a board game, with the board in this case representing a map of the world. Cities around the map are marked as places of interest, and separated into four “zones,” each with their own color that you’ll need to gain control of to win the game. For example, the Americas are yellow, while Asia is red.

Each member of your team takes on a different role, ranging from things like pilot to soldier, which gives them unique abilities in fighting back the infected and finding a cure. Each turn one of your characters can take up to four actions from a list of choices like moving to a different city, killing off some zombies in your current location, trading resources with a teammate, etc.

At the end of each turn, more cities are infected with the zombie outbreak or already under siege cities go from bad to worse. Each city can have up to 3 levels infestation in them at a time. If a city already has 3 infection counters against it and gets infected again, an outbreak occurs and it jumps to adjacent cities. In addition to this being hard to get on top of, if this happens too many times the game is over. So it’s key to make sure no cities are ever full and in danger of spreading outside its borders.

While moving around and trying to get ahead of this thing you’ll collect various resource cards that have a color code and the name of a city on them. You can use these cards to fly that character directly to the city listed or try and collect a few like colored cards instead, through drawing and trading them with teammates. Get enough like-colored cards and you can “cure” that zone of the disease and not worry about any more outbreaks. Cure all 4 zones and you’ll win the game!

The constant threat of disease expansion and having precious few actions on your turn keep the game tense the entire way through. Every time you lull yourself into thinking you’re safe, the worst possible cities get infected and start a domino effect that changes everything. This constant spectre of failure dangles over you like the Sword of Damocles, always serving to keep you on your toes. It works, and seems to keep every game compelling. 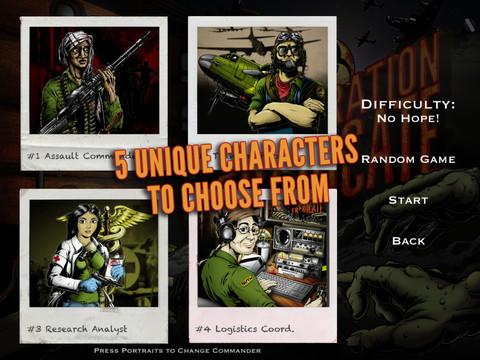 The big downside of the game is that there’s simply a ton going on onscreen at any one time, all represented by little icons surrounding the city names. I think it’d be extremely difficult to play on the smaller iPod screen, as even playing on the iPad sometimes wasn’t easy. The icons help communicate the information needed well, it’s just that sometimes it feels a bit small.

If you’re a board game fan, like I am, this all might sound a little familiar. You’re not mistaken. It became clear pretty early into my first game that Operation: Eradicate took pretty heavy inspiration from the popular co-op board game Pandemic, where you move around the world to cure diseases. The longer I played the more similarities I found, and my feelings went from “hey this is sort of like that” to “huh, this is pretty much exactly the same game with a different theme pasted on.”

In fact there are precious few differences between Operation: Eradicate and Pandemic, and the changes that are there are minor at the absolute best. As a big fan of Pandemic that meant that I really enjoyed playing Operation: Eradicate, since Pandemic is such a great game. But in the back of my head I just couldn’t shake the feeling that this is such a close copy that it might tread into copyright territory.

That’s a conversation that’ll happen above my pay grade if that’s the case. I can’t help but knock the score down a bit because of it though – it’s just too closely related. But until Z-Man Games releases an official Pandemic port for iOS, I’ll be happy to use Operation: Eradicate to get my co-op disease curing fix.

Behind the Reflection 2: Witch’s Revenge Review