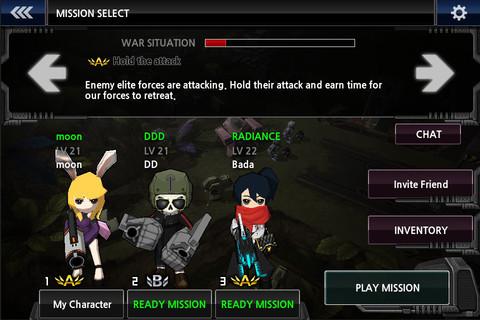 This online RPG might leave you a little cross

Imagine, if you will, a Diablo game set with a sci-fi world, available on mobile devices worldwide. It’s also free-to-play. Now before you start drooling to the point of flooding your home (like I did), let me bring you back down to earth: this is what Operation CrossCounter looked like at first glance.

The concept is pretty simple: you control a custom-made anime-style space hero equipped with the cyber weapon of your choice. Swords, hammers, rifles, and rocket launchers make up just a portion of all the attractive options at your disposal. After setting up your gear, you’re free to explore missions and protect humanity against an evil AI onslaught.

At least that’s what you should be able to do.

Of all the things that CrossCounter decided to take from Diablo, it was the form of always-online gameplay. And just like the fatal Error 37 bug, I couldn’t get my game to run half the time I wanted to play it. Strangely enough, the game allows you to enter missions with AI partners if you can’t get any other characters in your lobby, but it still doesn’t let you play offline in any manner.

In addition, the game’s in-app currency function was broken at the time of writing as well. You can still do the old-school “download this or that app in order to make a few cents” method, but I never felt the need: the game offers you a decent amount of free currency to start, at least allowing you to customize a few things before your first time in the field.

The missions themselves, when actually working, are fun, but underwhelming. You and two other companions (human or AI) cooperate to complete a few randomized mundane tasks, such as capturing an outpost, escorting a convoy, or destroying all enemies. Each mission only takes around three to five minutes to complete before jumping you back into the game’s lobby.

The real shame here is that the game could be addicting if it offered large, complete environments instead. Even at its scaled down size, there’s something about whacking machines around with my spinning hammer that made me want to blow as much up as I could. Each weapon comes with just one attack and two abilities, but that still didn’t stop my desire for non-stop destruction. 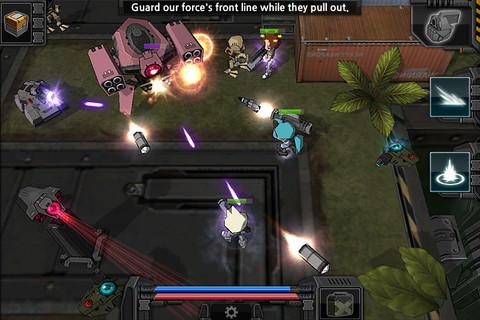 After each mission, you’ll gather experience, currency, and the occasional item. Unfortunately, there isn’t a tutorial that explains anything about allocating your points or cash. I spent hours of the game thinking I had spent all of my reward points, only to find out much later that there are three separate tabs of upgrades to sift through each time you level up. There’s plenty of depth once you get a grasp of everything, but the sloppy menu system makes it pretty hard to learn.

In the end, Operation CrossCounter is a game that I want to enjoy, but simply couldn’t get into. I wanted dungeon-like areas to explore instead of tiny missions. I wanted upgrades and loot in a system that was easy to understand. And I also wanted to be able to play consistently without having connection problems. CrossCounter represents a clear opportunity for an online isometric RPG experience on iOS, but the genre still has plenty of obstacles to climb before it can become a genre I’d truly recommend on handheld devices.