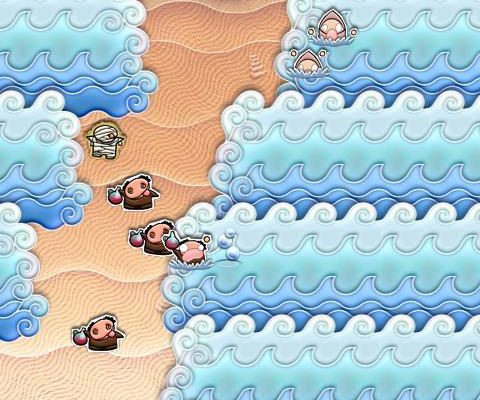 Open Sea! is fun to play, though its content is far shallower than a certain sea that once parted down its middle.

And lo did they come to a great sea that blocked their flight from wickedness; but with a swipe of his holy finger did the waves part, and his people – young and old, hale and infirm, drunkard, slothful and really kind of all-around annoying – continued their exodus, untouched by the drowning waters. And it was good. And good fun!

Open Sea! is a cute little game with a simple premise: your people need to get from one side of a great body of water to the other and you have the power to part the waves with just a single swipe of your finger. Sound familiar? It probably should, especially since many of the “characters” in the game sport long hair, flowing bears, robes and shepherd’s crooks, and they’re being pursued by wild-eyed mummies and ancient Egyptian warships. Oh, and the man who would lead them to freedom? His name is Mo.

It isn’t exactly subtle with the religious themes and people with a serious sensitivity to such things might be a little put off by it, but biblical imagery notwithstanding, Open Sea! is about as inoffensive a game as you’re going to find. Characters are tiny and cartoonish, somewhat Lemmings-like in both appearance and behavior, which means that they’ll happily walk into the sea and drown if you don’t part it exactly where they’re walking. It sounds pretty simple and it is, as long as everyone is moving in a nice, orderly line, but that stops happening at around the third of the game’s 50-plus levels. After that, it starts to get ugly.

A lot of the people you seek to set free are kind of jerks, like the drunks who stumble from side to side, challenging you to keep them dry, or the lazy slobs who get tired and decide that the exposed sea bottom is a great place to lie down and take a nap. Some of them get scared and run away at the first sight of water, while others don’t seem to comprehend the seriousness of the situation and move so slowly that even someone with the patience of Job will start to go a little crazy.

Fortunately, you have a few tools at your disposal that will make the task a little easier. You can zap the pursuing mummies [and give your people some incentive to hustle it up] with lightning bolts that can be called down from the sky, and saving “heroes” like Abe and Nono will grant temporary powers that makes the job of saving them a lot easier. You’ll need all the help you can get, because by the midway point of the game you’ll be swiping and poking frantically as you struggle to give your people a path to follow, keep them moving and protect them from their enemies. 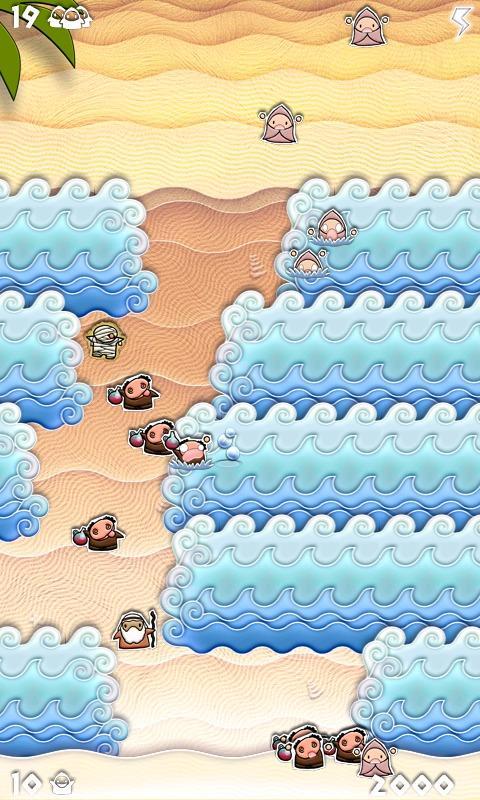 But while the difficulty ramps up, the basic gameplay never changes, and that’s a bit of a knock against it. Open Sea! does all it can to keep things interesting, with a lovely level-select map, special challenges, Scoreloop leaderboards and more, but you’re doing essentially the same thing with every new level. The shortness of each individual level helps camouflage the repetition – the action is fast and furious, with each round won or lost in under a minute – but players looking for a deep and varied experience will probably get bored fairly quickly.

On the other hand, those who do find themselves hooked will have a lot to do. There’s a pile of levels to play [with more promised for the future], each one scored with one to three stars, and at certain points in the game you’ll need to have a sufficient number of stars to proceed; fall short and you’ll have to go back and do better on some of the maps you’ve already beaten. And once you’ve beaten them all, five “challenge modes,” like “Crossing of the Dead,” “Save ‘Em All” and “Time Trial Extreme” await your attention.

Open Sea! isn’t the most complex game ever but it’s great for smash-and-grab gaming, something you can squeeze in when you have a few minutes to kill while waiting for something more important to happen. It’s cute, it’s simple and it’s fun, and if that’s what you’re in the mood for, Open Sea! is definitely worth a look.