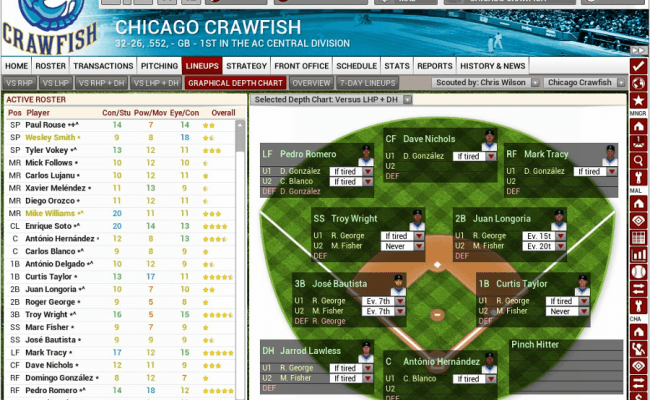 The long-running baseball sim is back and better than ever.

Fans of sports sims can be hard to please. They worship at the altar of realism, demanding it from their games. Oh, and they’d prefer those games to have nice interfaces, include tons of options and still be fun to play too. If it sounds like a daunting task to satisfy them, you wouldn’t know it from OOTP 14. The long-running PC baseball sim steps up to the plate and does all of the above, making it look easy in the process.

For those new to the series, let’s begin with what OOTP 14 (that stands for Out of the Park, by the way) is not. It isn’t a game that requires quick reflexes or boasts flashy graphics, since it’s a text-based sim. It also lacks an official Major League Baseball license, though as you’ll see, this isn’t the handicap it may sound like.

No doubt fans would argue that none of those things are necessary, since their absence allows the game to focus on being the best way to recreate baseball on your PC. And by that I mean simulating the sport in historical fashion using real baseball players from every era, projecting the future by using the 2013 teams and rosters as a starting point, and even dreaming up leagues full of fictional players that end up with their own unique histories. 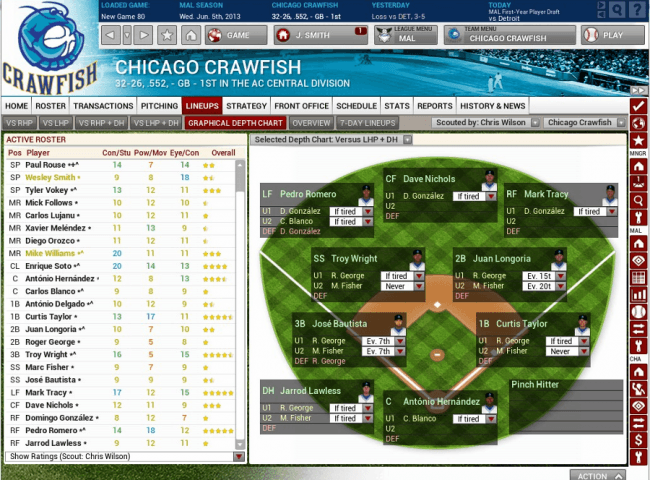 The main menu makes it possible to start any of these kinds of leagues, though the focus is on major league seasons with the current real-life rosters or historical replays. For the latter, you can pick any season from 1871 to 2012, with the game accurately reflecting the realities of the sport at that time. Historical leagues can be set to sim a single season or roll from one year to the next in career mode. Furthermore, you have the option for the league to mimic real life in terms of transactions and player movement or to spin off into more of an alternate universe where what happens is a “What if?” scenario. Either way, you can load the history of the real majors up to the point in time where you begin.

If you fancy yourself a more advanced user, you’ll find a plethora of tools to set up exactly the league you envision. League names, number of teams, minor league organizational structures, and financial systems are all parameters that can be tinkered with, meaning that no matter how unique your idea, you can probably get the game to make it happen.

Once you’ve got the league creation out of the way, it’s time to get to work as the manager and GM (plus commissioner, if desired) of your favorite team. The amount of control you have is up to you: micro-manage things down to the rookie ball level if you want, leave some issues up to the computer AI if you don’t. The front office lays out its expectations for on-field performance and financial responsibility before each season, and unless you turn the option off, you can be fired for poor performance. Manage like you mean it! 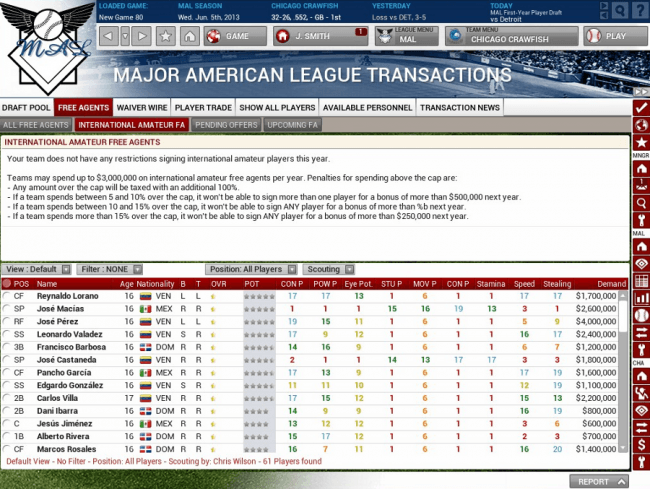 Within the season, you can simulate or manage each game on the schedule, skip to certain parts of the season or just zip through an entire campaign as you see fit. The AI will act as caretaker for anything sim-based on the strategy parameters and roster roles you dictate, and you can have the game drop out of fast sim mode for certain events – like if your star pitcher tears a shoulder muscle and you need to make a move. Any non-human controlled teams are also managed by the AI, which has been smartened up this year with more intelligent in-game and roster management algorithms. Player development is also more robust than ever, from the generation of new young talent both at home and abroad, to the way athletes’ fielding ratings are affected as they get older.

All of the options are organized smartly in an interface with drop down menus for the Game, Manager, League and Team menus at the top and buttons to jump to more specific functions on the right-hand side. One thing you’ll certainly appreciate, especially as a beginner, is the way the game notifies you of important dates and duties to help ensure you don’t skip anything too vital.

Assuming you want to get your hands dirty with managing the action on the diamond, you’ll find an in-game experience that is similar to that from previous years, but with some new additions as well. Games unfold either by the at-bat or by the pitch, and any kind of strategic option you could want is only a button press or two away. The play-by-play text box has even more personality, and there’s a new webcast mode that is especially fun to use in an anachronistic way when simulating seasons from the 19th Century.  Stats? Oh my yes, all the stats you can handle are here, including things like estimated win percentage based on the current game situation. 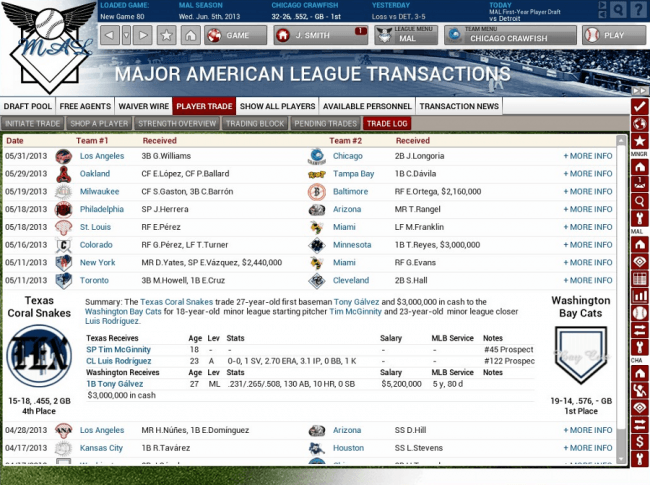 Perhaps the most enticing part of the way OOTP 14 works its magic is the way it makes each season have its own personality, feeding you storylines, news and more to connect the dots between the individual games. Other league games can be simmed in the background while you play your game, making them feel like they’re actually happening at the same time. The game-generated portraits for players age and change over time and switch caps when the players change teams. These are small but important facets that help the game feel like much more than an exercise with numbers.

The only missing flavor might be the aforementioned lack of MLB logos and stadiums, but these can be added after the fact with the help of the loyal OOTP modder community. The Add-On Central tab on the main menu screen provides a simple portal to the best user-generated content, most notably an “All in One” pack that can give you current team logos and caps in a single file. It’s still a little effort to download and install the extra goodies though, and some things, like stadium backgrounds for the in-game background, don’t always seem to mesh well with the existing graphical elements.

If that’s the worst criticism Out Of The Park Developments gets for its annual love letter to baseball, it’s doing pretty well. All that’s required for the best baseball simulation around is a computer and a little bit of imagination, because OOTP 14 does all the rest.

Trial of the Clone Review