Home / Reviews / Once Upon An Apocalypse Review 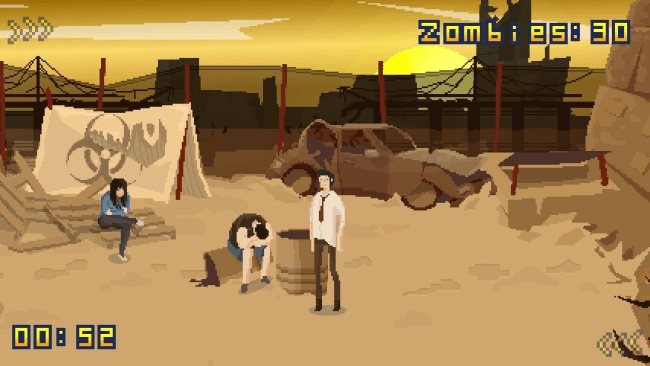 There’s a real helplessness to the entire ordeal that is Once Upon An Apocalypse. It’s the sort of feeling that you might hope to expect from a game that bears such a title, but the bleakness isn’t really of an end-of-the-worldly nature – rather, this is a moody, all-hope-is-lost experience simply because it never really feels like you’re given the appropriate tools to survive.

Oh, there is a way to survive Once Upon An Apocalypse with all your camp-mates intact, make no mistake – but it all feels so random and closed in that making any sense out of your actions is essentially a case of repeating the game over and over again in a trial-and-error fashion. This is an adventure game, then, which is less adventure, and more touching random things until the helicopter comes to take you away. 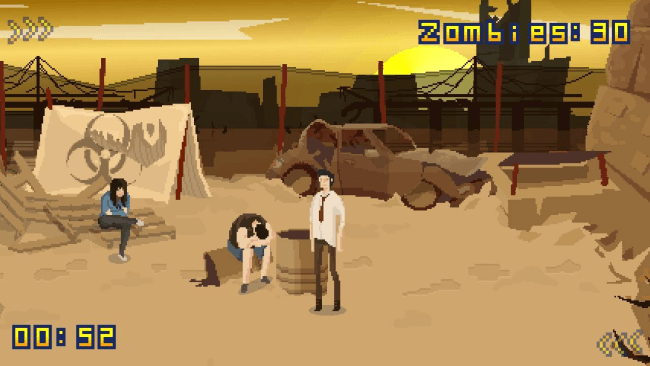 It’s all about zombies, of course – the undead who have ravaged the land and eaten anyone in their path. You are “Skinny,” a ruffled man in a shirt and tie who is just one of a handful of survivors. You’ve set up camp in a safe-ish spot, and somehow managed to nominate yourself as the leader of the group. No one appears to have a problem with that.

Each day, you’re given the option to talk to the other survivors in the camp, and order them to complete tasks. One person can go out looking for food, while another can hunt for more survivors. There are also people who will keep watch at night, because this is mainly when the zombies strike. As you order people around, the mood (and size) of your posse will change accordingly.

As survivors come and go, you’ll slowly but surely work up to a final conclusion, in which certain people will make it onto the helicopter, and others won’t be so lucky. It’s by experimenting with who to send out and who to keep in the confines of the camp that you find each of the achievements and endings that the game has to offer. 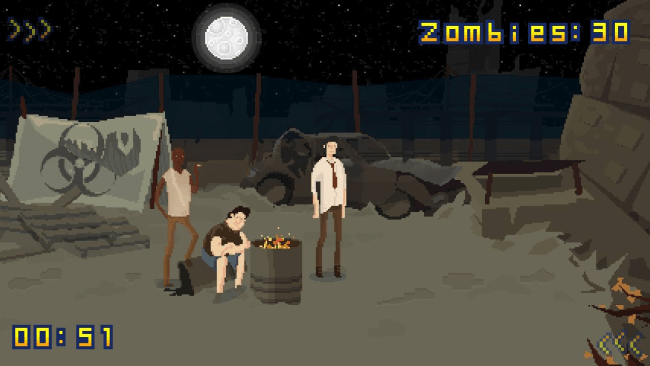 Once Upon An Apocalypse clearly has a great amount of heart and soul put into it. The core concept is definitely there, and the game has lovely pixelated visuals, clearly inspired by games like Superbrothers: Sword & Sworcery EP. It’s a neat idea, too, to have each branching story presented through achievements and separate endings.

But there are so many rough edges around this game that it’s difficult to enjoy it. The terrible English translation, for starters, makes it nigh on impossible to feel anything for these characters. I thought at first that maybe the text was purposely bad, your band of followers all broken-English foreigners trying to communicate the best they can. I quickly realized this was very optimistic of me – it’s simply that the text hasn’t been checked over at all.

The game feels massively fiddly all over and buggy in places. You touch a person to bring up their options, but sometimes it just doesn’t work – and even when it does, it feels loose and broken. Some text just flickered constantly for me, and didn’t explain why this was happening. Regularly, the game seemed to jump forward in time before I was ready, and I had no idea why it was doing so.

But bad English and fiddly controls aside, the game itself doesn’t feel very strong either. As noted, you find your way through the story by selecting options for each of your survivors. The problem is that there’s no logic behind what works well and what doesn’t – you’re essentially left to just keep making random decisions, and hope that people survive. 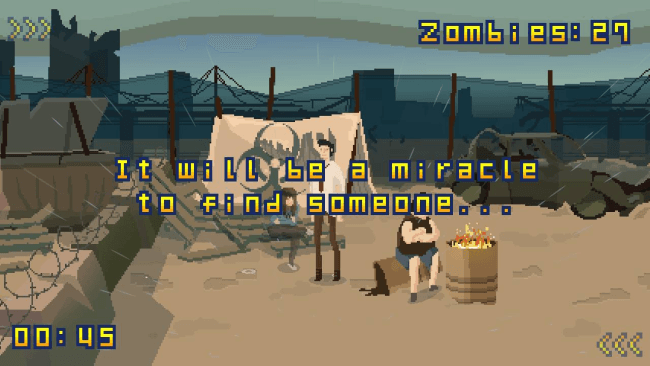 You don’t really have that much control over what is happening. Talking to people does nothing of interest, and so you’re left with a set of uninteresting options each day. Do you send that one person out to find survivors? Should that guy keep watch at night? Do I even care after a few days of hitting options at random?

The mish-mash that is a soundtrack rounds this confused package off nicely. Sometimes the music sounds pretty neat, and has a sinister vibe to it – yet other times it ventures into the realms of scratchy and awful, and I wanted to turn the noise down. It’s not really sure where it wants to go, or who it wants to be – much like the rest of the game.

Once Upon An Apocalypse has a certain something to it, but it’s not quite clear exactly what, neither to the player or to the developer. Instead, we’re left with a jumble of ideas that simply do not gel together in a cognitive manner.