Home / Reviews / Once Upon a Time in Chicago Review 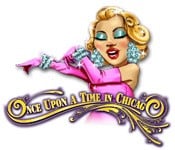 Down on your luck, alone and broke, you can always turn to the one place that can change your luck from downtrodden poverty to stinking rich in a matter of minutes – a casino! Once Upon a Time in Chicago is a rags-to-riches mini-game collection set in prohibition era Chicago. It sounds like it has the makings of a grand adventure, but this is one casino story we’re not betting on.

The main gameplay mechanic that uncovers mini-games is similar to Bingo or Keno. You’ll be given six different numbers each round, and you’ll match those numbers to another set of numbers displayed on the mini-game cards. When you match all the numbers on a card, it flips over for you to play one of the mini-games.

The gameplay in Once Upon a Time in Chicago is basic to the point of dull. Nothing in this game is more complex than you’d find in a common scratch’n’win ticket. In fact, many of the mini-games almost seem inspired by basic lottery games. Some of these will have you scratching off cards to find matching amounts. Others will have you randomly picking from different hidden amounts like a three-card monte game where everybody wins. Indeed, none of these mini-games are losable – no matter how your luck roles, you’ll get some kind of coin to add to your bank roll.

At first the actual gameplay is a bit confusing despite its simplicity. Little tutorials give you some basics to work with, but they often create far more questions than they provide answers. What is the significance of changing the number in the center of the spinner? How does attacking my AI opponent actually benefit me? These are the type of experiences we felt more than once after reading through the weakly-written tutorial screens. Some of our questions became answered in the course of play. Some still mystify us.

If you think you’ll be playing the game alone, think again. Each casino provides seven computer opponents – but we just can’t figure out why. You’ll have the opportunity to launch attacks against opponents, steal their cards, and be ranked amongst them based on your winnings – but none of it actually means anything. You’re not competing with these people. You won’t need to defeat them to move on to the next casino. They really serve no purpose other than to sit there are a confusing set piece in a mediocre game.

In an effort to add something outside of the actual casino time, you’ll be able to invest in enterprises between rounds. Mixing a half decent business simulation into this mess would have done wonders to improve the quality of the game, but once again Once Upon a Time in Chicago proves to be a simplistic bore. You’ll spend your winnings on new businesses by clicking "buy," and invest further in your businesses by controlling a slider. That’s it. Doing this will improve your finances, which will in turn help you get to the end of this awful experience with much greater haste.

The visual presentation was rather underwhelming as well. The art style is fairly crude and basic, and many of the character portraits are simply images from the mini-game cards re-colored and cropped. The story and tutorials are both full of broken English, like "LET JUST SEE, WHETHER I’LL LUCKY HERE."

Still, it’s not to say the game is all bad. The developers definitely made an effort to try and keep us on our toes by introducing different card types that could help and hinder us, and other little modifiers based on our performance. These little tweaks show that there was clearly some effort put into this title, but they don’t do anything to salvage the boring and repetitive experience that the rest of the game presents.

The idea of a rags-to-riches casino story isn’t new, and if executed right it could make for a very exciting casual game. Once Upon a Time in Chicago, though, completely misses the point. This is a casino game with no casino games. No blackjack, no roulette, no poker – nothing. There’s no competition and no way to lose. Once Upon a Time in Chicago is an endless series of number matches and card scratches. There is no skill, challenge, or thought required. While we can appreciate the idea behind this game, there was simply nothing to be admired in the approach taken.