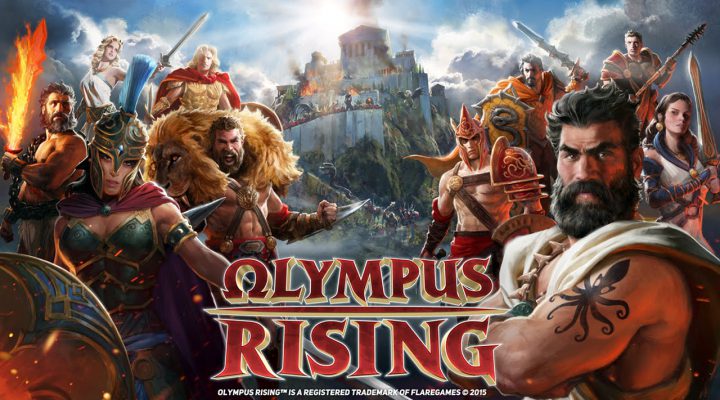 Leading troops through enemy defenses is fun and exciting.

The game has a nice narrative spin.

Heroes feel powerful and influential while using them.

Energy use fluctuates a lot, slow to refill.

Olympus Rising by flaregames is an exciting march through ancient Greece’s robust mythology. Players lead groups of Greek soldiers through deadly gauntlets assembled by other players. By directly controlling a powerful hero unit and dictating what troops are sent into battle and when they are deployed, players must strive to break through the enemy defenses and claim their land in the name of the gods.

As the story goes, Zeus and Hades became too popular in the eyes of the other Greek gods and goddesses. So the jealous deities rebelled against the two brothers, trashed Mount Olympus, and took over as many island cities as they could. Now, with the help of the player, Zeus and Hades set out to restore Mount Olympus and reclaim the island nations which fell to the jealous gods and goddesses. 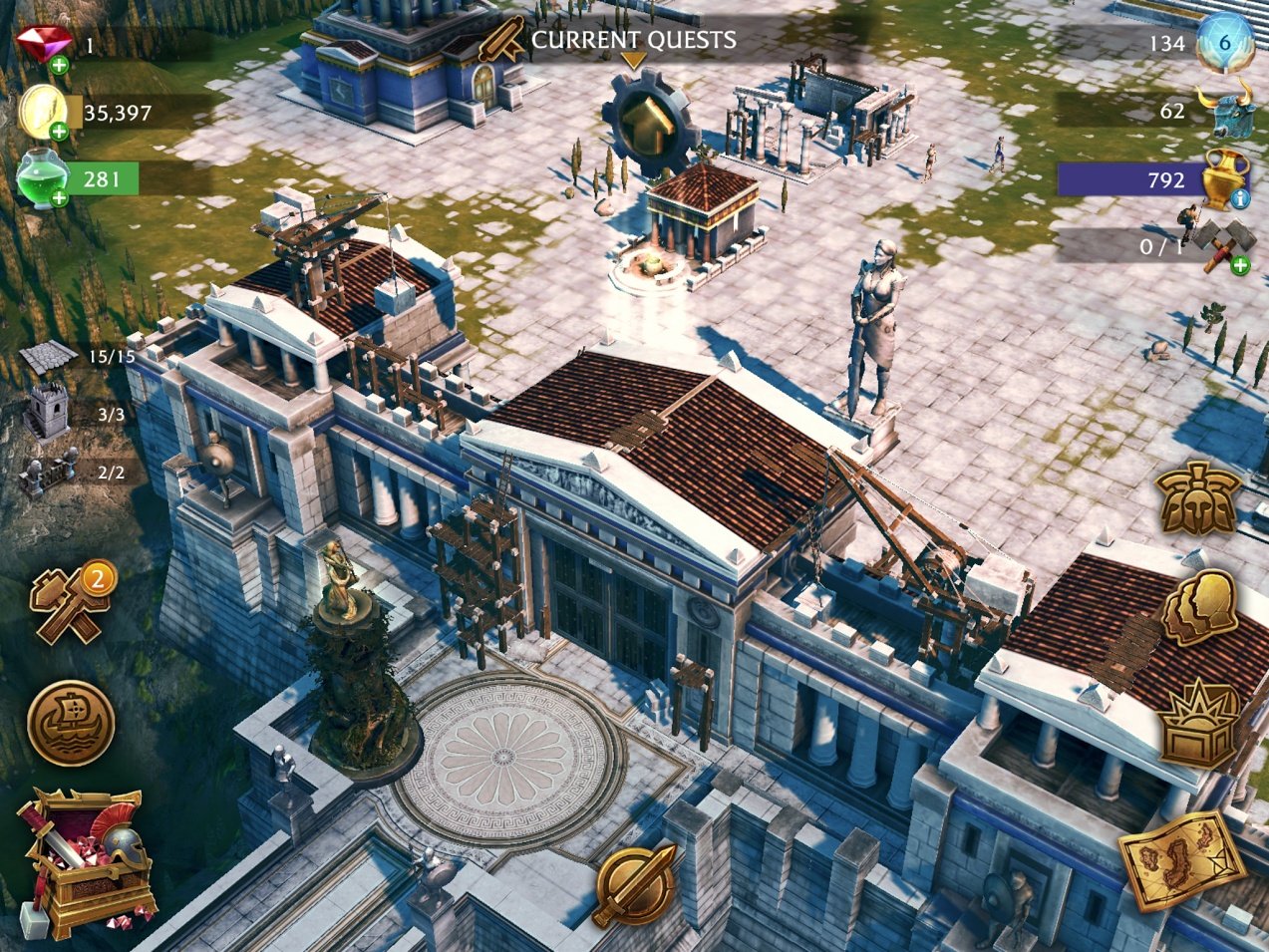 The Mount Olympus restoration project takes the form of a city management game where players work on building up the region by using workers and resources to build and upgrade a handful of buildings. These tasks are nothing new (or exciting). Players must wait out the timers or pay to have them accelerated in order to unlock advanced aspects of the game that allow players to tackle more challenging opponents. 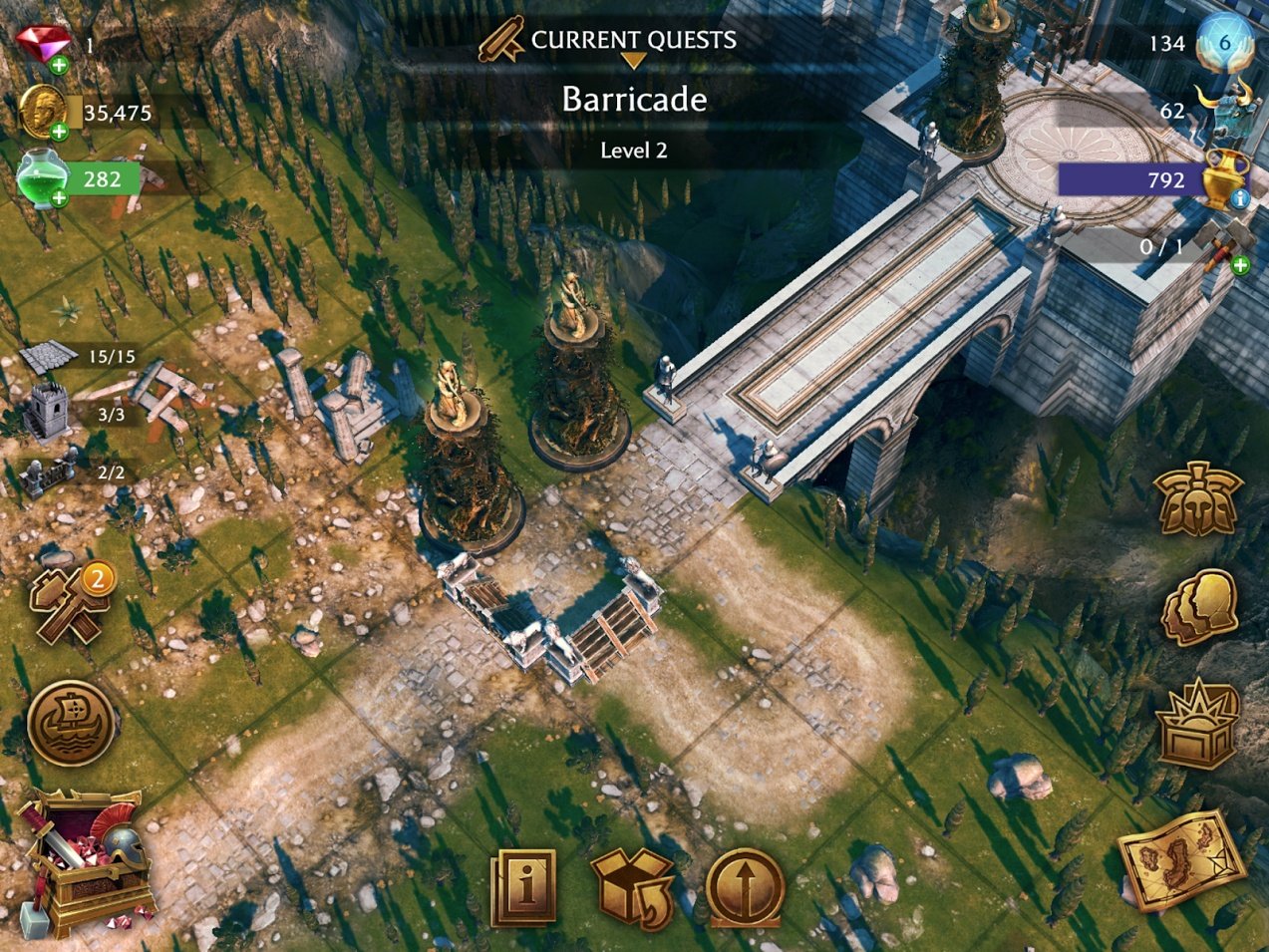 Shifting the focus from inside the walls of Mount Olympus to just outside the front gates, players will see a relatively open space that they will gradually fill with defenses and obstacles to prevent other players from invading Olympus and stealing resources.

For the sake of clarity: everyone has their own Mount Olympus island that they must defend against other players’ invasions. The narrative of the game just presents it like you are the sole protector of Olympus and all other players are the bad guys. It’s a neat narrative angle that helped combat the feeling of “just another castle on the map” (or in this case, “just another island in the ocean”) that comes with playing games that involve city management and invading other player’s cities. 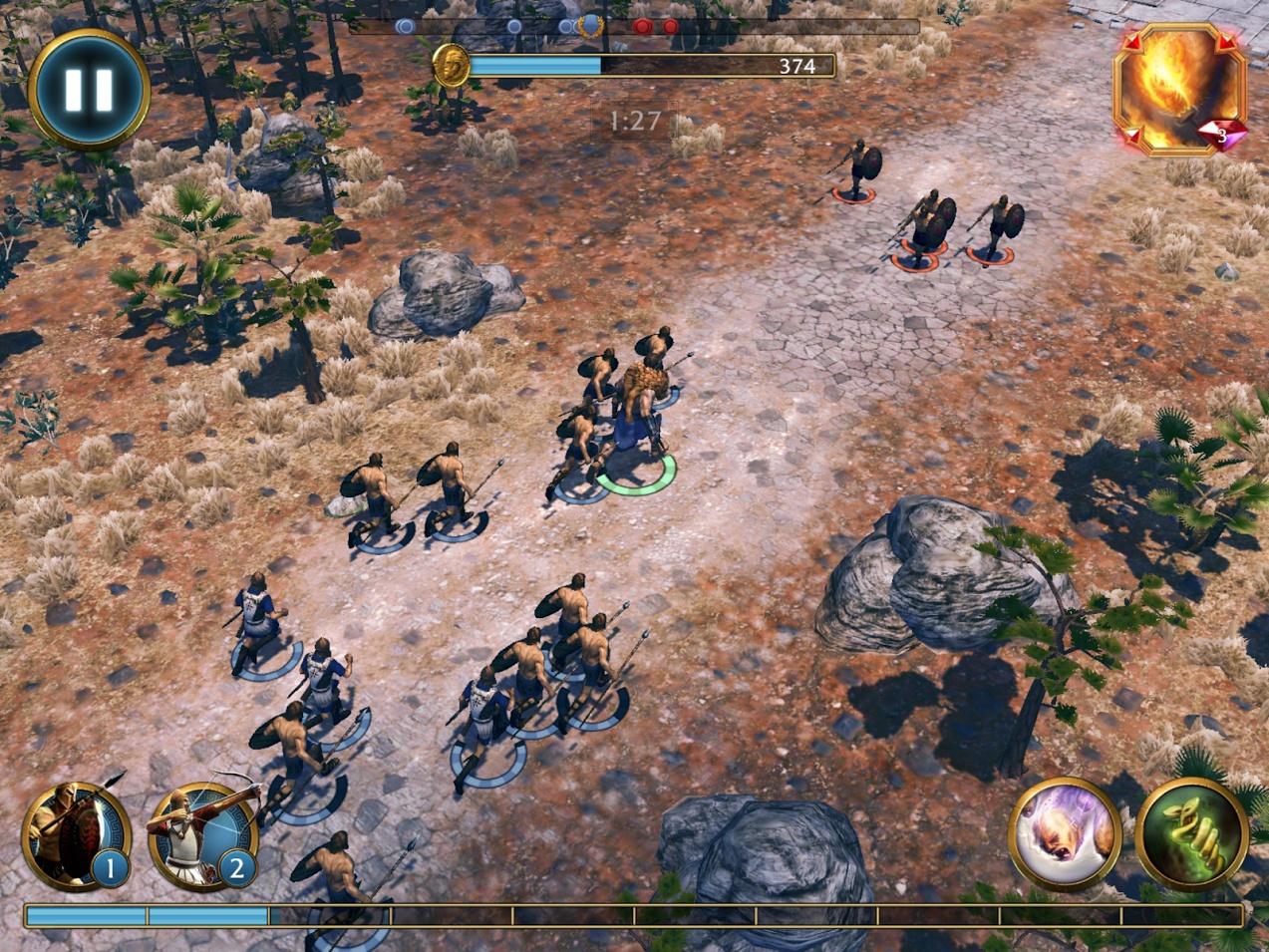 Invasion involves light real-time strategy elements that are reminiscent of a lane in a MOBA game like League of Legends. Players control the friendly minion spawn rate, summoning in archers, warriors, and other units as needed. The mana utilized to summon in units quickly regenerates, so players can keep the pressure on the enemy’s defenses when the casualties begin piling up. Players also control a hero unit; Hercules (even though that’s the Roman spelling) and Prometheus were the first two I gained access to. Each hero has special abilities that the players can utilize to benefit the troops in one way or another. Loot and experience points collected from victory serve to strengthen the hero’s stats, allowing them to effectively conquer more territory across the game’s map.

Leading my troops into battle as the hero unit was as exciting to partake in as it was to behold. Each individual soldier is animated, so you get to watch them clash among themselves — and as a hero, your abilities can seriously impact a battle. Dashing into a wave of enemy units made me feel powerful; crashing through them all and leading my men in our continued assault of the enemy stronghold. 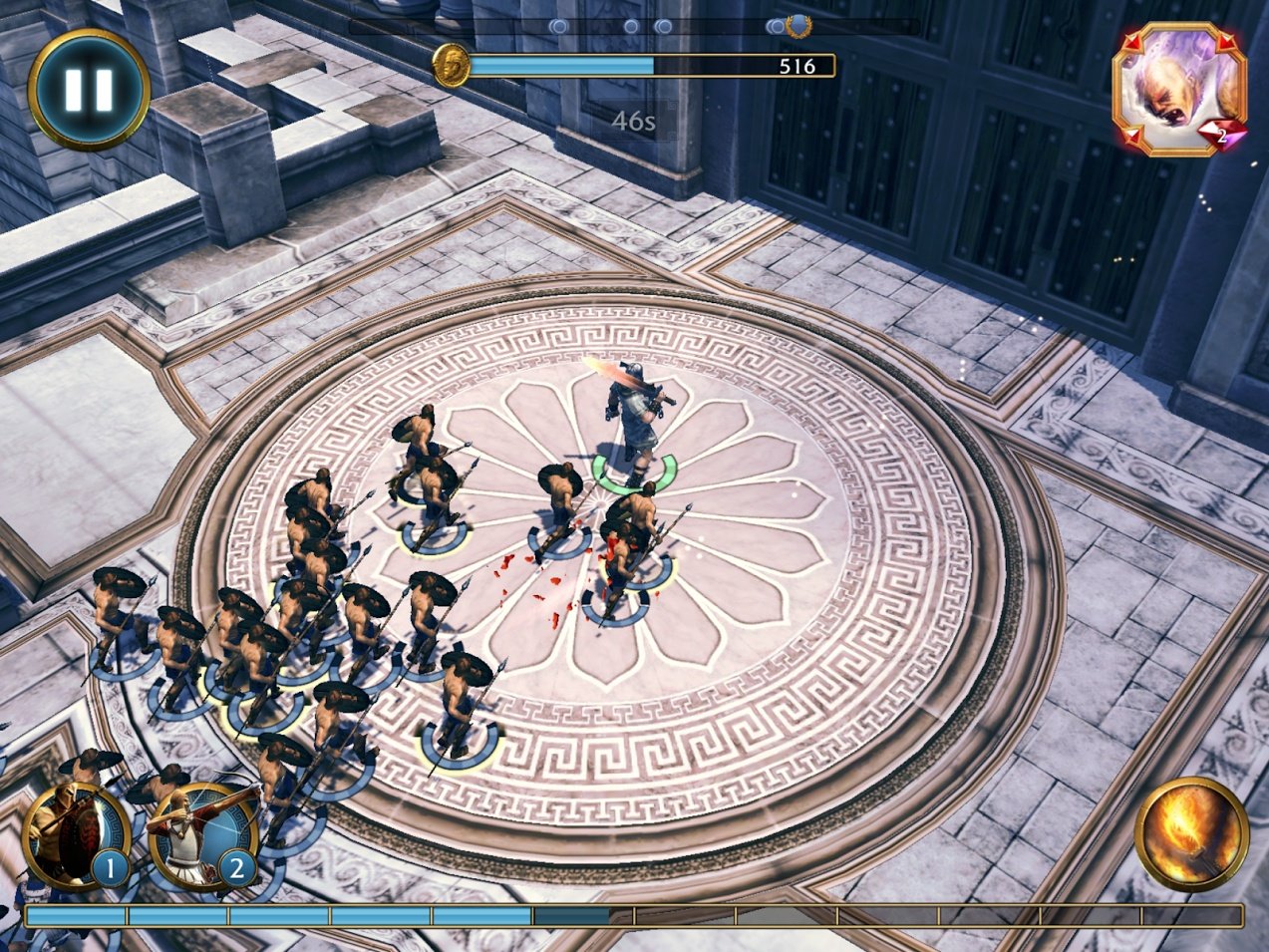 The multiplayer map is a vast ocean with small islands scattered about. The more islands a player controls the more resources they gain over time, prompting serious players to seek out as many islands as their armies can claim. After the first few islands, players begin to encounter islands held by other players, and that’s where the real war begins. Olympus Rising is very much a tug-of-war across island chains.

In one bout of gameplay you may gain control of four or five islands, but you’ll come back later to discover that you’ve lost three of those newly claimed islands to one of your neighbors. The islands not only act as a resource generation object, but they essentially shield your Mount Olympus island from direct invasion that — if your enemy is successful at penetrating your defenses — can be a costly loss for you. 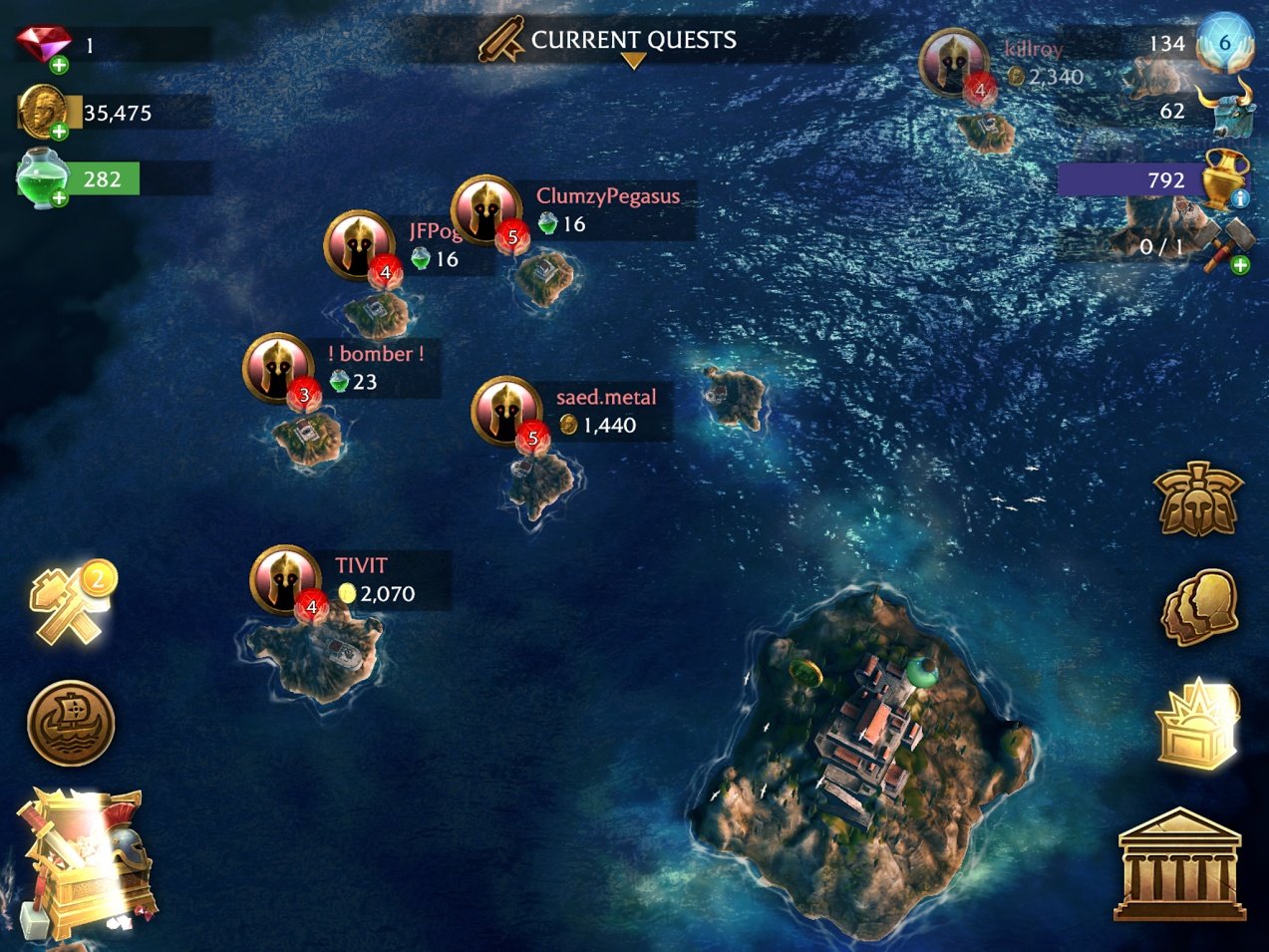 I quickly learned that the price of war in Olympus Rising is costly. The game’s energy system isn’t uniform; the cost of an attack can vary from island to island. One island may cost 80 ambrosia (energy) to attack, while another might cost a few hundred ambrosia. It all has to do with the distance your armies must sail to reach a destination. The further away an island is from the location of your hero, the more ambrosia is required to get there.

If you’re willing to pay, this is not an issue as you can travel as much as you’re willing to spend on ambrosia refills. But personally, I’d rather spend my money on a permanent object than on travel to an island that I may have lost by the next time I log in. Ambrosia also regenerates slowly, so if you’re unwilling to pay for refills, you’ll basically have enough ambrosia for taking just a handful of islands each day.

That’s the most frustrating thing about Olympus Rising. The actual gameplay is fun, and I really enjoyed battling my way through enemy defenses — but I’m so limited by how much gameplay that I can get at a time. And in my opinion, it just wasn’t worth it to spend real money on fuel — a commodity that gives me no guarantee of successfully capturing an island, and no guarantee of keeping it if I do. Permanent item unlocks I can get behind, but limiting fuel so harshly without spending money? In keeping with your overall Greek theme, I believe we’ve found your Achilles’ heel, Olympus Rising.