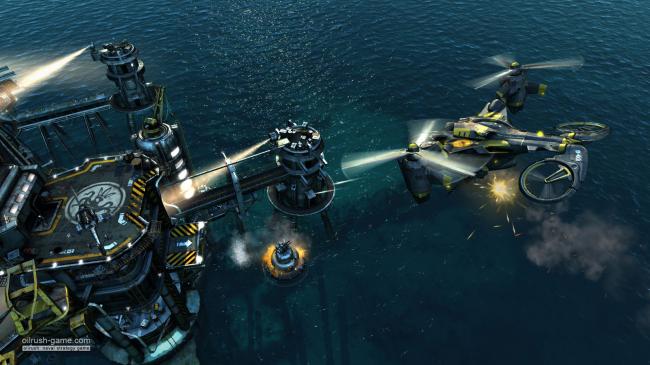 Hybrid game genres can sometimes be obvious, but for the most part, the ones that stick out the most are those that you never really considered before. For some reason, combining real time strategy and tower defense never crossed my mind. Luckily the Russian team Unigine Corp were wearing their thinking hats on the day they came up with Oil Rush, which is billed to combine the two genres. It’s no secret that I’m a big tower defense fan, but I’ve always found RTS games a little much to wrap my head around, despite trying many different times. Either way the split happens, there’s never any doubt that Oil Rush is a strategy game through and through.

Oil Rush is set in a world that has been completely engulfed by water, and oil is the most precious commodity in existence. So naturally there is a constant struggle to maintain control over its diminishing supply. You’ll command your aquatic army to take over and keep various bases, whether they produce units, gather oil, or provide defenses. There’s no direct control over units, which might throw a lot of RTS fans off for a few levels. Instead you’ll select a platform, which in turn automatically selects 25, 50 or 100% (you control which) of each type of unit currently circling it. You can then send those units to another platform where they’ll gain control if unoccupied, or battle the defending forces to clear it out.

This constant struggle to maintain control will keep you on your toes the entire way through the campaign. You’re constantly monitoring all of your bases at once, making sure to simultaneously protect your oil supply while gathering large groups of units to take over everything on screen. It all feels a bit unwieldy at times, but once you get in the flow it feels great to keep your momentum going. Oil Rush definitely feels more RTS than tower defense, but it’s one of the most accessible strategy games I’ve ever played.

Recently there have been a few games in a row that I’ve reviewed where the difficulty ramps up rather quickly, and caused me to struggle earlier in the game than I feel like I should. Oil Rush is no different. At the normal setting it doesn’t take much for the enemies to completely stop you in your tracks and break all the momentum of your progress, which is very hard to get back in your favor. Also, the game had quite a number of technical issues that I had to rummage through forums to find solutions to. None of them were game-breaking, but there were a few crashes and some trouble getting the game loaded on initial boot up. I’m sure the developers are already on top of it, though, and this should not keep you from checking Oil Rush one out.

On top of everything Oil Rush has going for it in the gameplay department, its visuals look absolutely stunning. The lighting and water effects are easily on par with almost any big budget major release. Powered by their developers own UNIGINE engine, Oil Rush pulls off the kind of tricks you’d expect from Crysis without needing half as powerful a system.

While the game doesn’t completely deliver as advertised on the RTS/tower defense pitch, what is there is a really fun and unique take on strategy gaming. Oil Rush is another great example of why the PC indie gaming scene is one of the most exciting and interesting ones out there. At its reasonable price tag, you’d be a fool not to give this one a go.