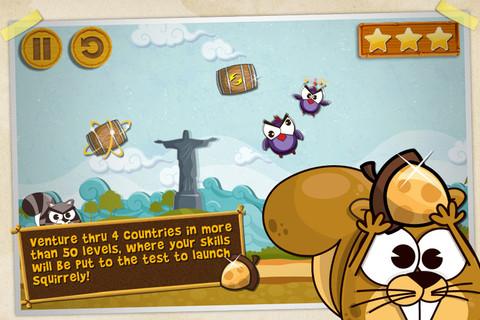 Oh My Nuts wants to fly with the big birds, and lands pretty close to target

Ever wish for a game that combined the slingshot physics of Angry Birds, the star collecting of Cut the Rope, and the barrel cannons of Donkey Kong Country? If so, you have very specific tastes, and Gara Entertainment’s first physics puzzler, Oh My Nuts, is a match made in heaven. Even if this zany combination sounds like a disaster at face value, Oh My Nuts’ physics-based squirrel-throwing app delivers an unexpectedly charming, albeit short, experience.

The story is about as wacky (or dare we say, nuts) as can be: you play a squirrel launched from the mouth of a pig in pursuit of a large nut. Obstacles in your way include laughing raccoons, levitating logs, and angry birds (yes, you read that right). With a visual style that aims to compete with Rovio and Chillingo’s hit franchises, Oh My Nuts has a lot going for it.

Controls appear almost identical to Angry Birds. One finger pulls your pig’s tail backward, while releasing launches your buck-toothed companion into the air. Pinching or pushing with two fingers allows you to zoom in and out of your surroundings. Your main goal is to reach the glowing acorn at the end of each stage, while collecting as many stars as you can along the way. Gameplay shifts from simple to complicated fairly quickly, but tutorials help guide you whenever a new element is added to your adventure.

For the most part, Oh My Nuts contains all the pieces in a successful casual iPhone game. The pig-to-squirrel “slingshot” contains the perfect amount of adorable visuals and sound to make for a likable premise. Seeing our delightfully cute squirrel companion both whimper in failure and hop for joy in victory only made us more determined to successfully deliver him with each stage. Level-based gameplay remains a perfect formula for quick bursts of playtime.

A nice variety of gimmicks keep each stage interesting. Trampolines, different barrel cannons, and even Portal-style teleportation devices guide you along the way. These exciting additions keep gameplay from getting repetitive, while also remaining genuinely fun. Each level becomes its own unique and challenging puzzle, constantly encouraging you to collect all three stars.

However, while the learning curve guides you through each new obstacle well, the difficulty curve rises pretty quickly. For the most part, challenge is in the hands of the player, but occasionally awkward physics might leave some players frustrated. For example: despite hitting some pretty high speeds while flying through the air, your character will stop on a dime the second he hits the ground. Too many times, we found ourselves a mere inch away from an acorn, only to be met with a crying squirrel that wasn’t fond of touching the floor. 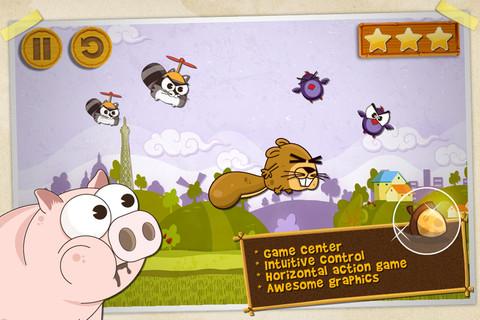 Another thing that keeps some stages frustrating is the level design. Many stages require precise timing, such as clearing through a duo of floating logs before they close together. However, the game only allows you to zoom a small distance back when surveying the stage, leaving a handful of puzzles that force you to cross your fingers and pray you launched with perfect timing. Some stages also felt a little cluttered for the smaller iPhone screen (and there’s no support for a dedicated iPad version as of this writing). While these issues didn’t ruin every stage we came across, they definitely kept a few stages feeling far more challenging than they should have been.

Ultimately, though, Oh My Nuts offers a great time. The fun far outweighs the frustration, which leads to our final complaint: we want more levels! While 60 unique stages over four different countries is a nice helping of an addicting iPhone experience, it still pales in comparison to the near 150 stages offered by both Angry Birds and Cut the Rope – though admittedly many of these came after multiple updates. Our adventure concluded with a message from Gara stating that more levels will be available in the future, so I guess we’ll have to wait until then to truly have our fill.

The best-selling (and most addictive) iPhone apps are easily identified by their appealing visuals, fun gameplay, and great value. While it could use a little polish and expansion, Oh My Nut‘s colorful presentation and memorable physics puzzles make it well worth its budget price tag.