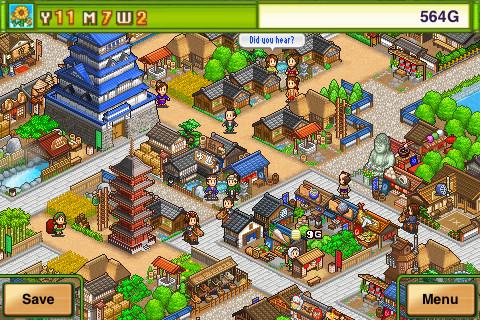 Reviewing a Kairosoft game at this point really means comparing and contrasting it to the multitude of other games they’ve released. It’s kinda like this one, straying from the formula of that one. Yadda Yadda. Spoiler Alert: That trend will continue in this review. The good news is that Oh! Edo Towns, while sadly closer to the Kairosoft titles I didn’t like, has made some good changes to start bringing me around.

Ever since Game Dev Story, Kairosoft has been blazing two trails in their games. One in which the point of the game is to develop a product, then see how it performs. So far we’ve done that with Game Dev Story, Grand Prix Story and Pocket League Story. Then there’s the other track, where we’re doing some civil engineering and engaging in some light SimCity-style action with Hot Springs Story, Pocket Academy, Mega Mall Story – and now Oh! Edo Towns. If you’ve played some of their games before, you’ll kind of know what you’re getting into here.

Similar to the other “civil” games, your job will be to create and cultivate a small Edo town in Japan. You’ll build vacant lots to attract residents, then expand to construct fields for crops, stores, libraries, food shoppes and more. Your residents will get jobs in this emerging economy, some better suited than others, and you can manage both how the buildings operate and what jobs the residents are doing. Your goal is to have a high “yield” at the end of the year, where they compare you to other Edo towns.

It’s all very standard if you’ve ever ever played a Kairosoft game, and if you liked them there’s a good chance you’re going to enjoy this one. If you didn’t like Hot Springs or Pocket Academy though don’t fret… I didn’t enjoy them very much either, and Oh! Edo Towns takes steps to fix a lot of the issues I had with those games.

The main issue I had with them (Pocket Academy especially) was the lack of instruction on what to do and how all the pieces fit together. But it’s addressed with very clear and concise explanations during the “newspaper” sequences, when they give you a low down on operations. They also address when people and places go up levels or first do something new. The game stops and directs your attention to it, and gives a quick explanation of what’s what. It’s a godsend, and makes Oh! Edo Towns a lot more fun to play. 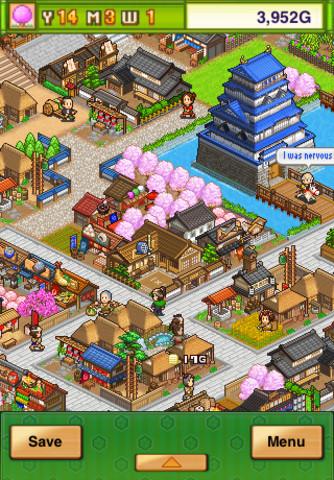 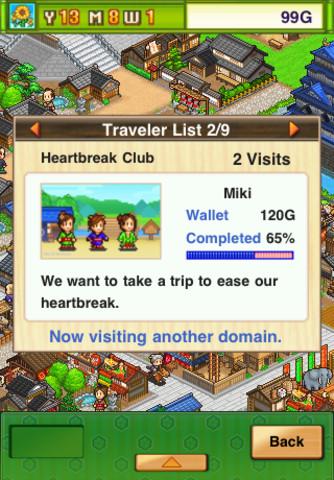 If you’re a fan of the casual simulation game, the truth is you should really be on your hands and knees thanking Kairosoft for releasing so many fantastic games. While they’re all somewhat similar, adhering close to one of the two templates they’ve established, they’re all for the most part quite fun. Oh! Edo Towns doesn’t come close to the highs of Grand Prix Story or Mega Mall Story, but it’s quite a bit better than Hot Springs Story and Pocket Academy in the town building area. It’s definitely worth playing.